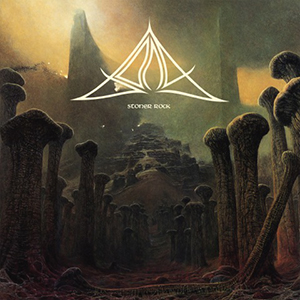 Bong are having a laugh – and you are welcome to join in. For all their heaviness and summoning of The Elder Gods, they read their old reviews, stuck their tongues in their cheeks and said “if you call us Stoner Rock, that’s what we’ll be”.

“It is a tongue-in-cheek dig at our usual classification as stoner rock and what the term has come to represent. The idea is to create our own definition of ‘stoner rock’ by creating an album so utterly stoned and repetitive to be a million miles away from the usual definition.”…they continue…”Those who know Bong already will get both the humour and the philosophical redefinition… those who don’t know us will either get it when they listen or will never understand Bong at all.”

The last album I heard was the excellent Mana-Yood-Sushai but the opening track here makes that sound like Miley Cyrus. There are still two main movements but these are soooo long – each 37 minutes long, almost certainly edited to be the same as part of the whole picture.

Polaris, the opener, has a portentous monologue before ten minutes are up (less than a heartbeat in Bong World when dead Cthulu undying lies). Riffage is more insistent than that to come but still glacial in pace. It is the heavier of the two pieces and gets mind-quashingly intense in places and, being Bong, those places are biiiiig. Bellowing ensues.

Out Of The Aeons is what passes for a rest after a tense first half. A drone sustains, swells and ebbs, a feeling of being stoned creeps up. Gentle noodling rides atop endless fuzzed riffs (if you can call one chord a riff). Imperceptible shifts in tone arrive – the riff gets heavier or the noodling hangs for a while. If it weren’t for that, this could almost be a Buddha Box loop. Twenty minutes in, a Lovecraftian monologue about Yoggoth gives a Hawkwind air to things. Somewhere, sometime later, things draw to a close.

For Bong, it is never about how many ideas you can pack in, it’s about how deep the sensations you can conjure up. Here they will unnerve you again, in different ways to last time.