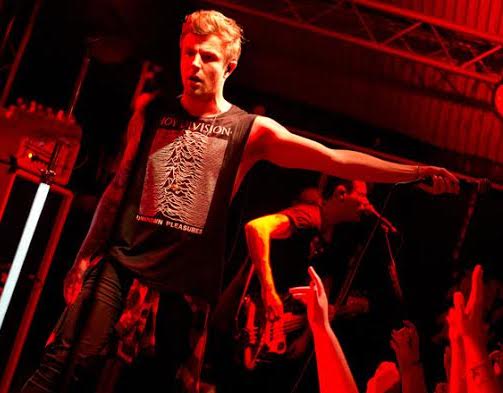 2014 is lining up to be a fantastic year for Blitz Kids. Their new album “The Good Youth” has received incredible reviews and is being cited by fans and critics as their best work yet. With the single track “Sometimes” starting to get good circulation on Radio 1 and a sold out album release tour it’s safe to say Blitz Kids are really starting to make a name for themselves in British rock.

Tonight Blitz Kids conclude their release tour with a final show at The Cockpit, the venue is sold out and the queue is already screaming out the new single in anticipation. There is an excitement in the air that only comes from die-hard fans anxious to get their faces melted, most of whom having already experienced the explosive style of performance Blitz Kids are capable of.

Before they take to the stage the crowd are warmed up with an impressive set of opening acts; local bands Kill The Silence and The Wilde both coming out with loud and aggressive performances that are clearly starting to gain a lot of support with the home-crowd. Cumbrian-Punk band Colt 45 are next and really get things going, they deliver their sound fantastically and front-man Neil Harper has the vocals to back it up. With increasingly high-profile performances and a tour about to kick off in March, Colt 45 are definitely one to watch out for.

The crowd are at bursting point by the time Blitz Kids hit the stage, a mosh pit has formed in preparation and everyone in the room is pushed to the front. Lead-singer Joe James raises his hand to the crowd and begins a frenzy that continues long into the after party. Kicking off with the intro track to their new album “All I want is everything” it is immediately clear that Blitz Kids have an extraordinary effect on their fans, the room is bouncing, fists in the air, and at points there seem to be more people above the crowd than in it. The new album plays well live, single tracks “On my own” and “Run for cover” especially so. Rhythm guitarist Jono Yates pulls off some tricky mid-song guitar changes and really gets to show off during “Title Fight”; an album track rapidly becoming a fan favourite. Drummer Matt Freer is powerful but doesn’t dominate the sound, difficult in smaller venues, but manages to draw focus when the songs demand it.

Blitz Kids energy doesn’t let up the whole way through the set and it’s obvious from their stage performance how much they love their fans as well as how much fun they have playing live. The set comes to a close with some of their older material, ending with an encore of “Warrior” as well as “Never Die” from their 2012 EP.

It’s not in Blitz Kids nature to rest on their laurels and 2014 seems like no exception, already booked for some of the festival circuit and blowing up on social media, it is unlikely this year will see them break their habit of constant performing. While they keep getting reactions like this, it’s easy to see why.