A few years ago I remembered this festival as a place where a large number of people get outstandingly pissed. I remember walking in over a sea of vodka bottles, hastily necked before entry. Times have changed. Now it’s a family festival, lots of Mums and Dads with kids or teens on their own. Middle aged Dads enjoy the older big name bands, teens enjoy the up and coming or mid-rank bands. Others hang around the huge kids play area or lie around soaking up some lager and bustle. There is still the odd comedy drunk but now they are funny rather than a nuisance.

I’m going to give some brief notes and comments but mostly let the photos tell the tale. 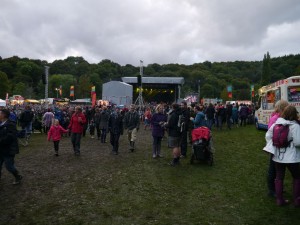 Thankfully the weather holds and the slightly damp ground allows a sprawl on picnic blankets next to a pushchair or a huddle with ice-cream, beer and festival noodles. During the long reaches of the afternoon, where people like Bipolar Sunshine play the odd thing half-recognised, many allow it to become a blur of sound and beat to accompany a day out, mustering resource to sing along to big acts of a decade or two back. Bingley seems to excel in that – this year Shed Seven and The Pet Shop Boys, last year Chic. Example breaks the pattern with some cheesy dance music and friendly rap that’ll keep things vaguely contemporary without alienating anyone. 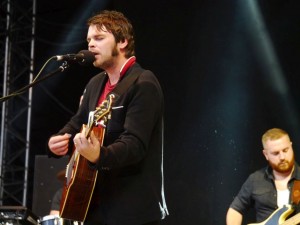 Jaz Coombes played a crowd-pleasing set. A long way from the zippy early days of Supergrass, the mellow and full songs included plenty of new and recent ones, yet still went down well, thanks to his firm grasp of a good tune. 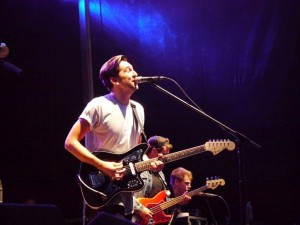 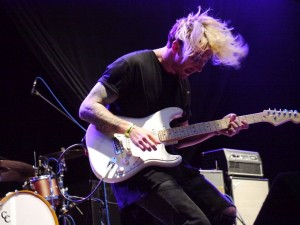 The madly disparate Eliza and the Bear got a good reaction on the second stage. They might be a fusion of Athlete and The Maccabees and destined for the place all once-popular indie bands go (the £2 pre-owned shelf in Morrisons) but for now they are sparky, loveable and fun. 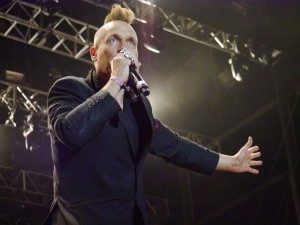 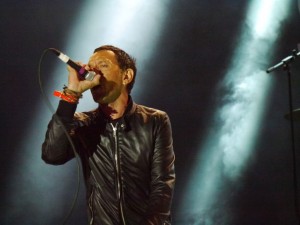 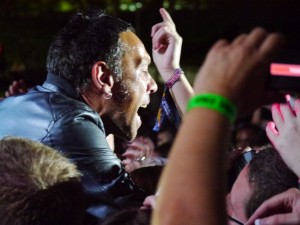 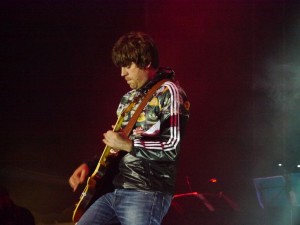 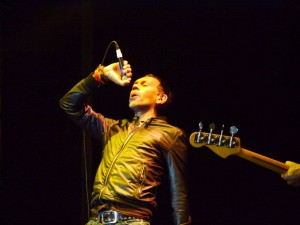 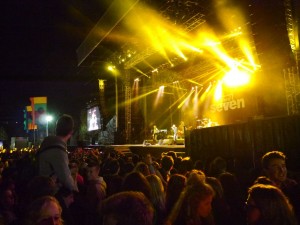 Shed Seven are a perfect Bingley band. At one point reduced to annually pumping out the hits for people who were at college or university when Going For Gold came out, their true home as a festival band brings out a fire in the performance. From the outset, Rick is leaping about and doing his twisty baggy dance while crooning out the chorus of a string of songs you heard on the radio way back when. It pleases the Mums and Dads, it provides an acceptable backdrop to the teens trying to neck flavoured ciders and get off with each other. “Yorkshire, Yorkshire”, chant the crowd, “We’re Shed Seven”, says Rick, “but it says that behind us. You’re telling us where we are, we’re telling us who we are”. He leaps into the crowd and genuinely seems to be buzzing on being in front of a big, appreciative audience. When the band cover Springsteen’s Born To Run, a few Dads wet themselves with excitement and the Bingley circle is squared – this festival ain’t about cool, it’s about fun. Needless to say, the closer, Chasing Rainbows, sees mass singing along. 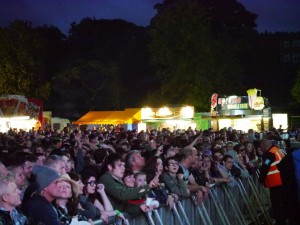 One of the nice things about Bingley is the beer cup price. At 10p, its not worth hanging on to them to return but well worth some kid rounding them up and fetching back a pile. Result: a tidy field and some happy kids. Sunday is the busiest day, hotching with deckchairs and picnic blankets, families soaking up sun or splitting to find their taste in bands. 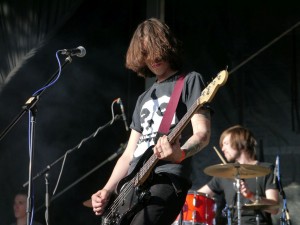 The Wytches meet one need with their quality slacker grunge and two of Ocean Colour Scene meet another with a sound exactly as you’d expect. 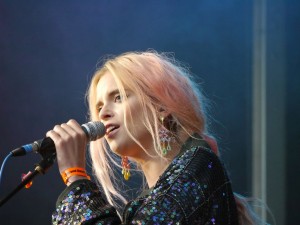 The small stage sees the ballady chill-pop of Kyla La Grange, helped by her preternatural prettiness. Confident and chatty, Kyla fronts a band heavy on the keys, expertly drummed and never overpowering the cool vocals. 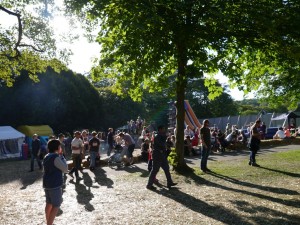 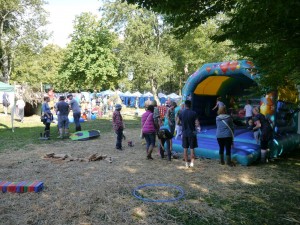 Naughty Boy do what they do- undistinguished soul, heavy on the bass. It goes down well with people addled with sun as a succession of female vocalists arrive. Their cover of One Love probably sums up the set. 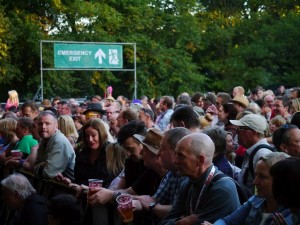 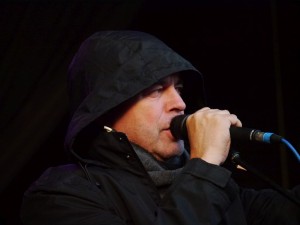 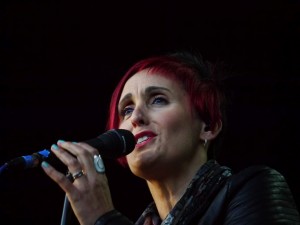 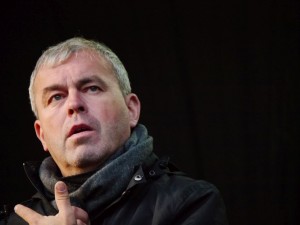 The South are another iteration of The Beautiful South, minus Paul Heaton. Their crowd is packed tight with standees and picnic blanketers defending their tartan empires. The crowd grows and grows as people are driven off by the Naughty Boy pap and their set of MOR acerbity goes down nicely. 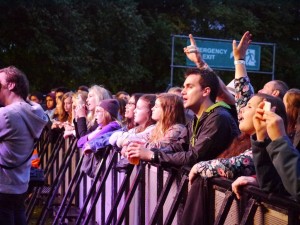 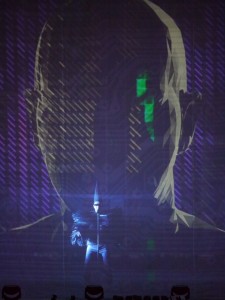 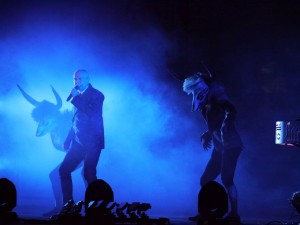 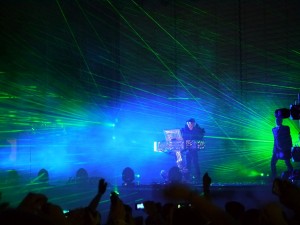 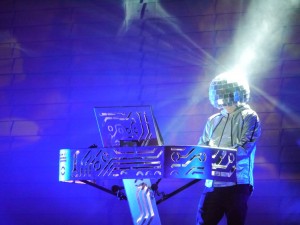 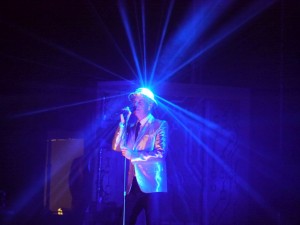 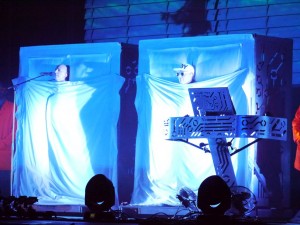 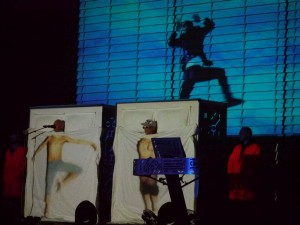 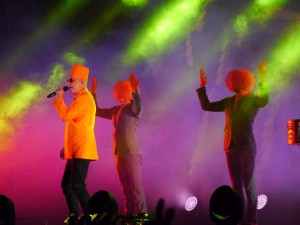 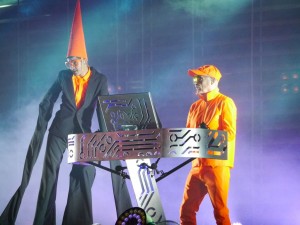 The headliners for the event, The Pet Shop Boys, make a big prima-donna fuss of things. They arrive nearly half an hour late, perhaps waiting for the sun to set, and refuse to let photographers into the photo-pit in front of the stage- banishing them to the sound-mixing tower. Perhaps they are scared of anyone getting a close up of their wrinkles. To add to the weirdness, they perform the first three songs from behind a mesh screen and the fourth in silhouette. Style or fear of cameras – your call, readers. That said, the set is very clever. Faced with much the same problem as Kraftwerk – you can’t expect the rock setless set to work when you have two men, one behind a keyboard. Fantastic visuals, hilarious costumes, dancers, projections and themed blocks of songs made for a visually ravishing show. At times the only performers on stage were dancers, with music supplied offstage – there were always going to be questions about how much was live, how much on samples, tapes, sequencers, etc. Gimmicks like using only their heads atop projections of dancers on a sheet on a vertical bed were exciting and funny – allied to hearing old big pop hits, it made for family fun.