Rock and Roll, Rock and Soul, Blues Rock, Rock-a-Boogie; there are a lot of words you could try to capture Barrence Whitfield’s act with. It’s a loud, fast, hyperactive show of the old school. Barrence fronts a rocking blues band and thumps out loud belters. Some hark back to the early days of rock, some, like the cover of Timmy Willis’ I’m A Full Grown Man, come over like Sam and Dave plugged into the electric grid. A four piece band provide a loud, non-stop rocking backdrop to Barrence’s full-throttle vocals. 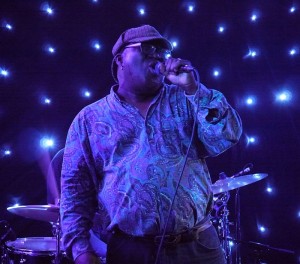 Rocking a pair of borrowed Gromit slippers and a tweed deerstalker, he makes a genial host, explaining and introducing songs, chatting about the night and telling us how sweaty he is. He’s very sweaty, he says, sluicing sweat off his bald head as he tells us how rock and roll depends on sweat, even on a wet Tuesday night in Leeds. By his side is Peter Greenberg, playing superb, solid blues guitar solos. The rest of the band is good too and sax adds colour to the frontline. By the end of the second song, the relatively small crowd in the bijou Brudenell Games Room are true believers, experiencing the sort of show fans of The Blues Brothers film can only dream of. Hint to readers – great shows are out there – just get out and catch lots of live music – MP3s and CDs just don’t sweat, as Barrence will tell you. 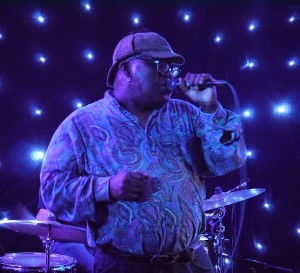 Song lyrics are solid, simple and cover the usual bases, plus a few novelty items. Incarceration Casserole tells the sad tale of a man who, as Barrence puts it, shouts “I can’t cook, I got no food, my wife is in jail, I’m hungry”. Bloody Mary has a long history behind it, Willie Meehan hymns an underdog boxer and the closer has the best title I can remember:  “Mama Get The Hammer, There’s A Fly On The Baby’s Head”. Andy Kershaw is a fan and introduced the band then joined the crowd, grinning widely. There’s not a massive amount of variation, beyond a few songs being slower and bluesier but that isn’t what this is about. This is traditional blues rock to make you dance and shout. I went home with tired but happy legs, having wobbled and joggled my way through The Georgia Slop and a stack of other belters. 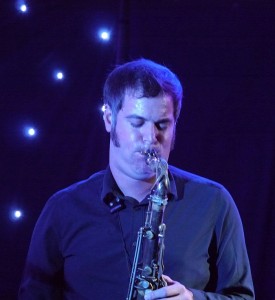 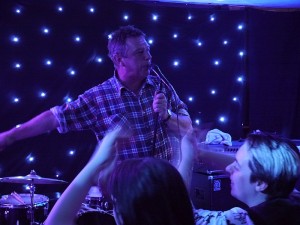