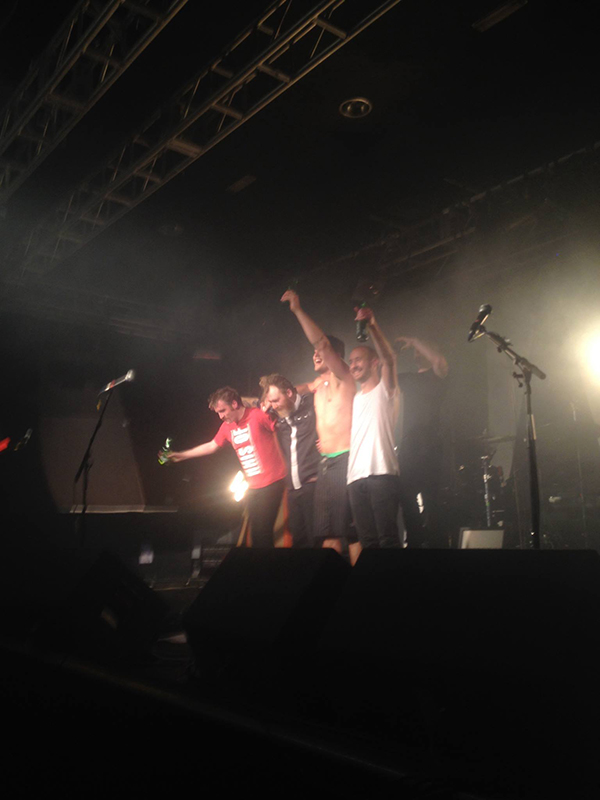 As their only home show of 2015, local heroes And So I Watch You From Afar took over the Mandela Hall in Belfast for what was one of the best concerts I have been to this year. The venue was already buzzing as soon as the doors opened, and when the specifically organised bus from Portrush arrived, the atmosphere only increased twofold. I could tell then, at 8.30pm on a Saturday night, everyone at the venue was in for a great night.

The night was opened by an electronic trio called “SKYMAS”, and I was the most happily confused I’ve ever been at a concert before. Their sound was welcomingly invasive, and made you want to dance non stop, which the crowd did. Their frontman had such a good stage presence, and was completely present and in the moment while performing, which made it all the easier to listen to. Accompanying their music, they had screens of animated people dancing which again added to their overall presence in the relatively large venue. While their music style doesn’t really fit with ASIWYFA’s and probably won’t appeal to everyone, it somehow got everyone pumped for the main act, which is what a good support act does.

After SKYMAS, there was a good 45 minutes in between sets, making the excitement in the air almost tangible. When ASIWYFA finally walked on stage, the sound from all corners of the room was deafening. Opening with the smasher “Run Home”, the crowd instantly went mental. ASIWYFA always meticulously pick their setlists so that it’s one perfect run of music to get lost in, and I have never experienced a band who does that so well. Every single song that was on the 16 song setlist all blended perfectly with each other, making it hard to pick out stand out performances. They featured songs from every single release, which is a great homage to all fans the band have picked up during their 10 years of making music, making this show especially, a very personal one. This was evident by how many times guitarist Rory Friers jumped off stage and climbed into the crowd, and by his emotion filled speeches during set breaks. Friers made note of how it was fathers day on the 21st, and mentioned all of the band’s family members on the balcony of the venue, then introduced his brother, Axis Of lead singer, Ewen onto the stage to belt out the tune “These Secret Things I Know”.

This band have such an amazing stage presence and command your attention, not only with their head frying guitar riffs, but also with their amazing staging and lighting. The lighting and visuals to this gig were indescribable and they definitely need to be mentioned as one of the main reasons ASIWYFA are so enjoyable to see live. Not only do each of the members throw themselves into their performances so entirely, everybody that has worked with them to put on the show does the exact same. I’ve never been to a concert where you can physically feel the amount of love and effort that has gone into a show before; maybe it was because it was the band’s only home show of 2015, but the atmosphere in Mandela Hall really was one of mutual love and admiration from the crowd and the band.

Closing their set with their two encore songs, “Set Guitars to Kill” and “The Voiceless”, ASIWYFA ended the night beautifully. Onstage hugs between the band, meeting in the middle of the stage to play their songs facing each other and gestures and looks of astonishment to the crowd made it so visibly clear to everyone in that room just how much that night meant to each member of that band. If you haven’t seen ASIWYFA live before, I would recommend it. They’re incredibly talented guys, who are revelling in everything that is happening to them presently, and that is such a great thing to be a part of as a fan.