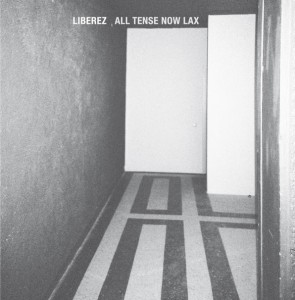 Impending dread is an emotion like no other and definitely not one you’re likely to invite upon yourself. But when your fear turns out to be unfounded, was the exhilaration from the moments of terror not worth it?

This exhilarating dread is the power behind Liberez, All Tense Now Lax. Creepy, unnerving and challenging, this difficult record is at war with one’s own boundaries. About a minute into Grateful Family the bombardment begins. Sometimes it’s the all-out assault of industrial noise, other times it’s the sliver of electro beats that can send a shiver down your spine.

There is melody, but it’s never singular. When something serene is offered, like the soft drum on 419 Chop Your $, an irregular violin rhythm arrives to unsettle you again. The feeling of an alien communication is constant, but is it trying to warn or mock? Being told over and over again that it’s just a game makes you feel like you are being prepped for horror.

Some say Industrial music is at its most potent when listened to through headphones, and this is certainly true for All Tense Now Lax . The solo listening experience allows the startlingly unnerving vibe brought on by the manic typing at the start of Grease the Axies to flood your mind. When you add to this a bubble-wrap popping beat which morph seamlessly into tribal drums later in the same track you can feel the full impact of this sound. This type of internalised soundscape can hermetically seal you off from the world.

The scale of power applied in music sometimes can change your own preconceived notions about what you like. How Much for Your Brother is a screamer. There is a beast shouting at you on it, but after all the teasing of the previous tracks it’s refreshing to just be intimidated rather than creeped out. A minstrel band of Romani violin players accompanies the darkness on your trail. Their lunatic melodies would not be out of place in an asylum.

What’s refreshing about Liberez’s sound is its all-encompassing nature. The noises the record spews forth are so strong that it precludes multi-tasking whilst listening. This is a good thing. Music is an abused art because it’s so adaptable to our surroundings, so it feels right to bring this uncompromising guest into your stereo.

All Tense Now Lax sometimes sounds like a lover whispering sweet nothings into your ear whilst pulling your toenails off with a plyers. Any more of this kind of stuff and we might start getting serious about music again.

1 thought on “A Statement of Intent – Liberez, All Tense Now Lax”