Calling your tour (and new album) “From Now On” is unusual in your eighties, but then very few people are touring a new album at 83. Pet explains (I can call her Pet, can’t I? It seems she’s become a national treasure, property of an era of pop). Anyway, Pet explains that Norma Desmond (main character in Sunset Boulevard) is everything she despises. The film tells the story of a silent movie star clinging to memories of her fame. It was made into a musical that Clark toured for two years and we hear a couple of songs from it. She may not be living in the past but there is a lot of back catalogue to traverse, interspersed with songs from more recent releases, songs she is proud to show off and tell us about. The Sunset Boulevard songs arrive with stories and songs from other musicals, including a couple of clangers from Finian’s Rainbow – the cringeworthy Irish accent is self-mocked and is worth it for the stories about Francis Ford Coppola and George Lucas stumbling from a car and Tommy Steele as a six-foot cockney leprechaun. 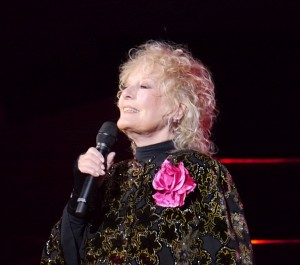 When you reach your eighties, you can’t have the same sort of puff you had in your twenties and the show tonight is a lesson in how to perform with dignity. Petula eschews belting and sustaining notes, she does it all with phrasing, letting the band cover the parts where volume is needed. She also adds in lots of breathing space for stories – she’s covered some ground in her career – and we are entertained with stories about Jimmy Page, Charlie Chaplin, Fred Astaire, Peggy Lee, Tony Hatch and others, often with a sense of not quite believing she was there. But she was, and even wrote a few melodies herself (the one lyric on show, Reflections, suggests music is her strength), with collaborations with such as Charles Aznavour. 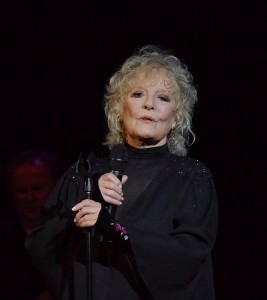 She has tons of sixties material, particularly from her Tony Hatch and Jackie Trent days, enough that, at one point, she throws some away in snippets in a medley. Others, like early openers You & I, Don’t Sleep In The Subway and Who Am I, get the full treatment and awed appreciation from the audience. Leeds Town Hall is a great setting and the spotlight is on Petula, while washes of purple and blue show up the huge pipe organ and Late Victorian slogans of the grand old hall. The four-piece band provides a rich soft rock / MOR backing and the guitarist indulges in some pantomiming as Clark regales us with the story of having Jimmy Page on session for You’re The One. Her arrangements were always big and bouncy and we recognise them tonight. As we recognise Gnarls Berkeley’s Crazy. She makes a good fist of this track from her last album and it’s the sort of thing people like Sinatra did in the sixties, reworking contemporary pop hits. She later takes The Beatles’ Blackbird and jazzes it. Less contemporary covers include Stevie Winwood’s While You See A Chance and a punchy, seventies-styled, Fever. 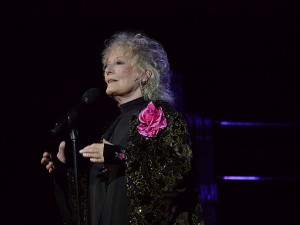 The remarkable thing tonight is the spirit. Pet is a very seasoned performer and polished but she still evinces an excitement at times. Some songs (the country-inflected ones) set her jigging gently and I Know A Place’s clever blues-ish reworking brings on a little jump. She keeps moving about the stage and turns in a two hour performance over two acts. 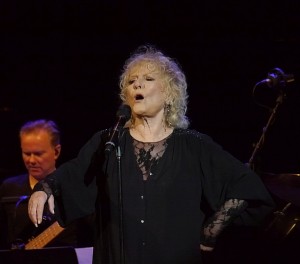 She delivers a couple of lesser songs in French and nonsense like Sailor’s “harbour of my heart” are better that way. I was hoping for some stories of her time as one of France’s biggest ‘Ye-Ye’ girls but we’d need a longer evening for that. The evening moves on and when she reaches I Couldn’t Live Without Your Love she gets sassy and almost carried away; her finger wags, her arms wave and a few decades drop from her. She wraps things up with Downtown (of course) and works it as a call and response, clap-along showtune. Here For You, a much more recent song, brings us to a gentle close and reinforces that, as far as she is concerned, Pet is living in the present as she wisely avoids the artificiality of an encore, sending a happy audience out into the streets of Leeds. Tonight has been a lesson in how to retain your style, please the audience, present new work without displeasing those there for the hits, yet project the decorum of a grande dame of pop. 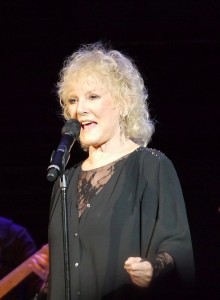 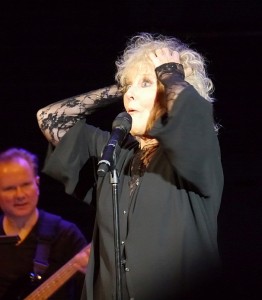 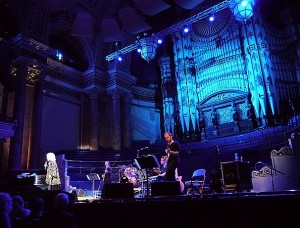 3 thoughts on “Petula Clark – Live at Leeds Town Hall 2016:   How to sustain a career in your eighties”