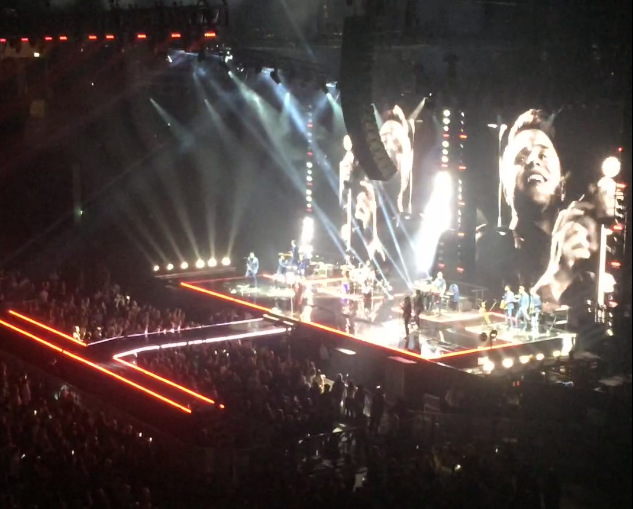 Olly Murs played Glasgow’s SSE Hydro on two successive nights, Friday and Saturday. His support for the Saturday gig was Garry Spence from the Drive Home show on 105-106 Capital FM. The Friday night fans had a better set with George Bowie and his GBX Experience. I know that because my friends went to the Friday show. We were at the Saturday show, and unfortunately were bored with Garry’s set. When Garry shouted 30 minutes to Olly, the crowd screamed.

The crowd were made up mostly of women and female teenagers. Once Garry finished, they started to play music videos on the screens. Every time the Olly Murs poster came up the crowd screamed. The Bruno Mars song Uptown Funk came on and the crowd danced away. Then the cameras went through the crowd like they do at the super bowl to screams, waves, smiles and dance moves. It was awesome, real good fun and way more entertaining and uplifting than the DJ set.

“24:00 hours” came on the screen, which of course was very fitting for Olly with it being the title to his new album. The crowd were cheering the countdown.

The screens went back and Olly shot up through the floor at the front of the stage with his hand up in the air like MJ on his Moonwalker tour. “Glasgow good evening it’s Saturday night! Come on!” The place was filled with screams for his dance moves, for his voice, for him.

Olly sang my favourite song first You Don’t Know Love which I totally connect to as it came out after a break up and the lyrics couldn’t be truer. The stage was pleasing on the eye with lights sectioning off the 11 band members on the floor. Then there was a gangway T design into the VIP standing crowd members and into the first row of seats.

The crowd participation was already at the highest level for song one. Tonight was going to be a good night. At the end there was an explosion on stage with class sparks which gave most of the crowd a fright.

“It’s time to parteeeeeeeeeeeeeey! Come on!” shouted Olly as he moved on to Wrapped up. The lighting everywhere was cerise and so was the pair of knickers that got flung at him. He picked up the knickers and started swirling them above his head. The audience were loving it and singing away.

Of the eleven band members three were in the brass section, there were two female and two male backing singers, a drummer, one on keyboards and two guitarists. Together with Olly they put on a great show.

Olly would pause inbetween songs and the crowd took their turn to scream again.

“Everybody click your fingers! You guys look beautiful tonight! To the front! To the top! Everyone click your fingers now! This ones called Unpredictable.” The lights went white and a video of Olly singing came on with black and white templates round it. The lighting on the floor was blue. When he sang “It drives me crazy” he rubbed his hair and then his crotch, another MJ move! This song was from his new album, it had a great sound to it, cheeky lyrics, which were very catchy. He moved all over, got the crowd waving their arms, approached the primary female backing singer and they crouched down and sang together. Then as the song came to an end he girated his body up the gangway.

“Good evening Glasgow. WOAH! And I thought last night was good and then you guys walked in and just made it ten times better! Well listen thank you so much for coming to my tour ladies and gentlemen. Thank you so much. Thank you for spending your Saturday night with me ladies and gentlemen. I promise I will make it as entertaining as possible. It won’t be quick. It will be long!” The crowd started screaming. Olly was laughing and so was the crowd.

“Anyway can I just eh; someone’s, eh, lost a pair of knickers this evening unfortunately they are my colour. They came from this direction. Are they yours young lady? Thank you so much” and he handed them back. “I think they’re clean? Are they? So listen now I couldn’t think of a better place to be. When I look on the tour dates I was flicking through this was the first date that went on sale and I thought, Saturday night, Glasgow Scotland oooh. Its gonny be a fantastic night! Now listen, honestly from the bottom of my heart I thank you all so much for coming tonight I promise you gonny give you absolutely everything on this stage tonight I promise it will be so much fun. And also I must apologise to you guys cause some of the show you are just gonny see my bum.” This produced screams galore.

Olly then broke into “Grow Up” with orange lighting on the stage and Olly had us all waving our arms again. The crowd put their torch lights on their phones, the place was sparkling. Olly bent down on one knee singing this. Afterwards he joked with the crowd asking if he needed to grow up.

He told us he wasn’t perfect, he was immature, that he had recently become single and that his imperfections were summed up in the next track her played, “Flaws”. He stood in the middle of the gangway, and sang this beautiful slow song. Blue lights were shining and smoke was transgressing up the pathway. The fans had their torches back on, Olly got very emotional, and at the end of the song he was in tears.

He picked up the mood and shouted “RRRRRRGBBA” like a Spaniard. Then the fans responded with “oooh oohhh” chants. Everyone started clapping as hwe went into “Up”. This certainly lifted us up. Olly then grabbed his crotch again, shook bum at the crowd and let them touch it.

He sang “Back Around” and shouted out “Who can I love?” while he opened his jacket. Girls in the room went wild.

Olly went off stage and returned in a new outfit, black with a few red stripes, classy. He asked if it was anyone’s birthday and told us that it was one of this band member’s birthday the next day but that it would be great to celebrate it today. The crowd sang a massive happy birthday. A beautiful cake was bought on stage and Olly asked the band member to “give me a blow”. Everyone laughed.

Olly thanked his fans alot throughout the night, especially for getting his album 24hours to number one. He told us that this was his toughest album yet because it was about his break up. He sang a song from years ago, “Dear Darlin”, which he told us would have been perfect for the new album, getting the lines “Scotland I’ve missed you” and “Glasgow I’ve missed you” into the lyrics.

He then sang Tina Turner’s “What’s Love Got To Do With It?”

Being single, he asked “How many single ladies are there?” In between singing “I Need You Now?” he shouts to one lady “What’s your number?”

He sang the title of the album “24 hours”, which was very subdued on the stage even, although the guitar solo was immense. Fireworks were then released.

At this point Olly then decided to play a number of songs that he traditionally plays back stage with the band to get warmed up. It included “That’s the Way I Like It” by KC and the Sunshine Band, “Never Too Much” by Luther Vandross song, “Everyday People” by Arrested Development, “Vibe” by R Kelly, “Jump” by Kriss Kross and “Can’t Touch This” from MC Hammer. He joked “You can’t touch this ladies” as he went into the crowd to sing, with bouncers in tow to stop crazy fans from rushing too close. Back on stage Olly carried on with Justin Timberlake’s “Cant Stop The Feeling”. Then all of a sudden there was a huge explosion, which prompted screams, and which produced a Fireworks display that you could feel the heat from.

Olly then told his fans they had made him who he was today. He asked “Ladies you want more?” The ladies screamed the place down. “Fellas you want some?” The place went quiet. He played “Dance With Me Tonight”.

Olly left the stage as he entered, through the secret panel in the floor. He came back on for an encore and blew the fans away with “Kiss Me”.

All in all it was an entertaining night. He did two nights in Glasgow and both were packed. Who would have thought an audition on X Factor 8 years ago would have him filling arenas out? He’s not the best Singer, he often admits that. Some of the performances near the end felt a bit ‘shouty’ but I still reckon he’s better than Robbie Williams. The good thing is that if he ever did lose his voice I’m sure a career in Chippendales wouldn’t go amiss. I wish he hadn’t sang so many other artist’s songs when he has a substantial catalogue of his own. It made me wonder if he doesn’t have faith that his own music could keep the attention of a crowd for a full performance.