With a new album to promote, it’s no surprise to find half a dozen songs from it in tonight’s set. And they sound better than on the album, thanks to being stripped back to keyboard and vocals. Peter Wilson, the Duke, may be travelling solo but he’s not travelling light – bringing with him a piano, a harmonium, a synth and a drum. Sat at a keyboard is his natural state and his theatrical songs benefit from the emphasis on his Ulster voice as his left hand pounds the keys.

The audience is rapt but then a Duke Special audience is a bit, well, er, special. In a very unusual move for The Brudenell, they are sat in rows and heaven help anyone who talks. They are even queuing in single file for the bar. Tonight is a cross between worship and the attentiveness of a theatre audience; even requests for songs are delivered politely and only when the Duke asks for requests. 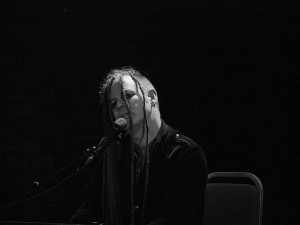 In A Dive is delivered nice and plain, emphasising the lyrics, while Stephen Merritt’s song, Andrew In Drag is sweet and shows a knack for a quality cover. In fact the highlight of the evening for me is a quartet of Ivor Cutler songs, delivered at the harmonium, full of weirdness and love that Peter’s gentle attitude burnishes. His Brecht / Weill cover, Moon Of Alabama, is strong too, with his left hand threatening to snap the piano. He loves a challenge, does Duke Special, and picks up projects that have him writing to set themes, creating songs different enough to almost sound like covers. They are generally charming and his Under The Dark Cloth project provides songs like Rita Dia Costa and Hand Of Man, full of story and characters. Oldies like Last Night I Nearly Died go down well, this one being sung hymn-like by the audience.

Many of these songs would fit straight into a musical and some, like I Could Go To London could fit the music hall for old-fashioned cross-generational entertainment. Tweed Coats (with accompanying tape recording of the street sounds of Eastbourne) and Domino, two of the simpler arrangements on the album go down very well, with the latter reaching an anthemic quality. Request time sees Wanda, from his set of songs about silent movies, get an outing. A fan favourite, I suspect this was written solely so Peter could rhyme lazy day trips with aviatrix. Oldie, Slip Of A Girl, slips down nicely and newbie, Statues, is as lovely as anything he has written before. Choosing to close with Our Love Goes Deeper Than This, making it sound as simple as a lullaby, we are charmed out the door with a meta-song about the mechanics of saying good night. 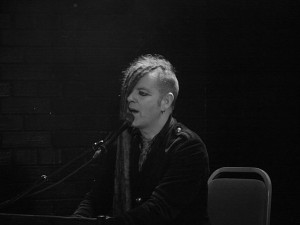 With a catalogue that isn’t even half used after a hundred minute set, reverent fans like this, an adept marketing approach and frequent awards and commissions, it still surprises me that Duke Special is not dealing with the dilemma of whether to play mega-venues. Perhaps I should just count my blessings. Shhh, don’t tell anyone how good a Duke Special live show is……..