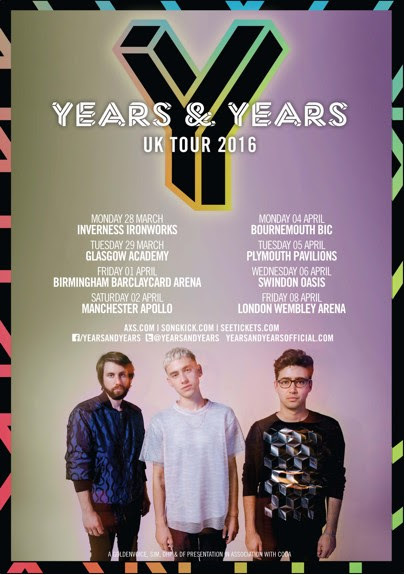 Following a sold out pre-album UK tour earlier this year, chart-toppers Years & Years are currently in the midst of their (also sold out) post-album UK tour. Due to an overwhelming and ever-increasing demand, they have just announced that they will return in Spring 2016 to play a string of headline shows in their biggest venues to date.

Years & Years are 2015’s biggest break-out pop act, having won BBC’s prestigious Sound of 2015 poll and had their single King debut at the top of the charts, go platinum, and firmly establish itself as the song of the summer. Follow-up single Shine is a more emotionally-charged affair about the nervous yet hope-filled stages of a newly-formed relationship, but its universal lyrics, slick production and anthemic chorus propelled it right into the top 10 of the charts once again. Their highly anticipated album Communion only served to solidify their place in UK pop history, debuting at Number 1 and outselling the rest of the top 5 combined in its first week of release. It has now sold over 650,000 copies worldwide and taken up permanent residence in the UK top 20 – making it the fastest selling debut in 2015 from a UK signed band. Current single and piano-led ballad Eyes Shut showcases the true diversity of their sound with its rousing string accompaniment and soulful vocals.

Years & Years are renowned for their live shows which combine huge house-influenced dance tracks like Desire with heart-breakingly emotive piano ballads like Memo, fronted by charismatic and energetic lead singer Olly Alexander, synth-player/drummer/bass-player Mikey Goldsworthy and synth-player/beat-maker Emre Turkmen. Their 2016 dates are already generating huge excitement so make sure you get your ticket while you still can. Dates are listed below and tickets go on sale from this Friday 16th October. Visit www.yearsandyearsofficial.com and www.songkick.com for more details.