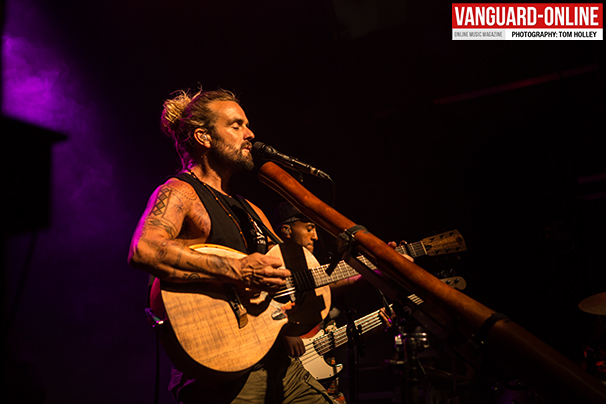 Coming off the back of a stretch of Australian shows, Manchester was the third of five dates in the UK/Ireland to kick off a tour taking in Europe and then North America. Although not comfortable with audiences and people, he has “always been a live player”, lived a busy touring schedule as showcasing a live experience has always been a “big thing” to him, calling it a ceremonial gathering, a church with acceptance of one people; “to bring spirit, uplift and let go; that’s why we do it”. And Thursday night was no different, as the lights went out, his Tim Kill guitar echoed the opening bars to Honeymoon Bay with great reception. Backed by a talented trio of musicians spanning three separate continents; Aussie Ian Peres (Wolfmother) on Keys, Fijian Lisa Purmodh on Drums, and Ethiopian Yosa Haile on Bass; all equally switching roles with different percussive instruments throughout the night. 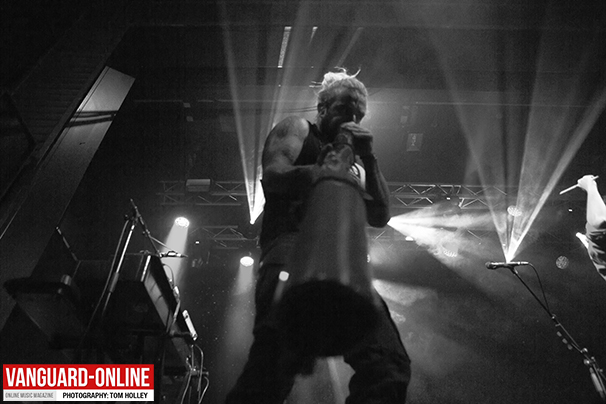 Xavier too, renowned stepping bare foot, and playing an eclectic array of instruments including Didgeridoo, Acoustic/Electric Guitar, Weissenborn/Lap Steel, Stomp Box, Harmonica, Organ, and Drums/Percussion to name; something he adapted to when younger as he couldn’t settle on one instrument but instead wrote basslines on guitar and synchronously picking lower strings; and layering these to his like minded approach and talent for Stomp boxing or other percussion rhythms for example. Fast forward and back to the show, energetically hopping from one thing to another; and often simultaneously like on Rusty Hammer, Come Let Go, and Lioness Eye to name a few; the crowd were engaged. The way he can captivate and hold an audience is miraculous; his deep lyrical content, emotional musical vibrations are really felt genuine; someone who’s love for the environment and the roots of humanity is powerful both in his music, stage presence and his connection with the audience throughout; speaking about social change, climate, diversity, unity, and appreciating life, surrounding yourself with the people you love; the most touching message as I gathered my thoughts walking away from the show was the “most powerful medicine of all, love”. I think the better part of his ninth studio release focuses upon all these messages; which reflected much of the show with seven of Storm Boy’s tracks appearing. 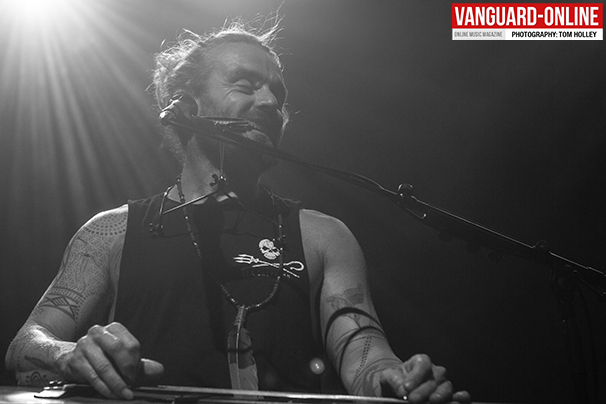 Rudd’s affection and devotion toward his live shows is obvious; which is often depicted through his studio efforts too, where he captured 2008’s Darker Shades of Blue in perfect essence, the organic raw feedback he grasped swept throughout; such a deep influx of sounds which you wouldn’t think was tackled by two musicians; which is further assertiveness of his talent. 2015’s Nanna on the other hand brought together a world lit group of musicians together from Australia, Indigenous Australia, South Africa, Samoa, Germany and Papua New Guinea forming The United Nations which Rudd explained is a symbolic message that all people of the world can come together. 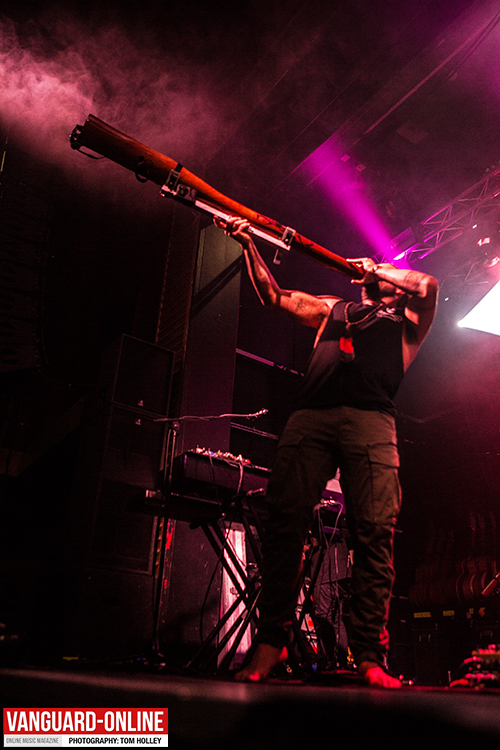 Xavier brought such a great picket of songs from his 16-year career so far, with his growing palette of sounds had the crowd on edge; swinging from the reggae undercoats to a great rootsy and world sound. His power and slow building on the Didg was depicted beautifully on The Mother, a circular breathing technique he learnt on a vacuum cleaner hose at a younger age. Often throughout, switching between his Blues harp, Weissenborn, Stomp Box and Vocals seemed effortless; almost a feeling of replaying a throwback to his busking days. Spirit Bird closed out the show; which is a song in prayer for the hope of the Indigenous peoples; and with a Wurundjeri heritage, he his accepting and true of his beliefs, as shone through the emotion he drives into these shows; further reclamation of his affection for live performance. His band carried great consistency, a very tight knit group who loved every moment as much as the crowd did, and they fed off that energy; waving flags of the Indigenous Australia, Fiji and Ethiopia as the set progressed. 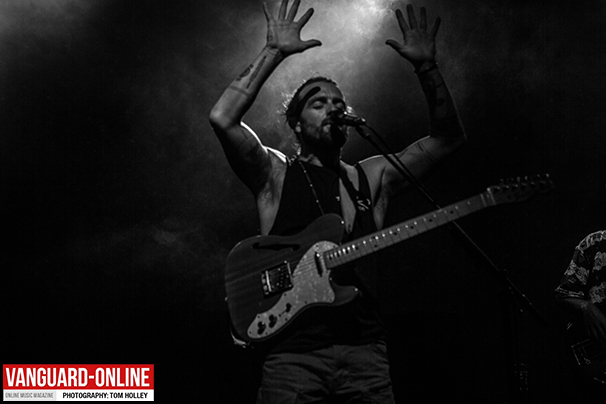 It was an amazing experience to be part of this close-up, you can feel the positive vibes and energy resonated throughout; the bellowing of loyal fans singing and dancing passionately with the band from start to finish. Lioness Eye was a highlight with the Yidaki and a backlit Drum/Percussion kit; switching effortlessly between vocals and his two Didgs was truly amazing; and sounded like a studio cloned rendition; bearing in mind this is a near ten-minute song. Come People was groovy and reaped a great connection with the audience, a great ebb and flow with singalongs; Walk Away is an instant love affair and the crowd engage and feel what pours from the stage as a genuine message. Just wonderful. 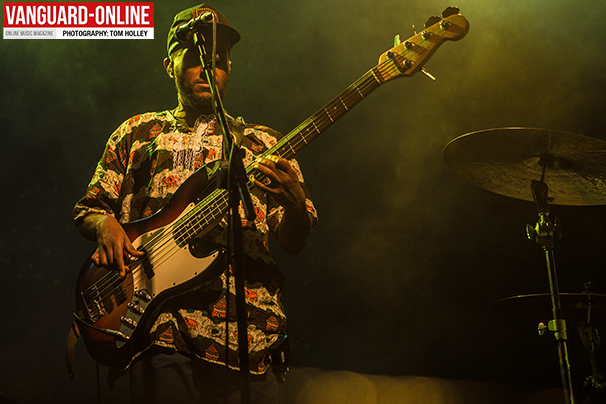 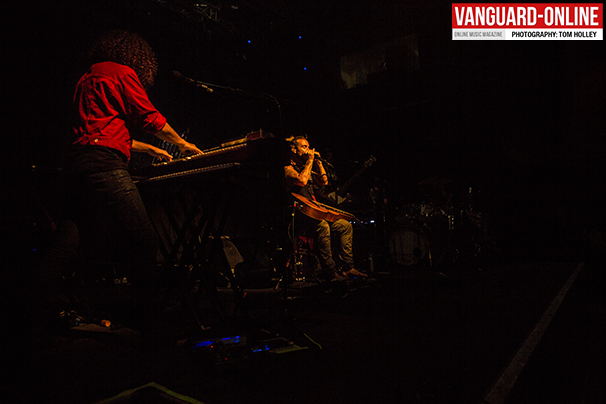 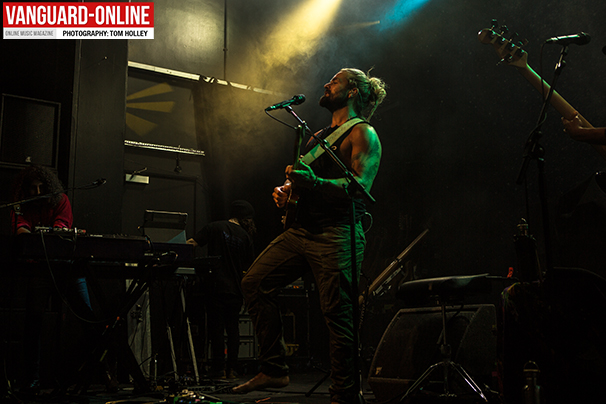 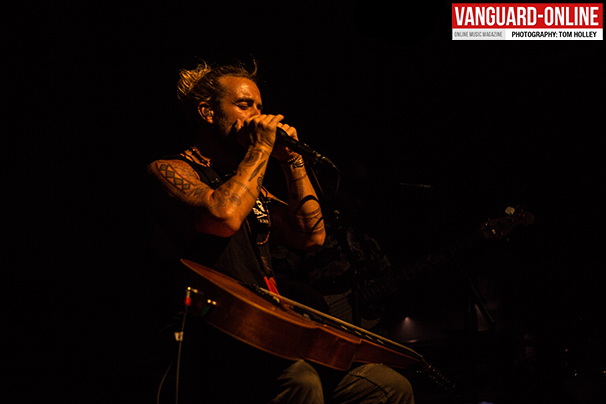 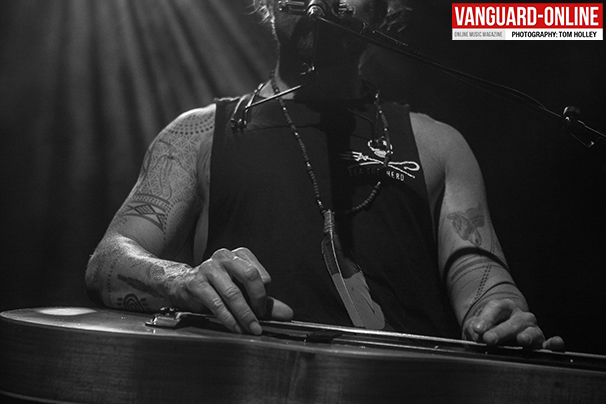 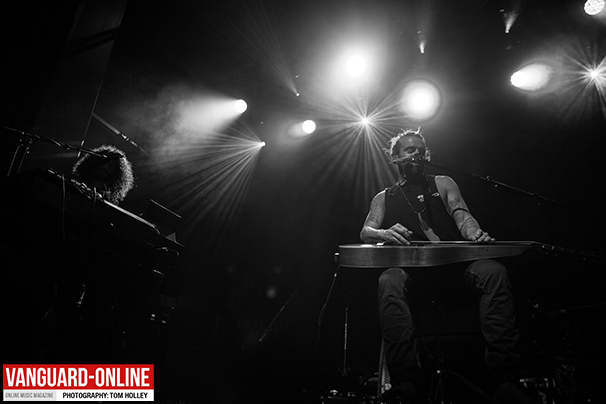 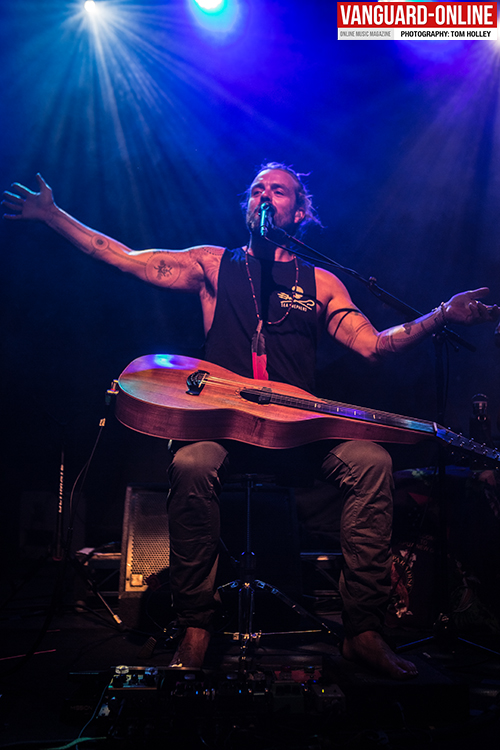 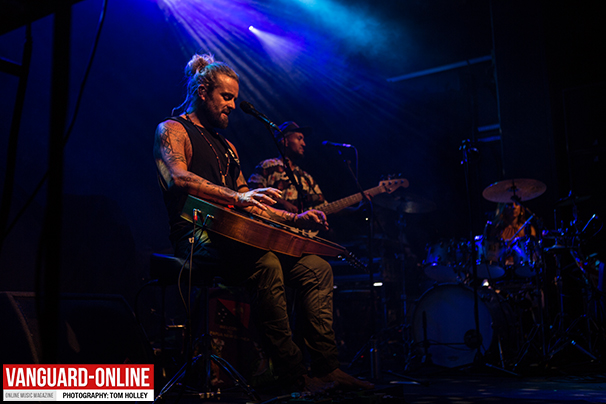