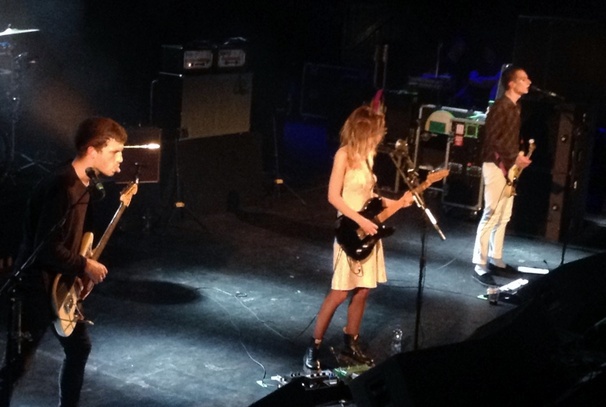 Outside Dublin’s historic Olympia Theatre the streets are lined with Harrington and Doc Marten clad fans, sporting Wolf Alice’s signature under-eye glitter. Doors aren’t due to open for hours, but Wolf Alice has fast become one of the most talked about bands to come out of the UK in recent years, and with this being their first headline show in Ireland the air of anticipation is palpable. Indeed the band themselves have long been looking forward to it, the drummer disclosing to me that playing a headline show at The Olympia, selling it out, and having it be really good, has been on their personal bucket list since playing a support set here back in 2014.

Two down, one to go.

Later that evening the venue itself fills with notable speed, fans clamouring to the front of the pit. Guitarist Joff Oddie casually walks onto a dimly lit stage, swinging his guitar confidently above his head as he is joined by bassist Theo, drummer Joel, and lead singer/guitarist Ellie, to applause already at near deafening levels. They set the scene with a textured and atmospheric guitar intro before breaking into fan favourite You’re a Germ. The distorted guitars and dynamic build elicit an immediate response from the crowd, the anthemic pre-chorus shouted passionately by band members and audience members alike. Lead singer Ellie commands the stage, closing the track on its signature deranged laughter.

In contrast, latest single Freazy is a more summery, dream-like affair. Lyrically referencing their album title and band name, live it has a distinctive groove that results in near synchronized dancing throughout the crowd. Early single Bros is a nostalgic look at the bond of childhood friendship, and the serenity of Ellie’s vocal serves it well. Drummer Joel’s backing vocals somehow blend seamlessly, managing to highlight the ethereal nature of the track.

So as not to risk the audience getting too comfortable, Wolf Alice break out propulsive album track Lisbon. “Feel like running, feel like crack, feel like going out and smashing windows, I’m smashing windows” Ellie confidently proclaims as Joel attacks the drums with impressive ferocity and impeccable timing, as he does for the entire night. This gives way to Wolf Alice’s first direct engagement with the audience in terms of conversation and simply consists of a humble thank you. Impressively Wolf Alice is a band that need not utter a word to captivate their entire audience, as everything about their onstage performance does them the favour. One fan, however, does feel compelled to declare his love for Ellie, and she politely thanks him, laughing while absently tuning her guitar.

Wolf Alice play their debut album My Love is Cool in it’s entirely, but intersperse the set with older EP tracks like the dynamic 90 Mile Beach and 90s-infused Storms which truly come to life in a live setting. Theo’s commanding bass propels Storms forward as Ellie demonstrates the true diversity of her vocal, managing to cut through the thunderous background of distorted grungy guitars on its chorus. The expertly crafted refrain combined with Ellie’s delivery transforms it into a battle cry of sorts, with the audience being compelled to yell alongside her as the song draws to its rip-roaring conclusion.

My Love is Cool has been widely praised for its expansive sound, demonstrating both the bands versatility and originality. This is amplified by their live show, their performance of Swallowtail being a prime example. Ellie momentarily leaves centre stage allowing drummer Joel to take over on lead vocals for this melancholy ballad, his glittering gold drum kit and flowing white shirt illuminated by a single spotlight.  His vocals are notably impressive; especially considering it isn’t his primary role in the band. Ellie reclaims her space centre stage to contribute to backing vocals this time, and in the bands signature dynamic style, the song erupts into an explosion of fuzzy guitar and mosh pits for its final minute. Theo jumps off stage – at protests from security – and gestures dramatically in (successful) attempts to energize the crowd even further.

Fluffy, a memorable track from the bands earliest shows has lost none of its vigour. A polished but uncompromising marriage of pop and punk, Ellie’s guttural screams are met with overwhelming enthusiasm by the crowd. Later the enchanting album opener Turn to Dust serves as the band’s first encore track, offering some respite and a chance to fully appreciate the pure tones of Ellie’s vocal. The most emotive performance of the night, however, comes in the form of Blush EP title track, a mellow, textured build and haunting delivery over twinkling guitars reminiscent of the xx; “curse the things that made me sad for so long, it hurts to think that they could still go on. I’m happy now. Are you happy now?”

Wolf Alice close their set on fan favourite Giant Peach, Ellie and Theo doing their signature synchronized two-step dance in time with its iconic intro. The song’s heavy guitar riffs sound as though they could be more comfortably at home in a stadium much larger than this theatre’s <2000 capacity. Based on tonight’s performance alone it’s unlikely they’ll be playing venues this intimate for much longer. The crowd descends into frenzy, revelling in the track’s raucous guitar-driven outro.

The band seem humbled by the rapturous cheers, simply stating “we love you” before making their final exit.

The love has quite evidently been mutual. 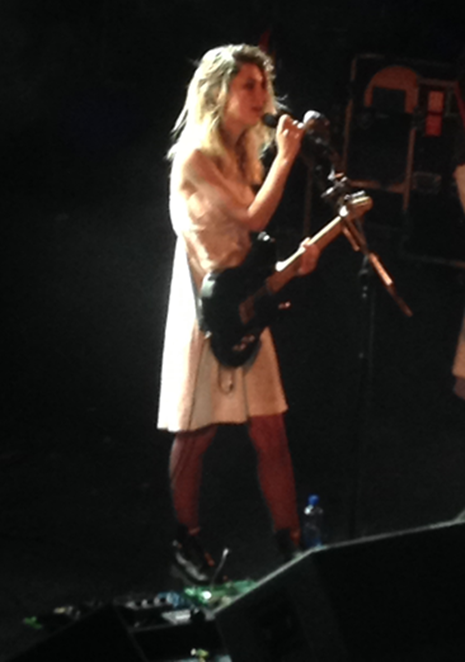 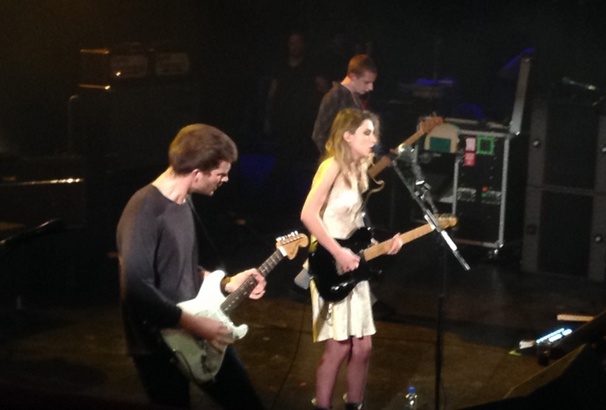