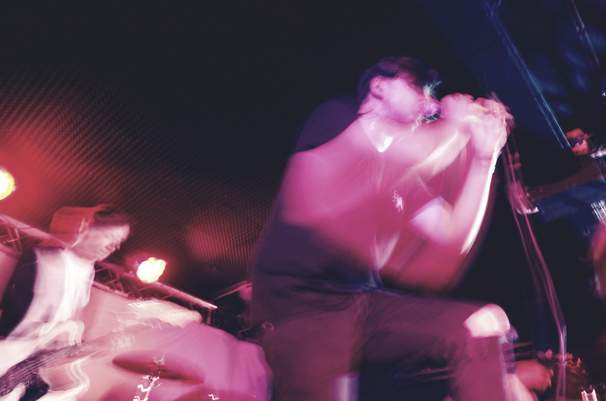 This past year has been a big one for Woes; touring with Welsh heavyweights Neck Deep, releasing their first EP and having their song played on Radio 1’s Rock Show are just a few highlights. Already this year they have signed to heavy music label UNFD and released a new single, ‘Real World’, with a Lewis Cater directed video soon to come. Things are looking to be on the upward slope for this young band from Edinburgh.

The tour kicks off at Exchange in Bristol. The show has a very serene start; support act Lizzy Farrall eases the crowd in with her haunting vocals and soothing acoustic set, she interacts warmly with the room sending positive vibes to the following acts.

Then we have Woes, whose drums crash through the mellow atmosphere left by Farrell as the catchy riff of ‘Tight AF’ shakes the room up. Frontman David Jess (known as DJ) really gives it his all as he jumps and highkicks his way through the band’s array of pop punk bangers. His emotive vocals are complemented by bassist and vocalist Sean Duddy’s slightly lower tones as they both jar over the instrumentals. Although their Scottish accents are practically undetectable they also don’t appear to conform to the nasally, Americanised sound that has been such a stereotype of pop punk for so many years. They are bringing their own sound in a way that a lot of their peers are not.

As the audience is getting more geared up they treat them to their new crowd pleaser, replacing Smash Mouth’s ‘All Star’ with the equally memetastic Papa Roach’s ‘Last Resort’. Although a nu metal cover may have been done before it’s all good fun, they don’t take themselves too seriously.

The lyrically anguished ‘Be Alone’ follows, the upbeat drumming and infectious hooks combined with some darker sentiments is what Woes does best. Drummer Ryan Neish, sporting a pair of running shorts, definitely gives himself a workout; he smashes his way through each song with show-stealing speed, rhythm and precision.  They showcase their new single ‘Real World’ and round off with ‘Winter Sun’.

They definitely get the crowd charged for Seaway, the North American five-piece swim effortlessly through their varied repertoire of fun and groovy slices of pop punk. Their lead singer Ryan Locke’s self-assured swagger contrasts with DJ’s earnest and eager performance.

It was a valiant effort from Woes, throughout the set the vocalists interacted enthusiastically with the crowd with their youthful bants and exuberance. Although they may not have had the audience raging all the way through they have a charming self-deprecating sense of humour that goes down well and their genuine excitement and appreciation shone through in their performance. With their catchy hooks and relatable lyrics they are clearly very adept musicians with a great work ethic, they have all the ingredients they need to continue to rise through the scene and beyond.

See our interview with the band here.