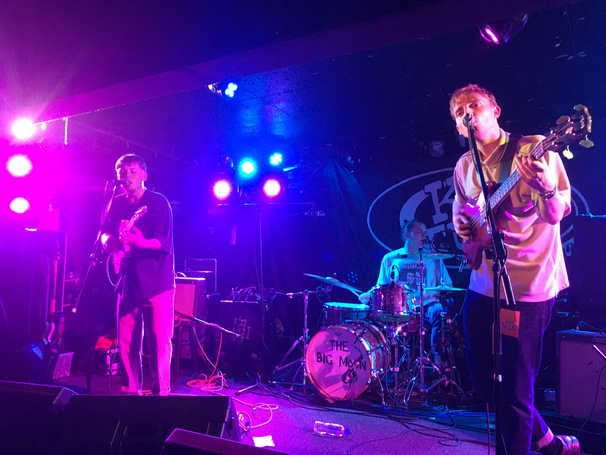 Trudy And The Romance supported The Big Moon at King Tuts Wah Wah Hut in Glasgow on the 29th of October. They didn’t warm up they crowd they had them smokin hot. This band are right up my street and after watching them here I would love to see them at their own headline show.

Theses guys do wonky pop at it’s best. They teamed up with Bill Ryder Jones and recently got nominated for a GIT award.

They’ve also been called Trudy Sings The Blues and also just Trudy. They’ve worked Sheffield and Leeds and are now in Liverpool.

Oliver Taylor is lead singer, Brad Mullins is drummer and Lewis Rollinson is on bass. I saw Brad outside before the show very much at ease. He was such a lovely guy to talk to and he was looking forward to their performance. He didn’t have a huge amount of time to talk mind, he dismissed himself to go and do a soundcheck.

Trudy And The Romance came on stage to bottles of water and Carlsbergs. Brad had a modern lovers t-shirt on. Oliver had an oversized dark Fila t-shirt and light chino style trousers with turn ups and black Nike trainers. He looked very geeky cool. Lewis was wearing a light polo top with jeans again with turn ups.

The first song was Doghouse and right away I was captivated with Oliver’s movement and playing style. He was like a cross between Elvis and David Byrne from Talking Heads, the way he was showcasing himself.

Oliver moved about that much on the stage by the second song, Baby I’m Blue, the sweat was dripping off him. Oliver’s big ass cute smiles were glowing with the crowds reaction to the music. An audience member shouted ‘Here we fuckin go!’. Brad signalled over to the sound booth. Before singing Oliver asked if we could hear the drummer because he couldn’t and by the looks of it neither could Brad. “We need more Brad man. We are Trudy And The Romance. Anyway it’s nice too meet you”. In this song with his mental jerky moves he could still flow the music to perfection with his guitar. Lewis was chilled and zoned out to the tune, he was as smooth as could be, while Brad gave it his all on the drums, wiping the sweat from his brow. 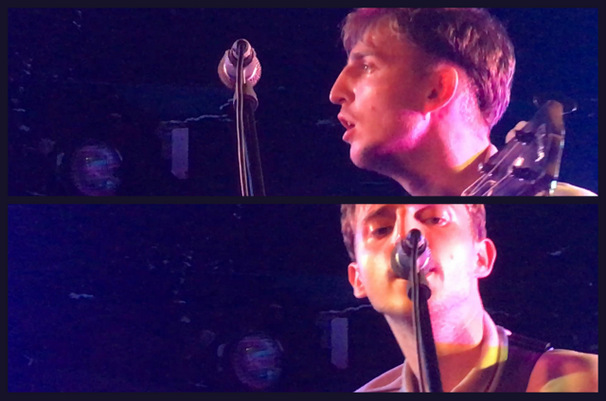 Oliver asked again for Brads vocal to be put up. Whilst waiting he rolled out a Fleetwood Mac Riff and then went into Albatross. Lewis and Brad joined in. Lewis nodded back and forth then moved his bass up and down not even trying to compete with Oliver’s madness and energy on stage.  After this Oliver jumped right into their next song All Behave.

With Brad’s mic still not working and Lewis having two mics, Oliver took one of Lewis’s. Oliver laughed and said “A bit of DIY. Am I right am I right?” Brad shouted heeeey into the mic. Everyone cheered. Brad shouted yeeeeaaahh! Then woah. A crowd member shouted “YES BRAD MA SON!”

The stopping and starting of guitars these boys did was amazing and worked so well with their style. It really gave a great atmosphere to King Tuts. They played All My Love and as good as the other two boys were holy cow we really did need Brads vocals. He gave the songs another curve ball and a real edge. His voice was high in parts and then nice and deep for other sections. Oliver had a solo and took it away with his magically crazy moves and not a mistake in his guitar. How did he do that? I was in awe. I loved it, I’m crazy and I adore people who do crazy well.

Brad shouted “Is this other mic turned on? As I don’t think I’m getting anything through it”. Oliver shouted “Give us something man!” and started Missing Her. It started slow and romantic then moved into a rocky blues vibe. Oliver’s voice was as crazy and wild as his dance moves.

“We wanna thank The Big Moon for taking us away.….from our bedrooms!” Next up was Barry’s Gone, a new song with a slight 50’s rock n roll feel to it. 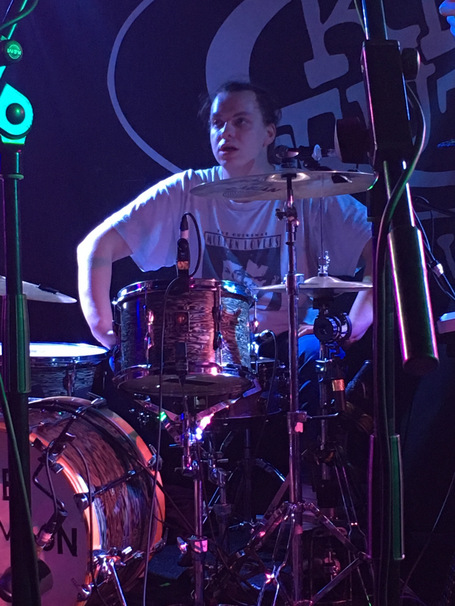 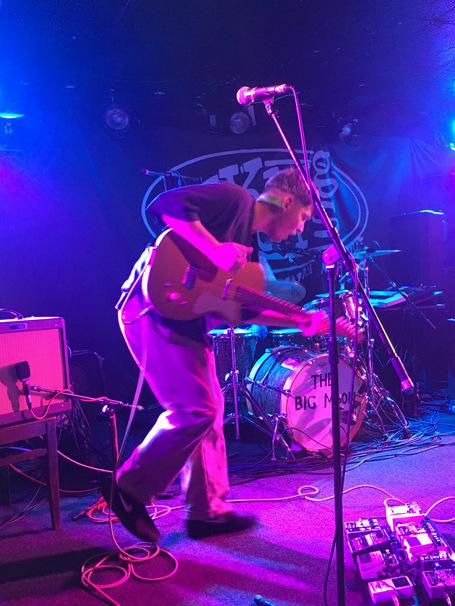 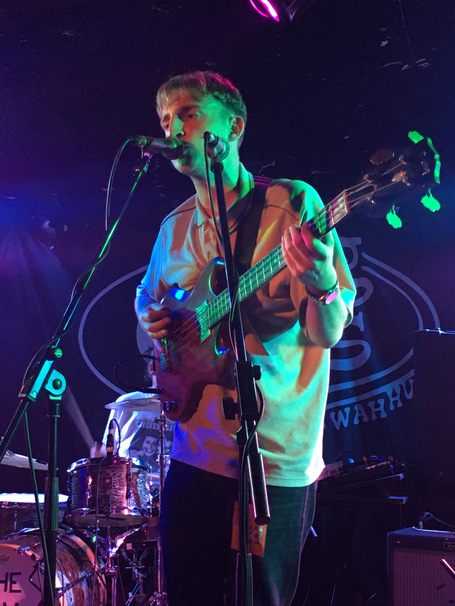 Oliver told us yet again that they were Trudy And The Romance and Brad added “You are the crowd!” Brilliant just brilliant, great humour and stage presence with this band. Lots of laughter all round. Nothing fazed them not even Brad’s first mic not working. They dealt with it really well and carried on regardless. Brilliant boys. Next Melanie. Oliver smiled “you ready lads?” Brad puts in a voice “Yeah man”. So wickedly funny. Oliver says “Are you lot ready?” They play and when Oliver sings out a few howls at the start he shakes his vocal box on his throat at the same time to make it come out wavering.

Oliver told us “We got a couple more, this one’s a big fat love ballad for all you romantics”. Another great tune, a wacky pop and blues mixture called That’s Not Me. At the end Oliver says “You’ve been very kind. All throughout the show whenever he drinks out his water bottle he just lets it drop down. Brad obviously isn’t able to do this with his bottles of beer.”

“We are gonny be at the merchant stand if you wanna come for a chat……or yeah…buy a t-shirt” says Oliver (of which they had four different designs). A crowd member shouted “FUCKIN YES!” Oliver continued “This one is called Sandman. It rocks really hard man”.

These guys had it all: polite, insane, smiley, talented and wacky. I wanna follow them everywhere. I cannot believe how on point they all were, they were made for each other. The Big Moon had an easy entrance as their fans were in a fantastic mood after seeing Trudy and the Romance.

Trudy and the Romance supported the Big Moon at Glasgow’s King Tuts Wah-Wah Hut, on the 29th October 2016 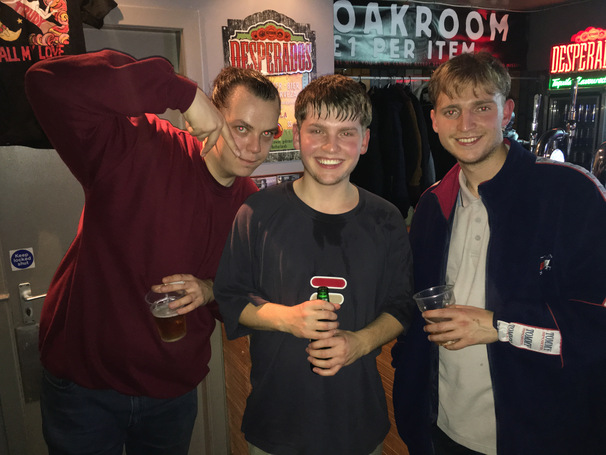 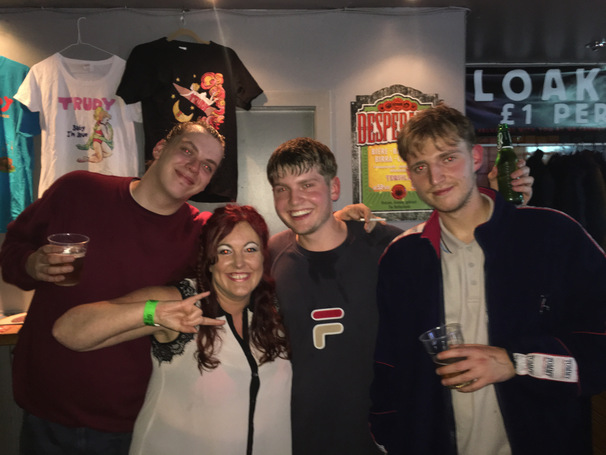 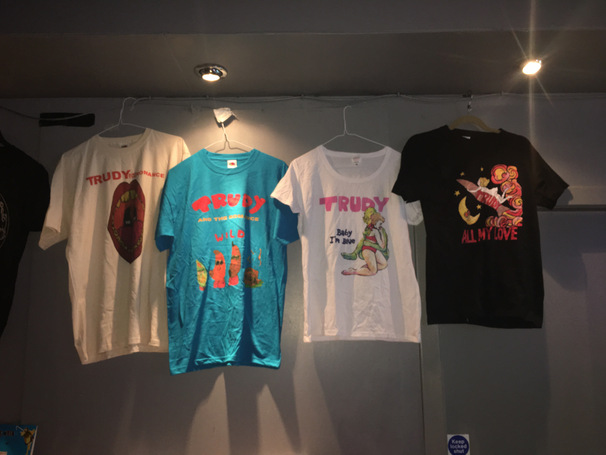 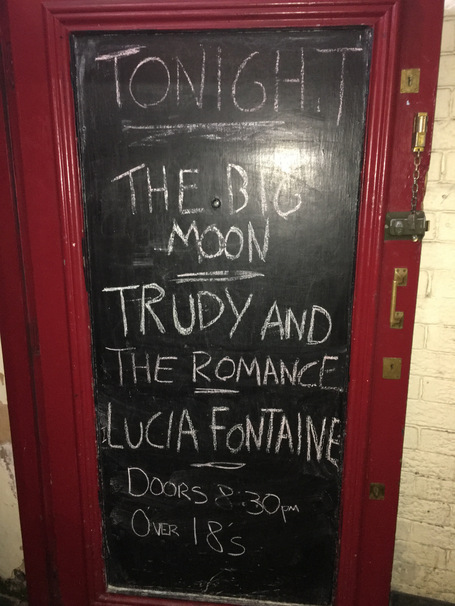