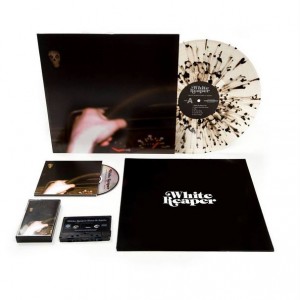 What makes a summer? Many would say the experiences and who you share them with. But what do you remember about a summer? For me, one of the biggest thing is the sound track. In 2013 it was Daft Punk, last year Jack White, and whilst White Reaper may not have the name recognition of these artists, White Reaper Does It Again will surely grace many a barbeque and beach party in 2015.

The Kentucky four piece start hard and don’t stop, the first track, Make Me Wanna Die is lo-fi, guitars blast and pump, drums get the heart racing. The track starts off sounding like it could have come from their 2014 self-titled EP, as does the 2nd number, I Don’t Think She Cares, but something new has been added, a keyboard player (Ryan Hater). His sound is something akin to the score of the smash hit horror, It Follows, an ominous circus synth.

The other members of the band are Tony Esposito on lead guitar/vocals and brothers Nick (drums) and Sam (Bass) Wilkerson. Their playing is tight, much tighter than on the EP, touring material extensively has done the band a service.

Next up is Pills, a song title that screams for anti-establishment cred. Esposito sings about time, and his desire to both have more of it and to move through it. 80’s power guitar marks out the track, like a fond friend you haven’t spoken to in a long time, it’s affirming to hear from it again, especially as it’s expressed so well here. This track and the next one, Last 4th of July, are reminiscent of fellow American rockers Surfer Blood, but White Reaper play quicker with lyrics that are unfortunately much harder to make out.

The album’s 6th track Alone Tonight is akin to a lo-fi version of a Libertines tune, all gumption and guile, but when Esposito implores us to believe that he wants to be alone tonight, he doesn’t do a great job of it, the vibe is too up beat to believe that he needs anything. This track, like many on the album, could have drifted was it not for Esposito’s technically outstanding guitar playing.

Candy and Sheila are next to stomp their way through your speaker’s, like all tracks on the album these don’t yield, the two tunes are vital to the summer vibe the band are trying to create on the LP. These songs have an almost Fratellis qualities to them, due to the heart on their sleeve nature and rabble rousing tone. Both songs also fulfil the rock/pop requirement of naming songs after women.

Friday the 13th has a horror air to it, but if you are going to tell a spooky tale, lo- fi fuzzy lyrics are probably not the best at getting tingles up and down the spine of your listener. Thankfully the drums (which have been immense throughout the record) keep the concept alive. Whatever it’s about, it’s pulsating. The circus synth is there throughout too, how effective it is is debatable though.

The next two tracks, Wolf Trap Hotel & Don’t You Think I Know, breaks the bands sound into its components parts; the former is punk (the intro is straight Sex Pistols) and the later lo-fi (think Times New Viking circa 2008) both tracks work because White Reaper is a versatile outfit.

The album closes with one last right hook to the jaw, BTK (note: songs names after women good, songs named after serial killers, not so good). It’s all power and speaker splitting distortion, and you can nearly make out the lyrics too.

You’re knocked for six after listening to White Reaper Does It Again, so it’s probably best to have a shot, call some mates, and bang the record on again, what else are you going to do on a hot summer’s day?