Weirds are a very intense band and draw the attention of the audience, even when they’re on support. Tonight they were supporting the very different Spring King but still won rapt attention. I heard them in another support slot a few months ago and, in that time, they’ve focussed tighter and appear to all be riding parallel coiled springs of tenseness. Leading the tenseness is Aidan Razzall, all inchoate rage at the keyboard or on guitar, his vocals more sound than meaning but he’s just one member; the excellent bass sound emanates from a twisting and bending shirtless dervish, thrown into body patterns by the beat he’s making. Alongside is a mass of hair, under which is a guitar and rack of effects pedals. As the hair thrashes, the guitar is tortured and, early on, drags the player into the crowd for a circle pit of one – much to the crowd’s delight. The drum sound was very good tonight and propelled the three front-men in their mission to let loose. 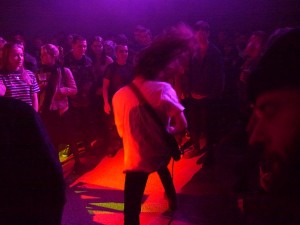 A band playing heavy pulsing, hard-riffing rock with prog tendencies, they leave crowds wanting more by dint of a thirty-minute blast of a set. They tell us they’ve not come far, just from near Burley’s Co-op down the road, where they get the sandwiches that supply all that energy. It’s not long before that energy is on show again, with the vocalist off the stage and running through the audience shouting and ranting as feedback rises from the stage.

This is a band that is growing fast and are a name to watch in Leeds.