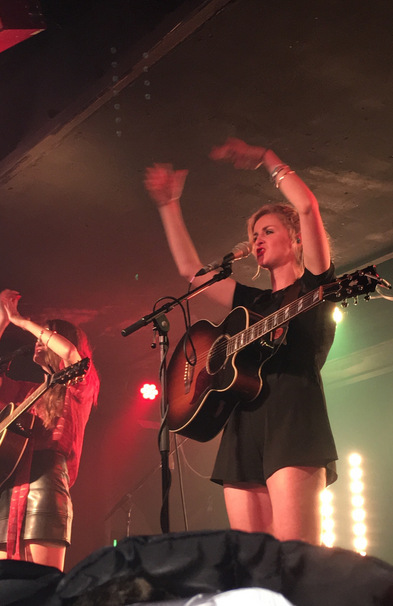 Ward Thomas’ genre is country but let me tell you they ain’t no regular country. These girls are very modern with a British twist. Both 22 and twin sisters, Catherine and Lizzy Ward Thomas are from Hampshire. Their musical influences are Fleetwood Mac, Katie Tunstall and The Beatles. I find their music similar to the Dixie Chicks, Lady Antebellum and a splash of Tina Turner on the fast paced tunes.

Their debut album From Where We Stand was released on 20th July 2014. It was number 1 in the country chart and got to number 7 in the U.K. Indie chart. It won U.K. Album of the year at the British Country Music Awards. Their second album Cartwheels was released this year. It reached number 1 in the U.K. Albums chart making Ward Thomas the first U.K. Country act to top the charts, and made them the most successful UK country act. Their songs are personal, being about them or what’s happened to their friends.

First song Good On You is from the new album Cartwheels. The crowd are mesmerised, in awe of their voices. Both girls sing, only Catherine plays guitar. Catherine sings a lot of the time with her eyes closed, she really feels the story she is singing about. She wears natural coloured lippy, a short brown leather skirt and a rusty coloured blouse. She’s very sophisticated and sexy. Lizzy takes a different approach when singing and really looks into her fans eyes with glowing smiles. She captures their souls. She’s wearing bright red lipstick with a black short jumpsuit. Her glittery socks give her a rocky edge but she’s still hot. She has copious amount of bracelets on her left arm. The two girls always give each other the kind of eye contact you’d expect twins to make.

Where Is The Sky is sung next. Catherine places her guitar down. Catherine starts the song and when Lizzy joins in, their harmonies are sweeter than song birds. This song is stripped back to show off their beautiful tones. Their voices are complimentary. Lizzy they nickname the trumpet voice and Catherine the French horn.

Inbetween songs the girls are thankful. Catherine picks up her guitar again for the upbeat Boomerang. The crowd dance and smile.

Both girls pick up their guitars and play the catchy Dirt And Gold. The place is alive with full crowd participation.

Another stripped back song Material starts with an acapella. The room falls silent to the slower beats of Almost Easy. The Good And The Right is dedicated to Terry Wogan, for giving them their first ever radio airplay. Next comes Guilty Flowers the first song they wrote, it moves between slow moments and faster beats.

After applause Catherine explains to the crowd “So we wrote this next song a long long time ago. And it’s really weird to think that, now, we’ve released an album called Cartwheels, which is the song that started everything. We sorta found it in a moment on the set in the last tour and we knew where we wanted to go and it was at that moment we decided to make Cartwheels. And we are gonny sing Cartwheels for you.” The guitars are put down for this one. What a beautiful song it is, a very sad song about someone trying to rekindle a relationship that’s over.

Catherine asks “How you all doing Glasgow you still all ok?”  Lizzy responds “You’re not too hot? No you’re fine”. Catherine comes back with, “Smells a little bit like a laminator in here. I don’t know if anyone else it getting that?” Lizzy looks quizzical, “A LAMINATOR? ” Catherine says “Yeah I’m smelling laminator”. I agree with her as I had smelt that before they had come on stage. Catherine continues, “Well you know smells trigger memories don’t they? I don’t actually have any memories of laminators” Lizzy is like “OK”. Everyone’s laughing. These girls makes you feel so relaxed.

Then the women congratulate Glasgow for being their loudest crowd and say, “You can do us proud once again for singing along to Push For The Stride.” With their guitars knees bouncing and kicking up their heels to their backs they step up the pace.

Following this Lizzy announces that something special is about to happen. Catherine asks “Is there a Lauren in the room? You need to scream really loud… Robert do you have something you have to say to Lauren? Do we have lights in the house?” It’s a marriage proposal, a crowd gathers around and Lauren waves her hands in the air. Lizzy shouts “Congratulations!”, everyone cheers and, well, I was impressed, that’s the first time I’ve seen that at a concert. Catherine says “We are gonny do a song for you guys now. I have to say you have trumped every other gig we are gonny do this tour. So thank you and CONGRATULATIONS. This is a love song.”  The girls play It’s Called Proof  another stripped back number, one guitar, vocals and a harmonica.

They pick up their guitars and sing their last song Carry You Home, which has a Celine Dion feel to it. They come back on for an encoure. They sing another slow and moving song Who I’m Not. During this it looks like Lizzy forgets a part, Catherine looks over and smiles and mimes the words in support. The next track is Town Called Ugly, parts of it are like the Tina Turner song Nutbush City Limits. Lizzy says at the end “Thank you so much everyone” Catherine points to the back “See you over there”. And they certainly do I think they see and speak to everyone. What a happy fun filled gig with girls who are the same.

Ward Thomas played on the 10th October in Oran Mor. 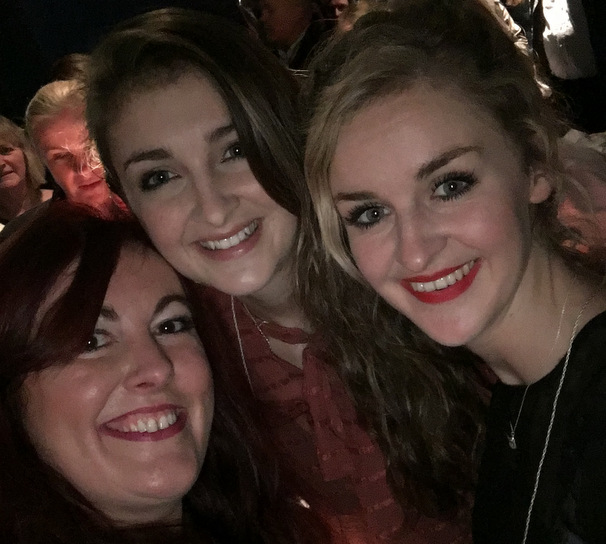