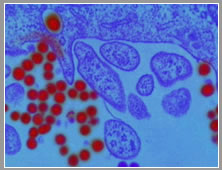 A young man dressed in white lies sleeping in a bed with a red cover. He has a sweating brow and wears a restless expression. He lies motionless for the ten minutes it takes the crowd at the Finborough theatre to filter through the door and take their seats. Trance music plays in the background.

The young man is playwright David Carter, a cocaine addict who contracted the HIV virus in 1998. As the young man awakens, hands pop out from under his bed and behind his pillows. Disconcerted, he finds the hands belong to two human representations of the components of the HIV virus with which he has been infected.

The components emerge dressed in black. Whilst they look sinister they are far from being malevolent in their personality or intent. In fact the components comprise a comedy double act, one being a slightly camp northerner and the other being a balding brute of a Cockney with an Alexi Sayle looking face.

The rapid fire dialogue and word games between the two components, sometimes complemented with interjections from their host, constitute the fabric of this fifty-five minute play. Strangely, the components engage in a synergistic search for meaning into existence, thought, feeling, happiness and God.

As time passes, the two components are joined by a third, a nonchalant middle ageing female, whose indifference and arrogance add an extra dimension to the play. The third component is much more cynical than the first two and her influence can be seen in the way the components dissuade the host from undertaking drug therapy, praise the pope, denounce the condom and destroy their first t-cell.

The main themes of the play are interwoven and revisited and mixed with random moments of insanity, such as the three components and the host dancing to the Crazy Frog song. It’s almost as if the play is a nightmare taking place inside the host’s head, in which his own thoughts, anxieties and questions are played out in the viruses’ discussions.

Invariably you find the dialogue causes you to temporarily break away from the play to explore personal avenues of thought, which evanesce as the pace and rhythm of the play re-engages your attention.

This fifty-five minute play finishes to the sound of Gary Jules version of ‘Mad World’, a terribly sad and to some degree out of place ending, to what is otherwise a tongue in cheek approach to looking at the issue of HIV infection.