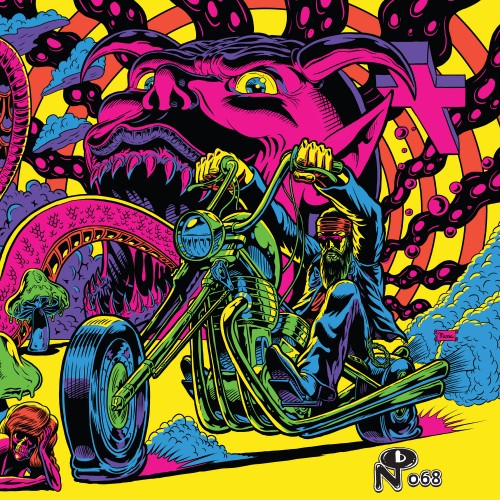 I have long been an admirer of the Numero label. Get me started and I will wax lyrical about the label night and day (just ask my wife). But the focus of my affection is the Eccentric Soul series of soul compilations–the focus of which is typically small labels or scenes that have mostly fallen off the map. Admittedly, this series is what Numero is best known for, but of late they have been expanding their attentions to other genres; early-post rock, NY punk, even hardcore. Soul music is one of my great, abiding loves and one of the reasons I love these Numero soul compilations is that they provide small pieces of the puzzle, connecting links between this artist and that label, a producer or session musician–and of course, great fucking music.

So the question here is how well does Numero fare when there is not that backstory that justifies or clarifies the initial interest? And the case in point is their latest release: Acid Nightmares–“Eighteen distorted tales of dope-fiends, pill poppers and the baddest of trips.” In short, we’re talking early 70s acid rock, which range from proto-punk a la Stooges, Blue Oyster Cult-wannabees to a mere hop and skip from the hairier end of Krautrock (think Amon Duul II). This is not the first time that Numero have dipped their toe into this sort of pool; in ’14 came the Darkscorch Canticles comp, cataloguing LOTR inspired heavy rock, and Cavern Sounds, a collection of tracks recorded in a studio built from a limestone mine in Missouri. And back they are in ’17…

Without a curiosity of the backstories of these mostly hapless bands, populated by devoted teenagers who probably packed it in to become car salesmen or something, all I have here is the music and the question: is it any good? As you might expect these eighteen tracks are inconsistent, but the general quality is solid. These Numero guys know what they’re doing! Some of the tracks are just plain awesome. The CD opens with Portuguese unpronouncables Xarhanga and ‘Acid Nightmare’ from 1973  with a blistering blueprint for what was to become NWOBHM (I get notes of Saxon with an undercurrent of Maiden…). Grave Digger by Mass Temper is raw and on the edge of falling apart but kicks some funky ass in ’71.

Some have great ideas, but the execution reveals their youth or limited studio opportunities. Drugs by Gift has an awesome breakbeat but the verses is a little clunky overall. Some, to be fair, are just a little unexceptional (sadly, Sardonicus and their Evaporated Brain in ’71). One thing is for sure – if you like songs about drugs, this is your LP: we have acid (obv), speed, hypodermics, pink pills, orange sunshine (whatever that is), drunks and red-brained women (not sure what they are either, but it sounds drug-related).

On a handful of tracks, magic occurs. Texas four-piece Purple Sun do a magnificently malignant Dooms Day with the fuzziest bass, rivalling Monster Magnet’s entire opus in one song. Apparently they once filled a mid-session break for the Ed Sullivan Orchestra–I cannot imagine! The CD ends with North Carolinans Sunn Cycle who get their Shankar on with Acid Raga. It is exactly as awesome as that title suggests, exactly to the extent to which that title amuses you.

So overall, recommended? Yes! If you have an interest in lost music from the 70s, especially harder rock music, then this is border-line essential. The sleeve notes on Numero releases are always first-rate. If you’re just curious, there’s still a lot of fun to be had–there’s enough fuzzy guitars and gratituous use of echo-chambers to keep anyone amused. The music emits a lysergic energy that is irresistible, but perhaps you shouldn’t listen while operating heavy machinery.