Playing to a packed and sold-out Irish Centre, the Unthank sisters proved themselves to be folk royalty with an hour and three quarters of inventive modern traditional songs. Blending old songs from a couple of centuries back with contemporary sentiments and arrangements, the band defied the odds by keeping a standing crowd spellbound. 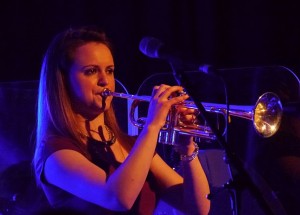 Tonight was all about the new album, with all but three tracks featured, which is a shame with such a range to draw on and a sadness because my favourite song, Monday Morning, was skipped over. That said, a gig is a great opportunity to focus just on the music without being distracted with company, mobile phones, reading or chores. And this music is worth focussing on – arrangements are complex, progressing through lengthy changes to explore all aspects of the tune. 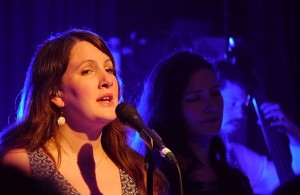 The glory of the band, though, is the Northumbrian tones of the two women, earthy and full of real feeling, they bring out the eternal golden thread of feeling from songs of generations ago as if they were the feelings of women today. The band are superb too, helped by a sensitive mix. A piano, double bass, cello, three violins, trumpet and drums make for a full stage. They perform as an orchestra, rather than backing band. Instead of backing colour, they provide fills, swells, counter-point, counter-harmony, backbeats and the trumpet takes a full vocal line itself.

Charles Causley’s poem, Hawthorn, opens the set in thoughtful mood and the title track off the new album, Mount The Air, is a long progressive piece, finishing with a clog dance. Madam, again off the new set, precedes an apology about the out of tune piano and some jokes about Barnsley. The pace is stately and gentle with gentle introductions and chat, creating an introspective atmosphere where thoughts can settle on sentiments sung and tunes played.

A couple of covers provide range – an angry one by Alfie Benge and Robert Wyatt plus Starless by King Crimson – the lack of an electric guitar is duly noted. The Wind & The Rain is a wonderfully simple song about sheltering from the elements under a bush behind a wall, The Testimony Of Patience Strong makes a voice from the Victorian mines into a voice from today and the whole is wrapped up with a reprise of Mount The Air’s clog dance.

Tonight was a warm gathering to concentrate on one of the more remarkable folk bands of recent years. Maybe a seated venue next time though, eh?