This is officially UFO’s ninety-millionth album in a three-hundred year career and they’re not looking too bad on it. Ok, so I exaggerate and the fans debate about whether it is the 22nd or the 21st album. They have been around a while though – about forty years. One of their smarter moves was swapping their early space rock for hard rock. Add to that the talented but troubled guitarist, Michael Schenker, and their name went down as having released one of the best live albums ever – the late seventies Strangers In The Night.

Here, many years later, the formula is much the same, minus the problematic Schenker. The album opens on a steady rocker, The Killing Kind, about the demons that beset us all then Run Boy Run is a classic hard rocker with bluesy figures. The last album was bluesier than I was used to but this is business as usual and Phil Mogg is in fine voice despite pushing seventy. New guitarist, Vinnie Moore (okay, he’s been around for three albums now….) sounds fully bedded in, throwing his fretwork around and keeping up a high axe temperature. That was to be expected – he wrote most of the music – to Mogg’s lyrics. Pete Way hasn’t been around on bass since health problems but is competently replaced and Andy Parker, the other founder member, is on drums.

Precious Cargo, in other hands would be slightly naff (it’s a love song about an ex) but here, the delivery is so heartfelt that it convinces like the many rock ballads on the Strangers album and is one of the stand-out tracks. The other stand-out contender is The Real Deal, melodic, swaggering and tough, it utterly belies the age of the band. Some songs like Messiah Of Love stretch credibility a wee bit with the hard-blues boasts about prowess but it’s nice to hear old blues terms like the fabled “jelly roll”. 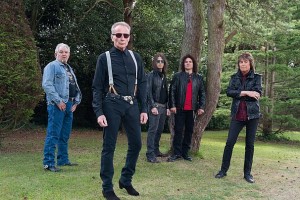 What makes UFO stand out in the old guard is the bluesy songs with no fantasy or aggrandising nonsense. There are lots of romanticising songs about men making their way, dealing with life, having tough love problems and generally toughing things out. Sung with Phil Mogg’s very real and affecting gruff punch, the lyrics form a macho package with the punchy riffs and screaming solos. I used to think of myself as too cool and knowing to like this sort of thing but I know better now – this album is a real deal, all the more surprising twenty-plus albums in. A solid live prospect still, the band are about to tour. See our live review from five years ago here: www.vanguard-online.co.uk/0907LUFO.htm