Glasgow, Friday 31st July 1919, the day of “The Battle of George Square”. Up to 60,000 workers took to the streets to join a strike campaigning for shorter working hours. Fearing a Bolshevist uprising like the one that had swept across Russia, then-Home Secretary Winston Churchill sent in troops and tanks to subdue the locals. History does not record whether or not a chant of ‘Here we, here we, here we fucking go’ swept through the crowd.….

Glasgow, Tuesday 12th May 2015, American rapper and producer Tyler, the Creator has just finished a track called ‘Deathcamp’, which was preceded by one called ‘Bitch Suck Dick’. He sits on an amp with a huge smile on his face as a packed hall of young Glaswegians chant in unison ‘Here we, here we, here we fucking go’. I smile too and look around. How did I end up here?

As we approach The World Famous Glasgow Barrowlands Ballroom, we are greeted by a queue that stretches right round the corner of the old venue. Approaching nearer still, I am struck by how damn YOUNG everyone here is.   The vast majority of attendees are probably between ages 16 – 22, roughly a 50-50 male-female. All dressed up and excited for the show and I’m worried that I look like a tragic hipster dad. Even though I’m only 32. And childless. And unhip. My self-consciousness is further compounded when we take our place in the queue and the guy in front of me is wearing the EXACT same Adidas tracksuit top as me. My girlfriend, the reason I’m here, can barely control her laughter and is threatening to introduce us to my fashion twin. Thankfully, I’m spared as we slowly make our way in.

We get a good spot, centre and middle as the old hall continues to fill up with more blasted youngsters. I love the Barrowlands because of it’s intimacy and the fact that it hasn’t been done up since the eighties. Every movement of the stage lights causes the crowd to stop and cheer, in hopeful anticipation. Eventually, a DJ arrives on stage and starts warming up the crowd with a mix of rap tracks, all of which are sang back to him pretty much word for word by a bouncing throng.   Soon, Odd Future member Jasper Dolphin joins the DJ onstage and then it happens. Tyler literally bounces like Zebedee across the stage and the place goes nuts. My better half’s feet may have left the ground. Kitted out in the ubiquitous GOLF snapback, white tee and turquoise shorts, Tyler is a non stop blur, strutting, preening and dancing as the first few tracks fly by, every rhyme being shouted back to him. At the first break in proceedings, he is introduced to the age-old Glasgow gig cry of ‘Here we, here we, here we fucking go’. Which he loves. He then asks the almost-exclusively white crowd if there any ‘black people in the house’. He tells the scattered voices they are ‘not alone’, to huge cheers.

On record, Tyler, the Creator can be hard work, featuring sprawling tracks with minimalist interludes, often near seven minutes in length on already-long albums. Sometimes, the music he makes exudes pure unhappiness. However, this show is fat free and stripped back. No stage backdrop, just a sound system, three mics and basic lighting, Tyler sticks to the verses, cutting loose anything that may give the audience a two minute breather. If, like me, much of your gig going has involved rock or metal shows, you’d find much to enjoy here. The verse/screamed chorus arrangement of much of the tracks allows for much pogoing, some brave crowd surfing and, on more than one occasion, a circle pit. As undoubtedly talented a producer Tyler is, he wants to put on a good show and sticks to the thrills. As he says when the crowd chant for hit track ‘Tamale’, “I know what you motherfuckers want”. 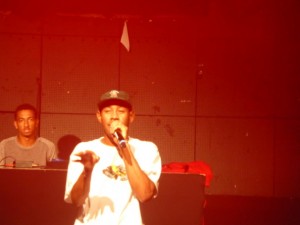 Much of new album ‘Cherry Bomb’ is aired tonight and it’s on the newer material where Tyler looks most enthused and energetic. The only time he looks to be going through the motions is, incidentally, during his best known track, ‘Yonkers’ AKA the One With The Video In Which He Eats A Cockroach And Hangs Himself. This matters not as the track is met with a rapturous reception and audience participation.

This music might not be your thing. You might not enjoy the lyrical content. Controversy has followed Tyler and the Odd Future collective due to accusations of misogyny and homophobia in their lyrics. However, there is no denying that Tyler, the Creator is A Star. He is as charismatic as they come and, as a frontman, is hard to take your eyes off of. He has an easy charm. He knows the job. At one point, he takes a mobile phone from someone near the front to talk to their friend who didn’t get a ticket (“You fucked up!”) He leads duelling chants from both sides of the hall during a fevered ‘Domo 23’. There is also a very funny attempt to get us to clap out the beat at the beginning of a track. After three failed attempts, Tyler gives up, doubled over laughing. We suck. We laugh too. 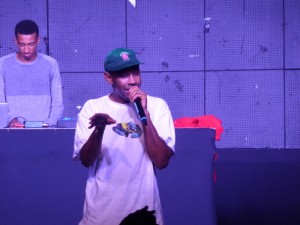 It’s all over in under an hour and a half. After playing cuts from all three of his solo albums, he grants the crowd their wish by finishing with ‘Tamale’, prompting the formation of quite possibly, the lamest circle pit ever, but it’s the thought that counts. He teases throwing his shirt out, hesitates, then lobs it towards outstretched arms. We file out. The merchandise stall, which was doing a brisk trade beforehand, is now mobbed. You can buy Tyler snapbacks, tees, socks and, most intriguing of all, a t-shirt with a ‘white power’ symbol, the Iron Cross emblazoned with the rainbow colours associated with the Gay Pride movement.

I had a lot of fun. I may have danced, slightly. I was nervous beforehand but glad I gave it a go. Try something different. If you’re an indie boy, maybe go to a dubstep night. Goth girls, give Taylor Swift a go. Don’t start wearing a snapback though, it won’t suit you.