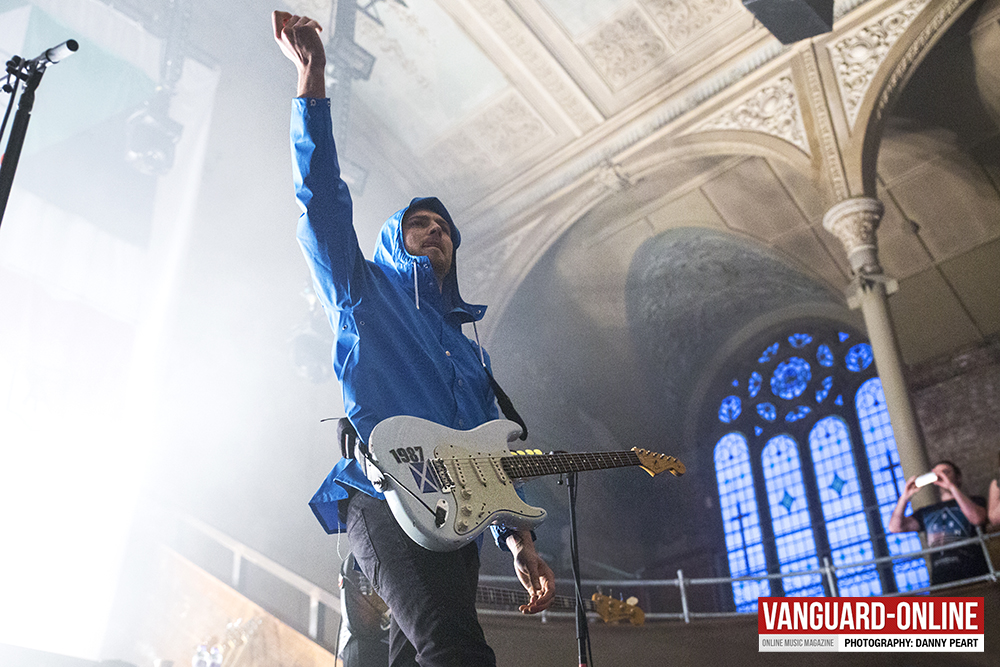 It’s a beautiful evening in Manchester, as everyone makes their way into tonight’s historic venue to be greeted with an overpowering room beautifully lit by the setting sun through the stain glass windows. In the distance the first band make their way to the six-foot tall stage to get tonight’s show on the way.

The last time we saw Lonely The Brave (7) they were in a much smaller club venue, looking pretty tired out and run down from a long tour, and also lacked in confidence on stage. Move 2 months on to tonight however, and we can see some change in the Cambridge quintet.

They take to a huge towering stage in front of a half full Albert Hall and rise to the challenge of getting the night kicked off just right. It’s still early, the room is filling up quickly, and a lot of light shines through the stained glass windows of this historic building as the drums and guitars ring out to the opener ‘Victory Line’ which sounds epic in a venue of this size. The mighty ‘Backroads’ follows and has people’s attention as many here tonight will have heard the fantastic song in the past few months even if they still don’t know who Lonely the Brave are, however the majority here early tonight are singing along and have purposely got down early to see these guys. 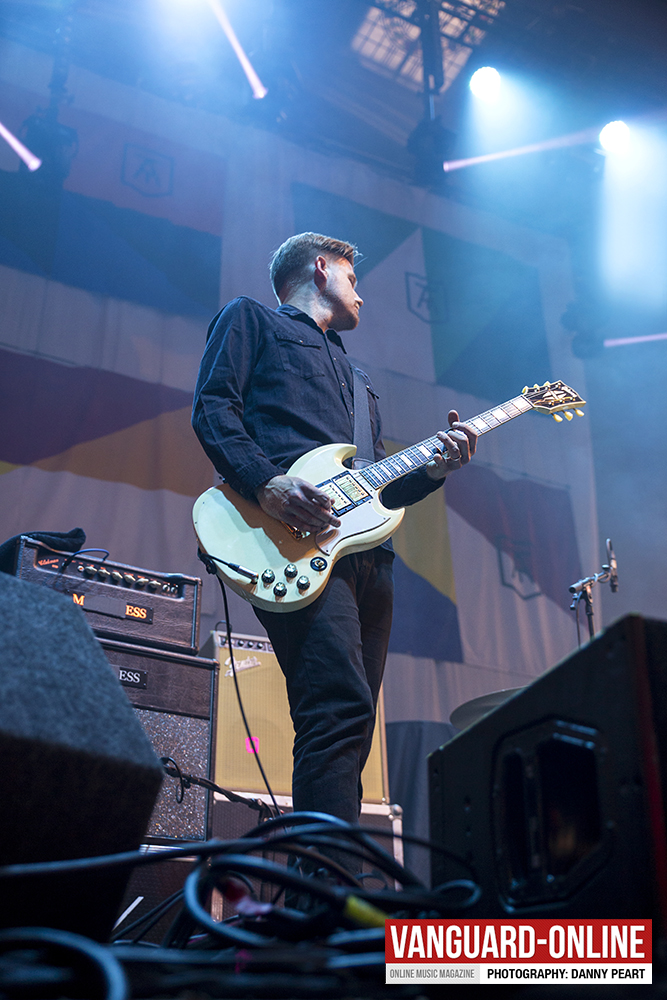 As the set progresses the band sound and look tight as the guitarists move around the stage whilst Mark Trotter encourages the crowd to sing along as he mouths along the lyrics to them through every song. Frontman David Jakes is noticeably stood back to the side of the stage out of the limelight, but looks more confident in himself than of previous, and his vocal performance tonight is spot on.

The new single ‘River River’ treats the crowd to some newer material that leaves us optimistic of what is to come from the Cambridge lads in the near future when they re release the debut album ‘The Day’s War’ with 12 previously unreleased tracks including ‘River River.’ It’s filled beautifully flowing guitar work and a leading baseline, with a big chorus as you would expect.

‘Trick of the Light’ is the set highlight and has the static crowd moving slightly as they sing along. Lonely the Brave are not a band who you would expect to see the crowd opening mosh pits for and jumping around like you would expect at a Twin Atlantic show, but a relaxing stunning set to watch and sing along too is enough to get people ready, and it’s also the perfect music suited to this beautiful venue as the acoustics are fantastic, which is shown perfectly in ‘The Blue, The Green’ which slows things right down to close the set. A well deserved warm round of applause as the quintet leave the stage after a short but sweet set, which we can look forward to seeing again this summer at a few festivals across the UK. 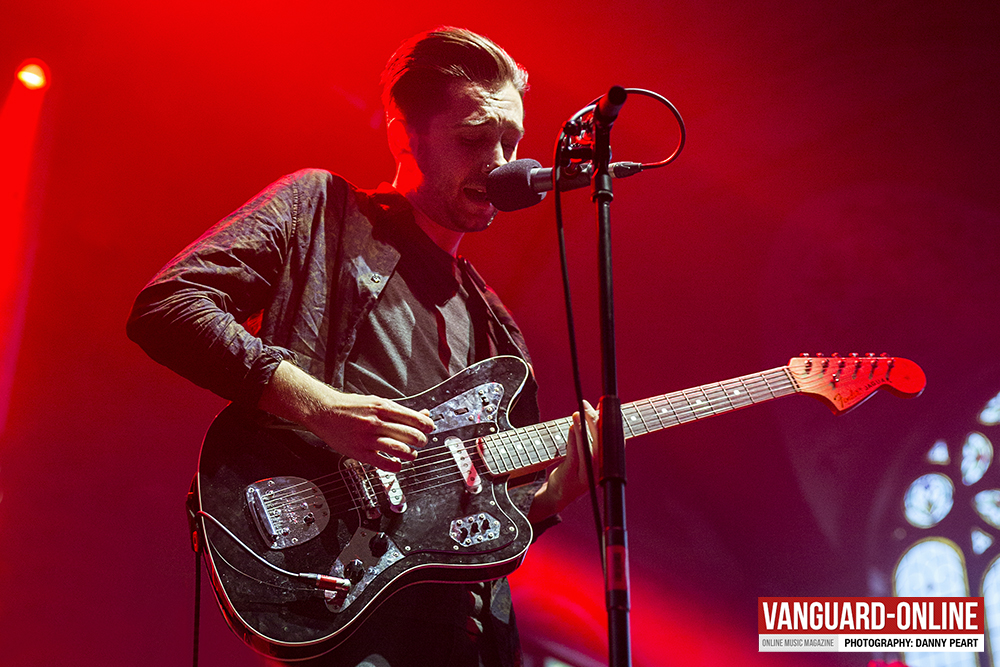 We know very little about Eliza and the Bear (8) so needless to say we were looking very forward to seeing what they can bring to the show tonight. A loud chatty crowd is disrupted as the band take to the stage with the familiar ‘Friends’ which instantly steps the night up a level with its upbeat sing along chorus ‘We’ve got friends, we’ve got family here,” which proves to be very true as the room has suddenly filled up many more lively people for Eliza and the Bear.

The band sound fantastic and don’t struggle to fill the stage with their huge presence. Frontman James Kellegher and Guitarist Martin Dukelow share vocal duties back and forth from time to time which sounds fantastic, backed with a big sounding band. The two also do their part in making sure the crowd are involved and enjoying themselves as the teach them a few words and have them clapping along in the breakdowns during the likes of ‘It Gets Cold’ which one of our personal favourites of the set that provides some character and the trademark sound of the band.

A set filled with feel good summery anthems suggests this band is perfect for festivals, and they leave everyone with the emphatic ‘The Southern Wild’ which is the perfect way to close the set with its massive sounding chorus filling the room. Eliza and the Bear have surely won themselves a few new fans tonight including us, and we will all be keeping a keen eye on these guys in the months to come. 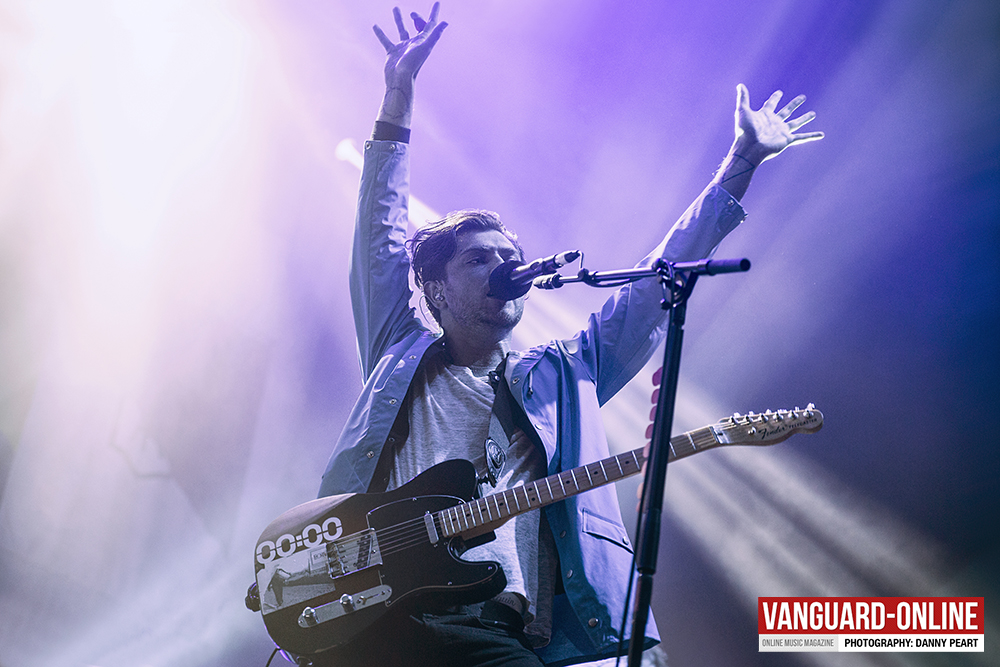 An almost full room waits patiently for Twin Atlantic (9) as they stand staring at a towering white backdrop with four colourful flags hanging recreating the album cover of the Scottish rockers third album ‘Great Divide,’ which has had a fantastic response since its release last August pushing the band up the line up on the festival bills and helping sell out a fantastic tour last November. However even though this tour is only a short one, the venues have doubled in size and the dedicated army of fans have almost sold them all out.

So it’s no surprise to see frontman Sam McTrusty taking to the stage with a smile on his face as he and the band are greeted to a deafening echo of screams around the Albert Hall. Sam grabs his guitar as he looks dressed for a downpour in his blue jacket with his hood up, and smashes out the opening chords for the fantastic ‘Make A Beast Of Myself’ which sounds explosive and has everyone jumping from the very start. A couple of guitar issues for Barry Mckenna are making things a little difficult for the guitarist, however it’s soon sorted before the band fly into the hit ‘Hold On’ leaving everyone screaming the lyrics back to Sam on stage. 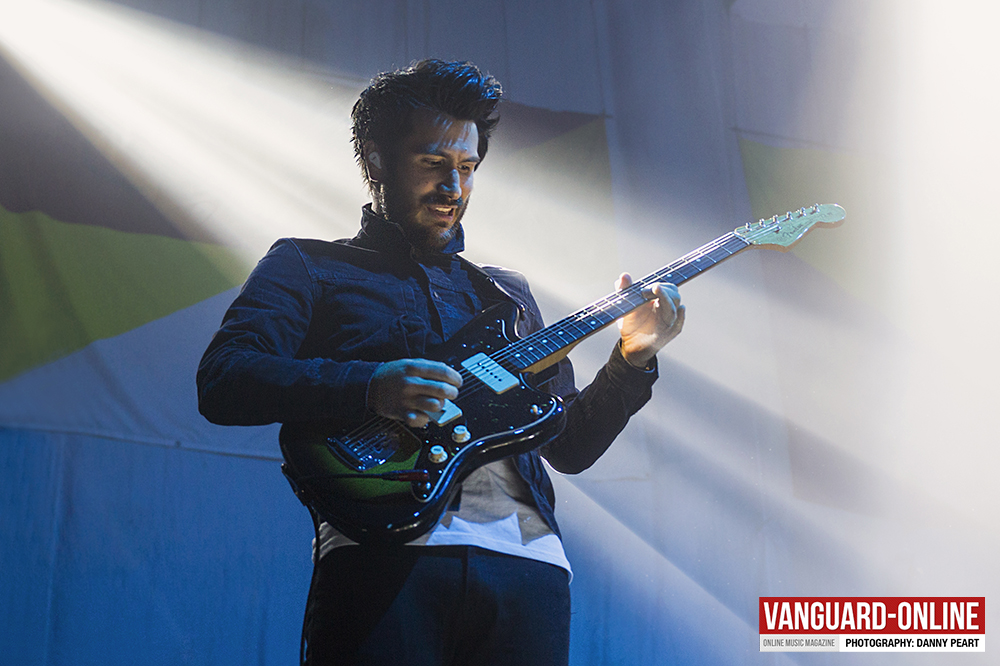 The ironically titled ‘Fall into the Party’ has everyone stumbling over the guitar riffs as they sing and scream along to the hefty chorus, before another electric performance for ‘Actions that Echo’ featuring some rather impressive guitar work by Barry who we can’t take our eyes off tonight as he slides through some slick picking, tapping and incredible riffs through song after song, but is still battling with a few technical problems with his guitar from time to time. “Who needs guitar when you have a bass player like Ross?!” jokes Sam as he drops the spotlight onto Ross McNae who has had a seamless night so far as he and Drummer Craig Kneale hold the basis of each song together like a rock.

Sam’s voice is noticeably a little rough tonight, but non-the less still sounds flawless screaming and singing his way through the set, and a little something bottled up at the side of the stage, which we refuse to believe is water, is repeatedly being visited for a quick swig to keep the vocal chords top notch. The power-driven ‘Edit Me’ has the whole room bouncing again, leaving us wondering how much more this historic venue could take before everyone pulls it to the floor.

A more than welcome breather occurs mid set as the Scottish quartet slow it down for a moving performance of ‘Oceans’ with Barry sat to the side of the stage playing the cello immaculately as Sam takes front stage with his acoustic guitar. It’s to no doubt that these guys had in mind playing this song in the likes of the Albert Hall as this venue was built for beautiful moments such as this.

It’s not long however until things are back in full swing, chants of “Here we fucking go!” ring out as Craig leads the way into the amazing ‘I am an Animal’ with a powerful piece of thunderous drumming. The breakdown soon arrives and Sam takes a moment for a little crowd participation to make sure everyone is joining in. “Ladies and gentlemen of Manchester, I want you to scream as loud as you can!” (Deafening screams follow!) “Let me hear you say Whaaaayoooooh! … That was ok… easily the best of the tour so far, and Manchester has a history of being the best city of the whole tour, so please don’t let us down!”
A request that every single person in the room sits down on the floor is instantly followed by the well-behaved crowd. “When this next bit kicks in I want you to loose your mind!” The anticipation builds around the hall as the song progresses with “Wake up everyone…” before the chorus kicks in to a thunderous explosion across the room with everyone flying back in the air to their feet and going absolutely mental with the band joining in on stage. “That’s what I’m talking about!” 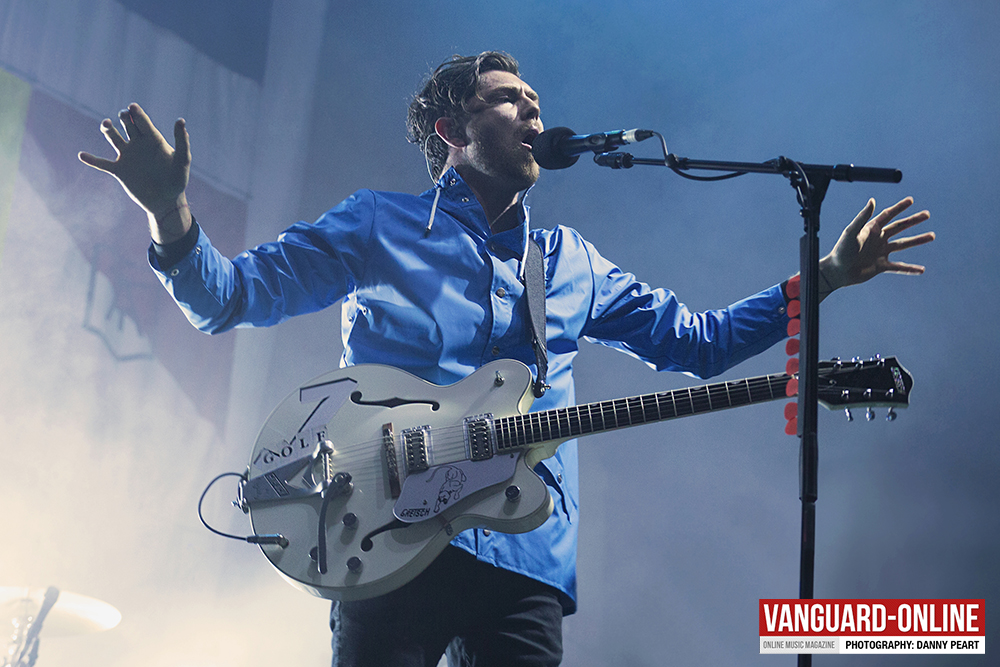 Sam thanks the crowd for singing back to them over the past 8 years of touring as the emotional ‘Crash Land’ delivers the loudest singing of the night as ever, barely leaving us able to hear the band on stage. Fan favourite ‘Free’ finishes things off perfectly before the predictable encore leads it’s way with a great little drum solo from Craig as everyone takes the stage for ‘Brothers and Sisters’ which is dedicated to a friend of the band’s from Manchester who is no longer amongst us, which only makes the moment more emotional as Sam carries a moving vocal performance throughout the song.

Only one last track can be left to play after a full throttle performance tonight by the Scottish rock band, and it is in fact the lead single of ‘Great Divide’ that closes the night. ‘Heart and Soul’ has the crowd going crazy for one last time with Twin Atlantic throwing everything possible into the last performance of the night.

This band has picked up a lot from touring the past eight years or so, and never fail to blow our minds. Tonight has only raised our expectations of Twin Atlantic and we’re not quite sure how they can top a performance like this, but they have managed to find a way to make us eat our words the last few times we have said the same. Next up is the festival season for these guys and if your at one with them, make sure you don’t miss them, because trust us, you’ll definitely regret it! 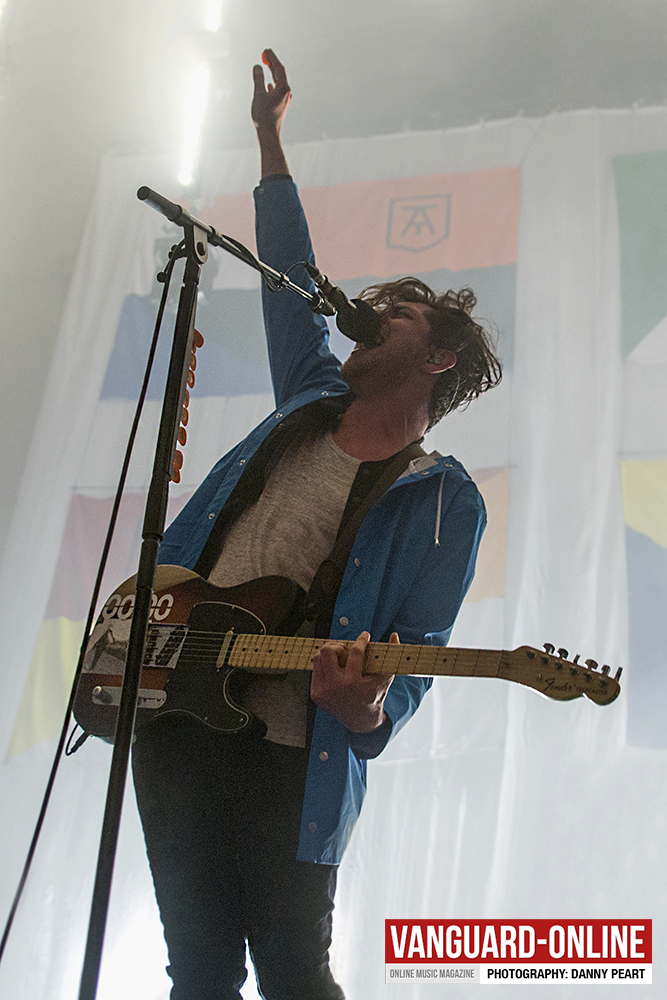