I am not a churchgoer. At all. But I am guessing it is out of the ordinary to find a queue to get into one snaking up the path and on to the street pavement. This is the first thing I encounter during my day at the True North Festival in Aberdeen, the final day of the weekend-long event. Queen’s Cross Church in the city’s leafy West End is the venue for what is billed as a ‘Relaxing Sunday’ featuring folk singer Rachel Sermanni and The Unthanks.

The venue itself is very well turned out, reflecting the prosperity of it’s location. There is a massive quilt hung up behind the stage of a crucifix against a rainbow coloured background. There are bibles behind many of the seats. I read my Kindle as I wait for the show to start.

Rachel Sermanni is a folk singer from the Strathspey area of the Highlands with two albums and many, many miles touring under her belt. Sermanni begins her set solo with a high, pristine vocal reminiscent of Vashti Bunyan. On the next song, where she is accompanied by piano, her vocals become deeper, huskier and more commanding. The transformation is soon complete as, eventually; a full band backs her. Maybe not the ‘relaxing Sunday’ many of the patrons here had in mind. Sermanni’s between song interactions are quirky and charming, lulling the audience into a false sense of security perhaps. Song titled ‘Sleep’ (‘a song about sleep’) and ‘Tractor’ (‘a song written while sitting on a tractor’) are deeper than their simplistic titles suggest, swirling melodies at the mercy of Sermanni’s strong vocals. It’s the quieter moments that really impress though, singer and guitar alone at the mike.

I was first drawn to The Unthanks because I thought their name had something to do with the Alasdair Gray novel ‘Lanark’. It doesn’t but I stayed for the King Crimson covers and the downright strangeness. Although primarily labelled a ‘folk’ band, The Unthanks seem to juggle genres at will. Backed by a small strings combo, piano, bass and trumpet, some tracks veer into agitated jazz, others would have been labelled ‘prog rock’ in the early 70’s. However, it is the voices of sisters Becky and Rachel Unthank that dominate proceedings, the varied instrumentation never overshadowing them. They take lead on different tracks, Becky’s voice more husky, breathy and lived in, Rachel’s higher pitched and often conversational. The subject matter of songs is often dark, sometimes downright bleak. Acknowledges this at one point. After leading a sing-song of ‘Happy Birthday’ for Ben the soundman, she says “Right, back to the misery”. However, this is never a depressing experience as the group create some beautiful music, coupled with the quiet charisma of the sisters. There is a strangely mesmerising moment when they change out of their heels into tap shoes practically in unison before self consciously tap dancing along with the music. You can’t help smiling. Even the song about the young girl working in a 19th century coal pit won’t get you down. 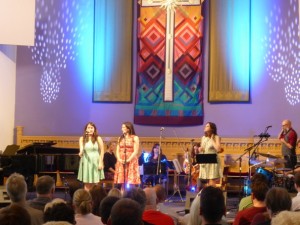 I jump into my car for the short journey across town to the city’s Music Hall for an event called ‘Long May You Run’, a tribute night for Neil Young, who will be 70 years old this year. Again, it’s an all-seated affair. The audience for this skews a bit older than that of the last event, lots of well refreshed couples, some tucking into the ‘Scottish Tapas’ on offer, others squeezing into Neil Young t-shirts bearing the artwork of his cool stuff, not bloody ‘Harvest’…

The event has been put together by Scottish singer songwriter, and BBC Radio Scotland host, Roddy Hart, backed by his band, the Lonesome Fire. The format of the event is that a guest vocalist sings a song solo and then another backed by the Lonesome Fire. This is an effective set up, as it keeps things interesting and reflects the conflict in Neil Young’s music between that of the noisy rocker and the lonely troubadour. Justin Currie of Del Amitri fame pops up on ‘Everybody Knows This Is Nowhere’, hamming it up slightly. Eddi Reader, formerly of Fairground Attraction and latterly a vocal supporter of Scottish independence, does ‘Only Love Can Break Your Heart’….well attempts to before insisting the band start the song from the beginning after she fumbles the lyrics hallway through. Second times a charm, backed up by founding member of The Delgados, Emma Pollock on vocals. Another mishap occurred during ‘Don’t Cry No Tears’, when Justin Currie realised over hallway into the track that his guitar wasn’t plugged in. This mistake was rectified, allowing Currie to jam along in a rather showbiz-y extended outro to a song from Young’s ‘cocaine’ album. (The stories about the recording of the album in legendary biography ‘Shakey’ are eye-opening.) Other highlights on the Generation Game-style conveyer belt are Withered Hand aka Dan Willson nailing a spot on Shakey-like vocal for ‘Don’t Let It Bring You Down’ and Sarah Hayes of Admiral Fallow interpreting the little-known ‘Razor Love’ from Young’s generally unloved ‘Silver and Gold’ album. 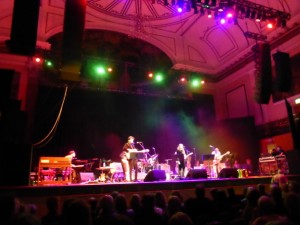 This was a very enjoyable show, even for a Neil Young obsessive like myself who prefers the more obscure stuff from the great man’s extensive back catalogue. This show was suitable for fans and novices alike. No envelopes were being pushed here. Unsurprisingly, much of the material tonight was drawn from the classic albums such as ‘After The Goldrush’, ‘Zuma’ and yes, ‘Harvest’. No one was here tonight to hear stuff from Young’s 80’s synth rock period or ‘Greendale’. Or maybe they were. Maybe I missed Eddi Reader wailing along to ‘Computer Age’ in the second half because, breaking kayfabe here folks, I had to bail out at the interval to make it to another venue for the festivals closing concert.

En route to the Lemon Tree, I saw a young lad, down on his luck and probably pissed, nearly run over by the biggest Range Rover I’ve ever seen. The ruddy, red faces inside the truck looked on, pinched and disapprovingly as the lad sauntered on into McDonalds. It was the most Aberdeen thing I saw all night.

As usual, the Lemon Tree was a sweat box, very busy with a young, hip crowd. I wouldn’t consider myself young and hip like. I was stood wearing a Godspeed You! Black Emperor t-shirt, a grey coat, a backpack and sipping an Irn Bru. First on is Kathryn Joseph, recent winner of the Scottish Album of the Year Award. The reception for Joseph is ecstatic, having lived and performed in Aberdeen for a number of years. She also used to work at behind the bar at this venue. Some journey. Joseph performs solo at piano, accompanied by percussionist Marcus Mackay. The Voice dominates, reaching every part of the venue, at times high and piercing, at others low, strangled and pleading. This music is almost too intimate. Like Bonnie ‘Prince’ Billy’s classic album ‘I See A Darkness’, I sometimes think ‘Shouldn’t I be listening to this alone?’ It feels so personal. Of course, I’m talking bollocks. The audience greets the conclusion of every song ecstatically, causing Joseph to smile radiantly. There’s even one woman at the front who dances ever so slightly throughout. Joseph’s image fits the music, almost austere in a pastel pink top and a large plaid skirt. She rocks just enough so you’d notice on her stool, sometime snarling and spitting her lyrics, her face conveying the emotion of her songs as she scans around the room. It’s as if a Primary One teacher thought she’d try something different at the classroom piano during music hour. Her performance is utterly arresting. Mackay’s contribution is vital also, scarping a violin bow down the edge of a cymbal on some tracks, adding various drones to others, giving the music an even darker hue. When she speaks, Joseph comments on tonight’s ‘blood moon’ and the crush barriers erected at the edge of the stage and apologies for ‘being a prick about Aberdeen’. But no one here thinks she’s a prick. She is a very special talent and her album is a must listen. 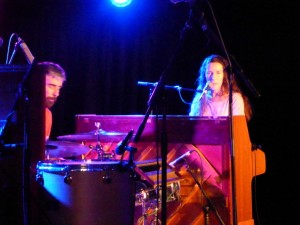 To close out the final day of the festival, we have another act that have previously won the Scottish Album of the Year Award, Aidan Moffat and Bill Wells. Moffat, formerly of Arab Strap, helps setting up the stage and soundchecks while wearing cargo shorts and a trackie top. He couldn’t look more relaxed if he was getting ready to take his kids to the park. The set up resembles a small jazz combo, Wells on piano, a couple of horn players, Moffat has a small drum kit set up at his mike. Moffat’s tales of drinking, shagging and middle aged sex are half crooned, half spoken over Well’s sparkling backing. There are laughs at particularly funny lyrics, and at Moffat’s easy going between song banter. Emma Pollock, who was performed at the Neil Young tribute night earlier in the evening, wanders in clutching a pint of lager. At times, the show sounds a bit like Tom Waits before he started using bones for percussion. But more upfront. For example, the introduction for one track:

‘Aye, well this is a song about shagging in the kitchen’.

That kind of thing.

A Moffat and Wells gig is more like listening to the most interesting guy in the pubs life story rather than a music gig, but with stories as captivating as ‘The Copper Top’ and ‘The Unseen Man’. 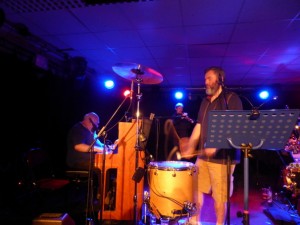 So, it was a long day. Festival days usually are. However, I didn’t get rained on or covered in mud, didn’t have to use a Somme-like trench as a toilet and I didn’t have to camp. If that’s yer hing, fire in. True North festival was a success in that it managed to attract some top quality singer songwriters to an area of the country that often misses out on top quality live music. Also, it seems that the demographic attracted by it was wide and varied. All the venues were mobbed. In fact, there were people waiting outside Queens Cross Church in case anyone didn’t turn up and they could buy tickets. Hopefully, the success of this years festival will mean that it will take place again in the future, if only to save me having to trek all over Scotland to see live music. Fingers crossed.