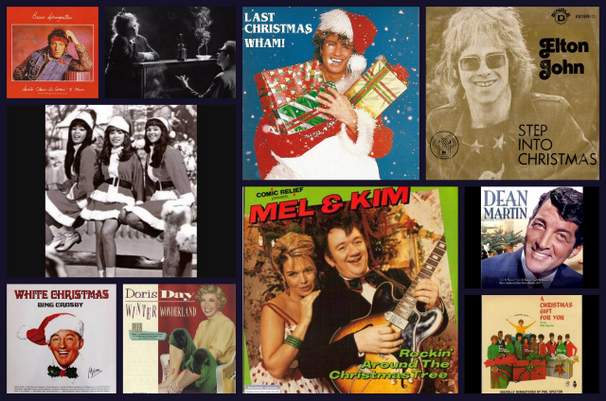 In the year 2000, Graeme Demianyk, put paper to pen for Vanguard Online to identify the best ten Christmas records to date.

Christmas – what a magical time. Surrounded by family, friends and your dog Clive. Chestnuts roasting on an open fire, snow covered vistas … and very bad music. (“No mother, not Cliff again!”) As John Lennon once sighed, “so this is Christmas.” Well John, I hate to correct one of your many pompous, self-serving beliefs, but I think it’s time for a revision of the traditional standpoint. Christmas is a time for truly great records.

Exhibit A: ‘The Phil Spector Christmas Album.’ In 1975, the uber-producer of George Harrison, John Lennon, Tina Turner and the Jackson’s (to name but a few of the stars he worked with) released an album of the most uplifting, majestical and innocent songs ever written by man. Containing Spector’s trademark “wall of sound” production technique of luscious orchestral arrangements, ‘ … Christmas Album’ offers such crimbo classics as ‘Rudolph the Red Nosed Reindeer’, ‘Santa Claus is Coming to Town’ and ‘I Saw Mommy Kissing Santa Claus’, indicative of what Christmas can inspire.

Exhibit B: ‘Fairytale of New York’ by The Pogues and Kirsty MacColl. Nothing quite sums up the beauty of Christmas than a toothless, grinning fool (Shane McGowan), pissed up on booze and crooning as if his life depended on it. Everyone has that boyfriend/brother/father/uncle/granddad who is prepared to make a complete spectacle of himself in the name of Christmas. Shane McGowan is that spectacle. Pure genius.

Exhibit C: Christmas has produced some of the most unthinkably eccentric records. Who ever would have paired Bing ‘White Christmas’ Crosby, the grand parents favourite, with the androgynous, sex-alien that was Ziggy Stardust-era David Bowie for a curious rendition of ‘Little Drummer Boy’. And what of arch-indie pranksters Half Man Half Biscuit and their humorously titled ‘All I Want For Christmas is the Dulka Prague Away Kit’. This was the Merseysiders homage to arguably the greatest Christmas gift of all, Subbuteo. ‘Last Christmas’ by Wham! sees George Michael at his most tortured and introverted, a performance he would never again hope to repeat in his lengthy career. Also Jazz legend Miles Davis produced a typical musical odyssey on ‘Blue Christmas’.

It is, however, undeniable that many records dedicated to Christmas have been quite dreadful and have become all too familiar. The relentless rotation of Slade’s ‘Merry Xmas Everybody’ and ‘I Wish it Could Be Christmas Everyday’ by Wizzard that happens EVERY CHRISTMAS is nausea inducing. Similarly, Cliff Richard’s ‘Lord’s Prayer’ and ‘Walking In The Air’ by Aled Jones are aurally offensive. Richard and Jones are further united by the fact that during a period of supposed peace, joy and celebration, you want to punch both the smug gits lights out. To this day, Christmas is still synonymous with terrible tunes. Ever since the tear-jerking ‘Stay Now’ by East 17, if a song has sleigh bells in the background it is deemed as in the festive spirit (See similar marketing tools deployed in the new singles by S Club 7 and The Sugarbabes).

The point is, in the words of Paul Calf, that amongst this shite there is always a speck of gold. Imagine if ‘Mr Hanky, the Christmas Poo’ had been number one at Christmas. Despite being juvenile and crass to the extreme, the song offered the opportunity to watch the Christmas Day Top of the Pops with your nearest and dearest (grandparents in particular) with a degree of excitement. To have Jamie Theakston announce the aforementioned title, the look on their faces followed by comments such as “Kids today” or “This country’s gone to the dogs”, it would have been priceless. Christmas could have produced the greatest punk rock gesture of the last few years.

Furthermore, Jeepster Records have this year released an album of so-called credible artists having a stab at Christmas related songs. Belle and Sebastian try ‘Oh Oh Come Emmanuelle’, The Dandy Warhols butcher ‘Little Drummer Boy’ and Teenage Fanclub have written “Christmas Eve”, all of which makes for a refusing alternative to Noddy, Aled or Cliff. In a season of goodwill to all men, proceeds from the album go to the Big Issue Foundation.

Christmas may have become a capitalism-addled washout and Christmas related music often epitomises that point. But there are some magnificent records that can still provide the unmistakable Christmas magic.

Well what do you think?

Has anything come along since the year 2000 that you’d add to the list?