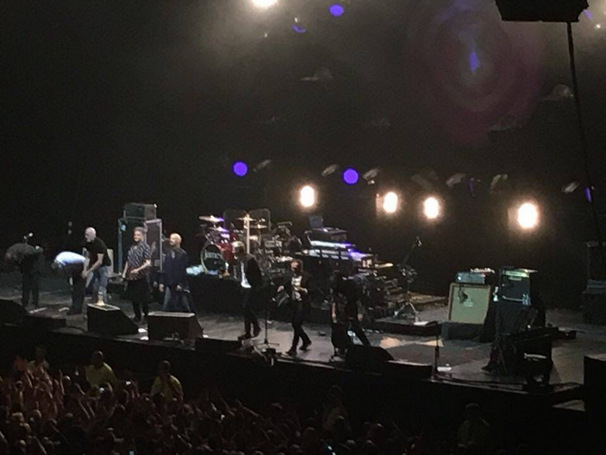 It may be hard to believe, but once upon a time, back in the pre-Britpop era of the early 90s, James were one of the biggest groups in the UK.

Sure they date further back than that, being the mildly unfashionable band mentioned in passing while fellow Manchester types The Smiths, The Stone Roses and Happy Mondays came and went, and then imploded.

Fast forward 30 years and Tim Booth and co still have it running like a well-oiled machine.

They don’t have the laddish swagger or the drug culture connotations of the Hacienda. Instead they have massive hooks, emotive guitars, and a powerful vocal undercut with genuine tenderness. They also have lyrics everyone knows and of course an 8 piece band.

These days Tim Booth is bald , but more than a few of the audience boasted receding hairlines or a smattering of grey.

For 2 hours we were transported back to the 90s reminiscing of times gone by.

Booth literally held our hand, he spent a lot of time in the audience.

James belt out classics like Come Home, She’s A Star and Getting Away With It All, moving through their discography with Moving On and introducing a fantastic new tune, Moving Down South.

James didn’t fill the Glasgow Hydro but once they started playing there was not a person in the place who would have noticed an empty seat.

They are one of those bands who give everything to the audience, often stopping and restarting songs to ensure the audience get perfection.

The only problem with James is they don’t visit Glasgow every week. If they did I, for one, would be there every time.

They have the power to make every person in the crowd to feel as if they are a part of the bigger machine, the machine that is James.

James played the Glasgow Hyrdo on May 19th 2016