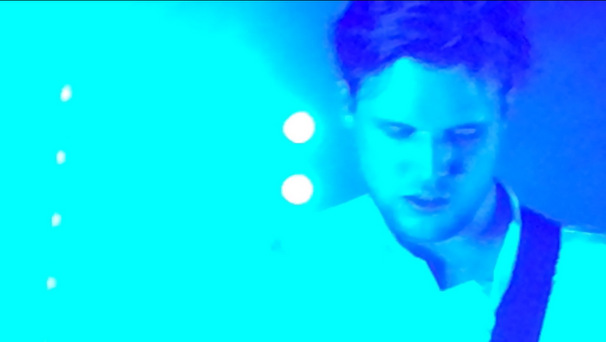 The crowd were thoroughly eager for the White Lies to make their entrance, they were already cheering for them before any sign of an appearance. The crowd was quite a mix from young to old, mostly men but down at the front section it was mostly women.

After 3 consecutive top 5 albums White Lies released their 4th album Friends on the 7th of October. It was their first release with their new label BMG. They were temporarily without a record deal due to a bout of company reorganisation. It meant they could start Friends on their own without the pressure of a deadline, budget or a producer.

The Friends album has disco grooves and exquisite ballads. It’s about how things move on in people’s life’s, growing up and how with friendships not seeing someone for a long time doesn’t matter so much. Friends was recorded in Brian Ferry’s private studio in London Olympia. The band had help from Grammy Award winning engineer James Brown (Foo Fighters, Artic Monkeys), David Wench (Caribou, FKA Twigs) and of course their all time collaborator Ed Buller.

White Lies key members are Harry McVeigh, who is the lead singer and guitarist; Charles Cave who is the main song writer and plays bass guitar and does backing vocals and Jack Lawrence-Brown on drums. They are a London trio. There was also Tommy Bowen on keys. The band came up with lots of names for themselves, the way you do when naming a baby. Their name “White Lie” signifies a wanting to gently protect the unsettling truths in the lyrics.

When they came on stage it was dark and Jack started us all off with a drum roll. The first tune  was Take It Out On Me. This song was first called 89-1-3; it was inspired by a social networker on a friend’s Instagram account who kept responding under pictures with pseudo biblical verse. From the profile they discovered he lived in a remote cabin with a rough looking dog. He posted weird videos and quoted random numbers. The crowd sang and joined in the beats with their arms raised. The lighting on stage appeared as the kind of lights that light up dressing room mirrors.

Harry was dressed very smart with a white long sleeved shirt, black trousers and a ‘my cats just died’ look. He was also wearing peachy pink socks and black gazelles. Charles was a lot more casual  in black t-shirt and jeans with black doc like boots.

Harry sang lifting one hand or sometimes with both hands up in the air; looked up high alot and lifted his lip up at one side like Elvis. His shoulders were always shrugging up and down and he was on tiptoes moving up and down to the beat. With eyes closed and face screwed up he put alot of passion into this first song. He shouted “Glasgow let me hear ya!” near the end and sang the chorus together with the crowd, with only the keyboard accompanying. 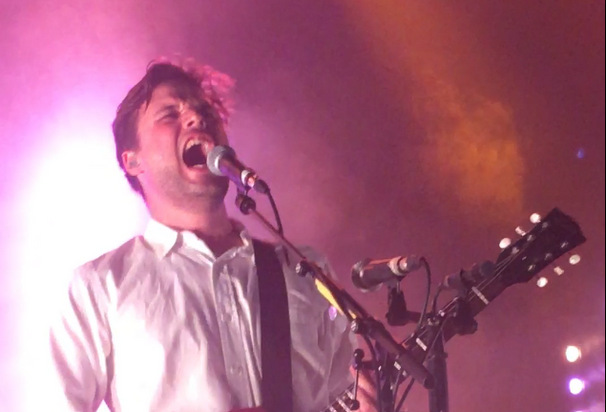 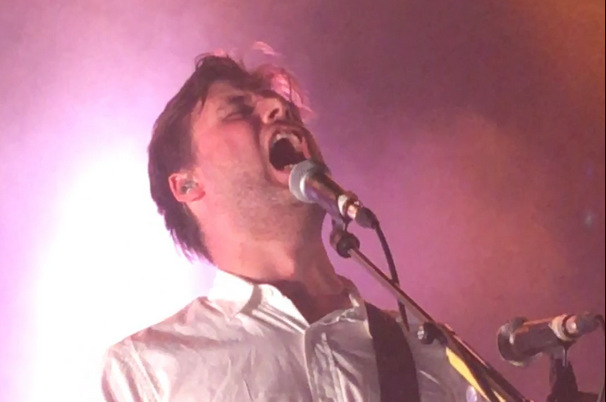 Pink lights now filled the stage and Harry sported a big gorgeous smile as he sang There Goes Our Love Again. It was a lovely ballad from the album Big Tv released in 2013. The album Big TV was about an Eastern European girl trying to find an absentee father. This song is about the constant arguments she has with her boyfriend about her drifting.

Next the stage turned lilac with strobing, the band played Too Lose My Life from the album by the same name. The album itself is gloomy, to do with death or failed relationships. As he sang “And there’s a part of me that still believes” he bounced his fist off his heart and then pointed his arm upwards before promising “My soul will sore above the trees!” He then egged the Glasgow crowd to sing with him again.  Charles lowered the tones singing in between Harry’s voice. It really suited the style of the song, it sounded a bit like New Order. 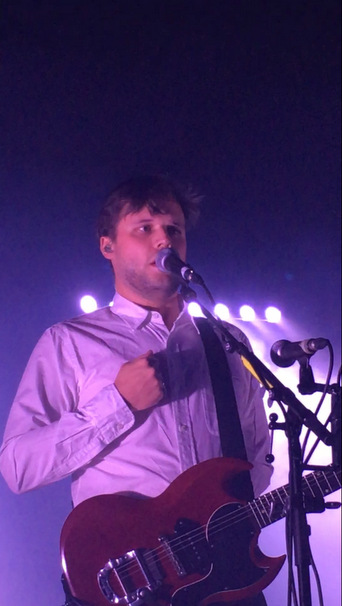 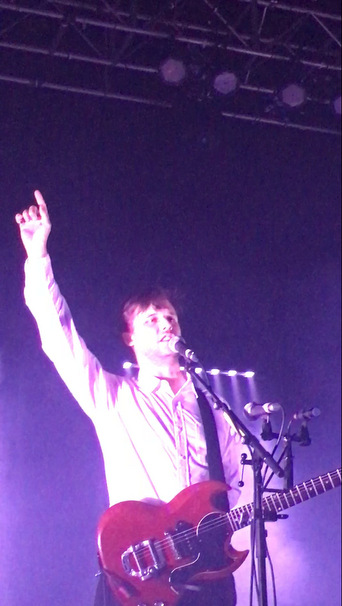 Harry then changed guitar. The crowd was still screaming from the last song. He asked “Glasgow how’s it all going? It’s so great to be back. Thank you so much for coming to see me.” He played another song from his new record Hold Back Your Love. The lights went out again. It was another ballad, with an upbeat pace like Stereophonics’ Dakota.

Harry changed his guitar again and had a drink from his can. He played Unfinished Love with the crowd all clapping along. At the end Harry came to the front of the stage and had a solo moment with his guitar. I love a romantic song that is as powerful and up tempo as the White Lies do them.

“We are gonny play a song that we decided to do on this tour. But it’s a track we haven’t played in a long time. Maybe six or seven years. We decided to bring it back out because we know a lot of people love this track. It’s a song from our first album and it’s called The Price Of Love” said Harry. The crowd  screamed. The stage was enhanced with red lighting. The Price of Love was slow and calm and gradually built up into a frenzy, and Harry’s voice exploded into song. It was very big and grand by the end.  Charles on the bass really took over on the last section. 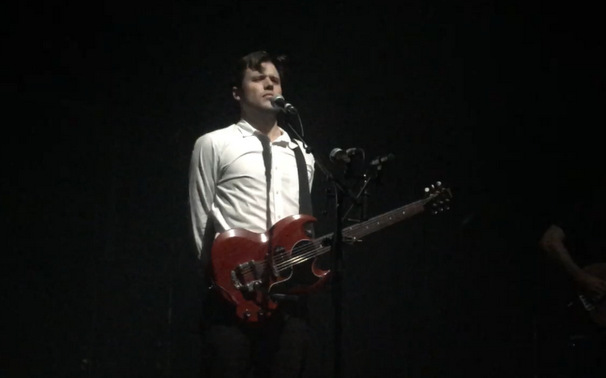 Farewell To The Fairground was next and the crowd started to sing out the tune.  Harry started punching his chest and throwing his arm upwards again. This song is about an escape from dark feelings. “There’s no place like home” Harry sang, and then he played his guitar gently so that the fans could sing the same line over and over again. These lyrics seem to be full of hope but in fact Charles admitted to The Independent that this line was meant to be sarcastic.

Morning In LA reminded me of Depeche Mode. It was sang loud then quiet to let the crowd take over parts. This was another new one from the album Friends. Harry then reverted to his shiny cream guitar and played Is My Love Enough before moving on to Unfinished Business. Charles told Q magazine that this song is about a boyfriend’s ghost trying to communicate with the girlfriend who murdered him and who has now taken to self harm. Big Tv follows, some of the keyboard playing reminded me of The Orb. It loosely tells a story of a girl, his friend leaving home, and him feeling envious.

White Lies  finished their set with Bigger Than Us, the first song from their album Ritual, with perfect dark to white lighting on stage and a massive sound to finish with. Harry clasped his hands in a prayer signal to the crowd then moved to pick up his can and toasted the crowd. White Lies were happy, we were happy what a show. 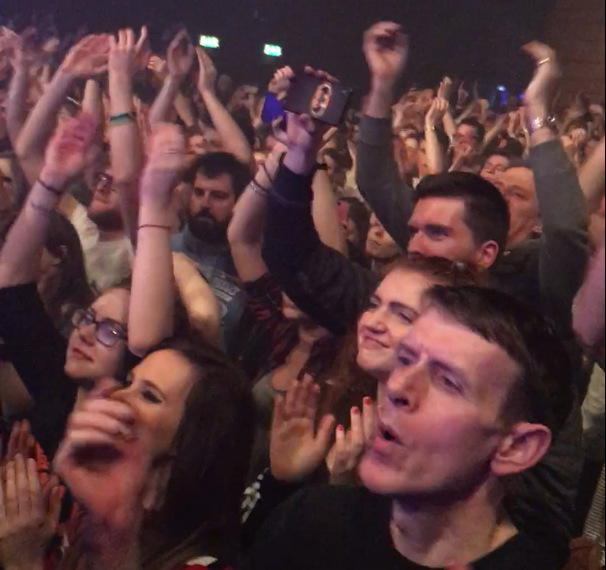 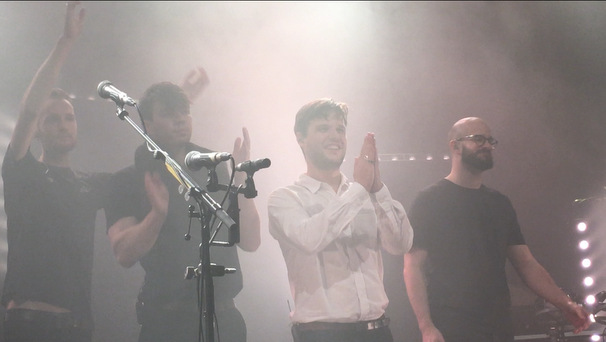