Despite having a ten year-plus history, I have only just discovered The Wave Pictures through their astonishing new album, The Bamboo Diner. Which is why I arrived excited but slightly apprehensive at the Brudenell Social Club. By the second song, I was sold. That second song had, not only an excellent guitar solo but two, yes two, bass solos from Franic Rozycki. This was clearly a band willing to shake up conventions and, thankfully, one with the musical chops to do it well. 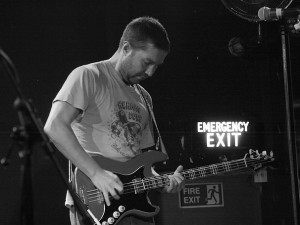 A trio; every part was clear and musical. The bass was fluid and continuously interesting, the drums were loose-limbed and malleable, the vocals were ever-audible and the sardonic lyrics present and riveting. But the guitar – that was what I was there for. As David Tattersall rocked back and forth on his heels, body otherwise rigid, his Telecaster spat out angular lines that brought Tom Verlaine to mind – effortlessly tuneful, developing or shredding. The sound was so simple; the stage almost bare. The guitar fed straight into a combi amp. No pedals, no effects. I’d have been happy with an evening of guitar solos but the quality of the songs made the package complete. Even the odd cover was quality. That second song? It was by Stanley Brinks, from Herman Dune. The encore? Let It Bleed by The Stones. 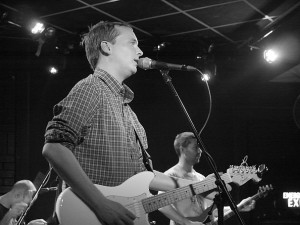 This is a literate band – they named an album (A Season In Hull) after Rimbaud’s “Un Saison En Enfer”. They quote Emily Dickinson (“hope is the thing with feathers”). Songs are sardonic, lovely, sad, wise. Very British attitudes alternate with vignettes of American life and the new, American-set album gets an airing alongside older favourites. An acapella song sees Jonny ‘Huddersfield’ Helm take the lead on a journey of poetic images. Another song sees him take a drum solo. Many songs see guitar or bass solos and, failing that, tight interplay.

The band chit-chat a bit with the crowd, many long-term fans, but mostly stick to business with a full ninety minutes of songs. Ninety minutes that passes like forty – a set with no dull patches. This is a band to treasure.