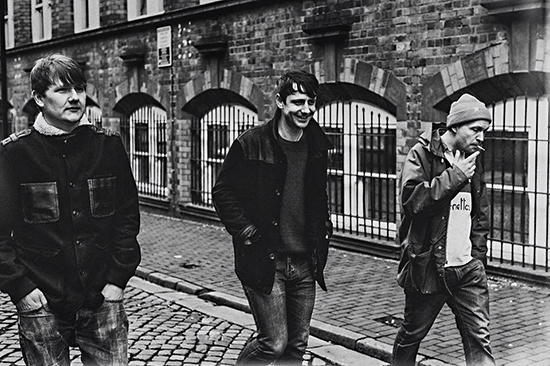 A lively night in Leeds for the brummy indie group, The Twang, with a crowd of all ages coming down to witness the band’s latest material before the official release of new album, NEONTWANG, on March 10th.  Their fourth studio album follows 2012’s 10.20.

The Cockpit is filled shoulder to shoulder, as The Twang take on the bigger of the two stages. Beers are being thrown, people on shoulders and the constant reverberation of the chant “Leeds, Leeds, Leeds” is being echoed around the venue.

But this doesn’t faze the Birmingham boys, as they get straight in with the first track of the night with the energy and passion that would have you believing this band was on its first rounds. Hooked with the Jarvis Cocker like unison of vocalist Martin Saunders, whilst engaged with the lyrical rhythm of Phil Etheridge, the combination is gripping.

The band plays through tracks from their new album, NEONTWANG, with stand out tracks being ‘Larry Lizard and ‘The Wobble’, that had fans reacting well with levels of applause. But it wasn’t until the Middle land lads struck out hits, ‘Either Way’ and ‘Barney Rubble’ that got the crowd in their element, with arms over shoulders and beers rise in salute. Seems The Twang are having a successful tour to unveil their new material, but all in all people were happy to see them touring again.