Can you use the word legendary too readily? In this case, NO. Since turning up for their Grammy nomination (!) in giant eyeball heads, the visual iconography of this band has become household knowledge. The Grammy nominated album, Eskimo, was almost devoid of music as we know it, largely made out of wind, snow, ice and animal noises. Atypical for the band, yet also typically weird. From re-inventions of George Gershwin to gory and sexy stories from the Bible to reworkings of James Brown to a trilogy about Mole-men, this has not been a normal trajectory. My personal favourite of this ever-puzzling sixty albums is their Commercial Album – 40 one-minute pieces each with one verse and one chorus. If you want a full song, they say, play it three times.

As much an art project as a band, not the least of the mysteries is “who ARE The Residents? Named after a package addressed to The Residents delivered to their home, their real identities have remained secret for nearly fifty years, hidden behind their elaborate costumes. Known for their elaborate sets and stage shows, they rarely tour outside capital cities and this is a very rare opportunity to see them out and about in the UK. 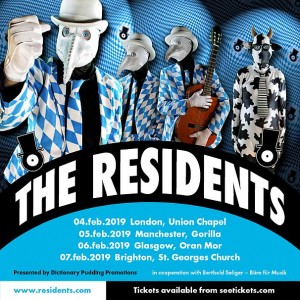