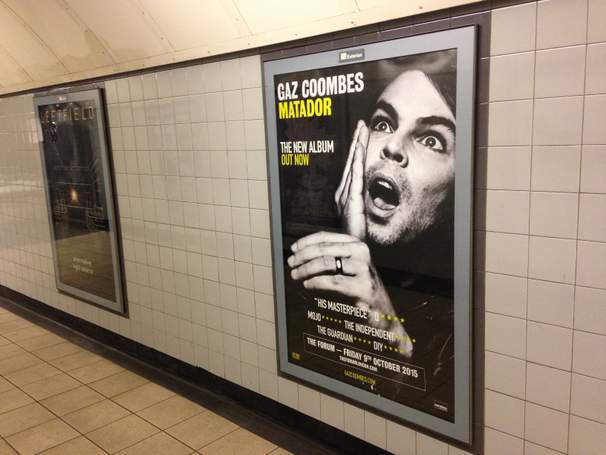 I am amazed at how much the 1990s (and late 80s) indie scene is continually regurgitated twenty plus years later. I’m not having a go at it, as such, but I just think its a fascinating phenomenon. It kind of really struck me a few years back, when standing on a London Underground I was propelled back into my university years by two posters. One was advertising an album from Gaz Coombes whose band Supergrass together with Oasis helped defined the evolutionary period between Steve Lemacq’s New Wave of New Wave bands in 92-93 and the emergent Britpop Epoque of 1995 onwards. The other poster was advertising Leftfield whose album Leftism was released at approximately the same time as Supergrass released theirs. Leftism wasn’t exactly indie, but it was alternative, a kind of avant-guard redoing of the thriving techno-trance scene. In any case I don’t seem to remember many bands trying to emulate the music of the 1970s in the 1990s. Then again I probably wasn’t aware of the 1970s music scene in the 1990s, so might have missed the influences. Difficult to say.

So where’s the evidence for this re-emergent 1990s scene? Well, all over the place really.

Just this week The Calls released the Lost Art of Romance, which was reminiscent of the days of  Madchester. The single might as well have been called Lost Art of the Stone Roses. It starts with a funky bassline, introduces a ice cool jangly guitar, its got really good energy, but the vocals are both soft, northern and an amalgam of Ian Brown and Tim Burgess.

And then in the last few weeks Ash and Embrace have released new singles, with new albums to follow. Ash started off pre-Britpop actually with Jack Names the Planets, which was quite rough and ready, before surfing the Britpop wave with a lighter pop sound. They’ve had remarkable staying power for a band that have quite a big following, but which never scaled the same heights once the Britpop bubble burst. They’ve just released a single called Buzzkill which sees them in the not unfamiliar territory of sounding a bit like a grungey Beach Boys. You know, Weezer, that kind of stuff.

Embrace meanwhile who always stick in my mind for their late 90s hit single Come Back To What You Know, a track which was barely but possibly just about indie although more post-Britpop Commercial Local Radio indie, are still treading the boards. They’ve released Never, not dissimilar to Snow Patrol’s Set The Fire to the Third Bar.

Ash and Embrace made it big. They’ve got mainstream pop sensibilities running through most of their music. Salad on other hand did not make it big, but they’re making a comeback anyway. They made a minor splash on Steve Lemacq’s debut year on the Evening Session in 1993 with art piece House in Kent. There was a hint of the Britpop in their music, but they were more in line with their pre-Britpop origins, with the snarling sarcastic and slow paced indie of The Auteurs. They were John the Baptist to Elastica. There was a bit of the shoegazer in them too. Later on in 1997 they released the awesome Terrible Day (which I don’t think I ever heard when it was released) which had the pace of a hedge-cutter, appropriate to the fizzy demands of the Britpop consumer. Now they’re back for a slight return. Their new single Being Human isn’t bad, its listenable. There’s still that old sarcasm in the lyrics.

And they’re not the only shoegazing influenced band to make a return. Ride are back in town, writing new stuff and touring. What’s fascinating is that all these come backs are, at least my knowledge, being made without a great deal of commercial success or hullaballoo. The Indie scene, the movement, the pedestal to which each band contributed, and which allowed each band to shine and mark their place in history no longer exists. They are then like dwarf stars, who play to a collapsing, ailing and physically degenerating fanbase. But at least, it would seem, they are doing it for the love (and, not, I would hope the money – although really who cares?).