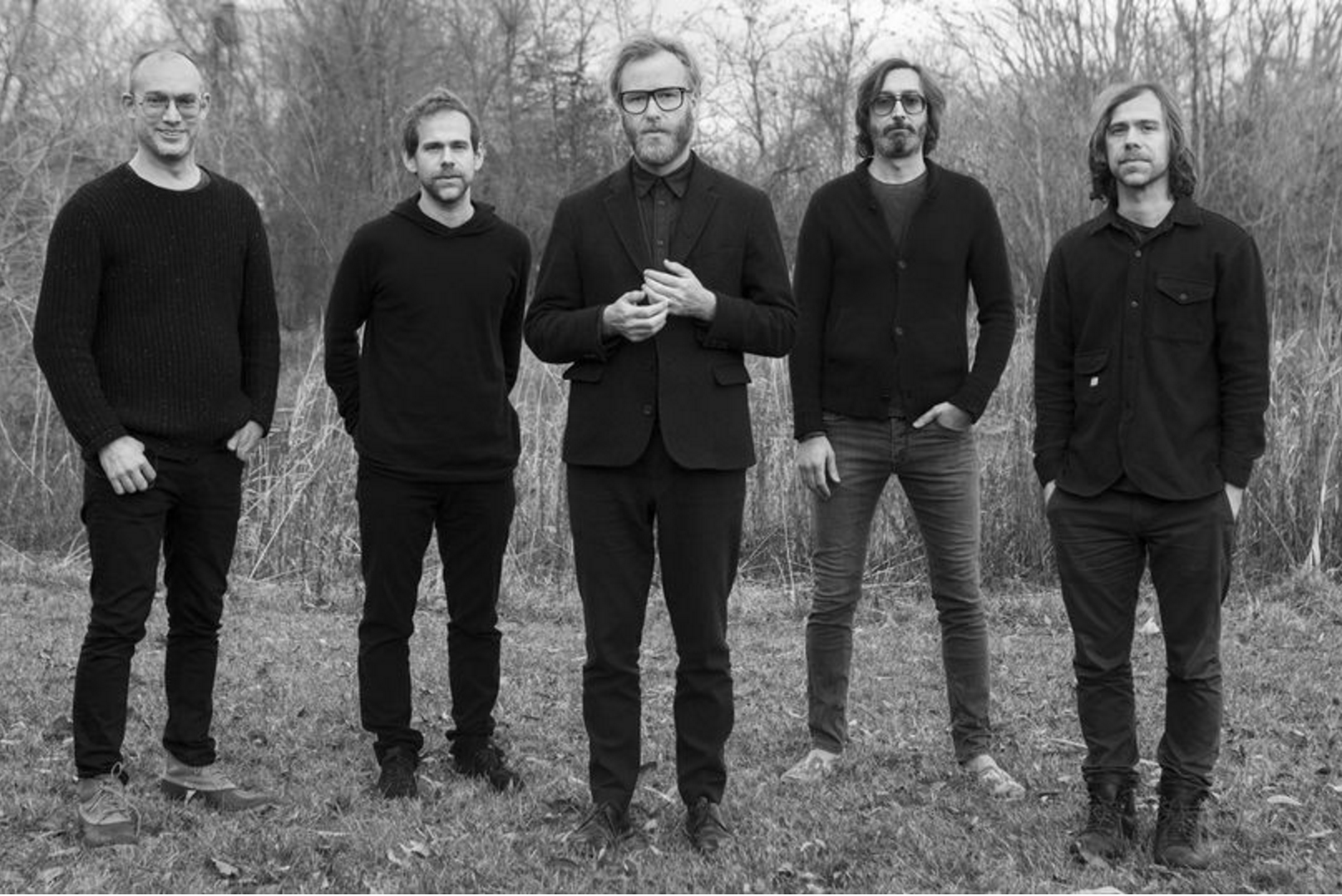 I was carried to Ohio in a swarm of bees

Who knew The National now actually had “hit” songs. Who knew massive crowd sing-alongs to The National even existed, let alone were possible. I have never quite experienced anything like it.

Like the vintage sight of Matt pouring himself a glass of wine, The National have only got better with time. From gracing many a headphone with soothing baritone, irony-laced, sad, melancholic and melodic musings, to selling out the biggest concert halls (I never thought I’d end up having to tout a ticket because of leisurely waking up an hour too late to find tickets were sold out…) and becoming Indie Rock’s darlings and now on the cusp of headlining major festivals (trust me on this), their rise has been well-documented – and well deserved – and getting to see them at Manchester’s O2 Apollo allowed for a glimpse into their handling of it all. Because if 2007’s Boxer was their critical breakthrough, 2010’s High Violet their commercial “wider-audience” breakthrough, then 2013’s Trouble Will Find Me further cemented their place as everyone’s new favourite Indie Rock band. With most of those albums receiving rave reviews, the pressure was on to deliver yet another stellar album.

Their latest effort, 2017’s Sleep Well Beast, was described by many as their heaviest to date, with angular noises, riffs and actual guitar solos, but underlying it throughout is a soft underbelly of piano, laying the foundation for one of their most subtle works yet. However, although they have most definitely learnt and evolved as a band and even embraced their newfound position, ultimately, they really haven’t done much to alter their formula: rather, it seems like dogged persistence has just finally led them to a wider audience who’ve slowly come to embrace their slow, thoughtful style and wittily self-depreciative lyricism. The new songs bear all the hallmarks of classic National songs with the interplay of the Dessner brothers’ guitars and piano, Scott Devendorf’s driving bass and the dark swagger of Matt’s voice tied together by Bryan Devendorf’s rolling drum rhythms. But a strong twinkling of piano has come to permeate their songs and a smattering of guitar solos – even duelling brothers! – to add more oomph and, dare I say it, sexiness, or to use a less disturbing word, flair. Without mentioning Matt’s stage presence as he readily stalks the stage, in and about, out and around, leaning, crouching, screaming, slow dancing his arms about as he lilts his new songs into the mic, eyes closed, lullabying the enraptured crowd into blissful dreamland.

‘Tis in such a fashion that he began the night with new album opener “Nobody Else Will Be There” easing the crowd in before launching straight into what may well be their most upbeat song to date, to which I, for one, can’t help but groove and sway along to – which is called “dancing” (dancing to The National, who’d have thought!) – with lead single “The System Only Dreams in Total Darkness” complete with that new jagged guitar sound and first proper, uplifting solo of the night from Aaron Dessner as Matt almost ironically repeats: I can’t explain it, any other way.

With that quick one-two of differing The National styles and vibes, the stage was set and they continued with their latest LP with “Walk It Back”, complete with atypical electronic intro before Matt’s deep vocals return the track to familiar territory. As the speech segment comes on, Matt starts stalking around the stage, circling behind the drum kit and getting into the mood as he sings familiar themes of don’t want to fuck it up. No danger there Matt. They follow up with the popular “Guilty Party” that slowly builds like many of their songs, progressively, drumbeat increasing in intensity and complexity and the indispensable horn section adding just the right touch of magic to the song, à la The National, as the song grows but then steadies itself before the expectant end, a feature typical of the last album as they tamper and play with the expected but inexistent explosion present on previous offerings.

They break the succession of new songs with “Don’t Swallow the Cap” off High Violet which, with its quick rolling rhythm, hopeful lyrics and bonus Dessner guitar outro bravado providing the perfect platform for one of the night’s biggest highlights in the increasingly adored “Bloodbuzz Ohio”.
I’d never imagined I would get to hear thousands of people sing The National lyrics together in harmony and what a most stunning thing it was to both belt out those lyrics with all one’s heart and vigour and also be a part of and bathe in: a moment to close one’s eyes and marvel at how far The National have come from their early days. It’s safe to say the older songs drew a few more sing-alongs – yes, there were more! – with “Afraid of Everyone” continuing the wonderful trend

I don’t have the drugs to sort it out

before it was back to new territory with the pleading rosy-sounding “Empire Line”, before a rip-roaring – I cannot skip the chance to use that word to describe a National song – rendition of their heaviest song to date, “Turtleneck”, as Matt writhed and contorted himself into all sorts of anguished cries and screams, to the obvious delight of the crowd who, may I say it, impressively responded to every bated offering of adulation such as the above or Aaron and Bryce’s forays to the edge of the stage.

Although the list is growing, the number of songs that could be labelled “hits” by The National is relatively short, but amongst them is an unlikely yet characteristic song in the wistful “I Need My Girl” which had all the couples lovingly cuddling up. They backed it up with the lilting guitar slides of “This Is The Last Time”, remorseful lyrics and quiet tone prompting the crowd to make themselves heard. The National then returned to their roots somewhat with one of only 3 songs from seminal album Boxer with “Apartment Story” that they appropriately dedicated to a certain Bernie who’d hosted them on her floor in Manchester during previous visits. The warm fuzzy blue and rose-coloured light-show – which was excellent throughout – adequately mirrored the lyrics in conveying the warm cosiness of being nestled in a sofa at home with loved ones (a most welcome change and remedy to my incessant mumbling of that very song as I waited outside in the cold beforehand). We’d have gladly stayed in the cosy Apollo until way past curfew.

Stay inside our rosy-minded fuzz, for days

They continued with a few rare gems starting with the tour debut of “Hard to Find”, one of the quietest songs of the evening that silenced the room to a gentle hush as we were further cradled in the warm lush tones of the piano coupled with Matt’s baritone. They followed that with the double High Violet whammy of “Lemonworld” with its cooing “doo doo” echoing around the room in mingled opposition with the preceding lines of dying in a lemonworld. In this respect, The National have a certain gift in suffusing many of their songs with undertones and murmurs of hope despite the palpable darkness, as evidenced here on “Lemonworld” or with the subtle trumpets of “Guilty Party”, that offset Matt’s feelings of uselessness with lines such as Nothing I change changes anything in “Walk It Back”, or this song’s And I’ll try to find something on this thing that means nothing enough.
The biggest surprise came next with “Conversation 16” featuring the beautifully bizarre eargasm of hundreds of people belting out the bridge

I was afraid I’d eat your brains, cause I’m evil.

They returned to pastures new with the soft and stunning “Carin at the Liquor Store”, a ballad to rival any of their work as a tranquil hush descended on the audience who bathed in such still elegance and gracefully demonstrated the band’s new status as every ear was tuned in and attentive, every mouth muted, and everyone’s gaze, will and mind enraptured and riveted. It’s a foregone conclusion nowadays.

The yearningly hopeful notes of their ode to this country rang out to huge cheers as “England” grew and grew in energy and life before culminating in the stalling bittersweet outro capped by Matt’s desperate longing to push the night away. The art of raising and lowering the mood and tempo seemed to be second nature to them as another swaying rhythm on the toms signals the upbeat sound of “Day I Die”, the opening arrogant lines recalling “All the Wine”, before the end of the chorus brings with it that exuberant and wackily happy guitar riff to which we gleefully (stupidly) sang along with.
One of the biggest cheers of the night is reserved for a Boxer classic as the opening piano lines of “Fake Empire” are drowned out but then the noise is returned in kind when the horn section work their magic with aplomb to an overwhelmed audience thunderously applauding the performance as the band wander off for a short break.

I ecstatically ramble on about how many and which potential songs they could play for the encore before they throw my erratically yet thoughtful propositions out of the window with another new song in “Born to Beg” with its gentle electronic hum coupled with piano building into that limbo state of catharsis that they’ve perfect on Sleep Well Beast. They then brought out the acoustic guitar for an oldie and fan favourite “Slow Show” before delving even deeper into their back catalogue for their only pre-Boxer song and live show staple from 2005’s Alligator: “Mr November”. There was a wonderful irony during the song’s quieter bridge in hearing Matt singing of being carried in the arms of cheerleaders as I saw one lucky soul crowdsurfing over the barrier into the waiting arms of the security personnel, before Matt exploded at every corner of the stage, as every repetitive and louder chiasmic cry brought his yearning and hopeful words closer to reality:

Lullabies and gnarly guitar solos, soft piano ballads, lead singer chucking glasses to the balcony, soft deep singing and throat-wrenching scream, we’ve been pulled every which wonderful way.
They had time for one last song and amongst a wealth of options opted for “Terrible Love” as its ragged opening guitar rang out and echoed in the lovely, expectant and satisfied air of the Apollo. The song lingers through its first verses and chorus until the urgent guitar riff starts the slow crescendo, followed shortly by Matt’s baring admission to needing help to sleep is joined by the rush the quickening hi-hat hits that add to the nervous anxiousness. There is a lull as Matt sings about trying not to break, playing with our heartstrings and toying with our emotional lilt, before the song enters its final climactic pull leaving us with us drenched and soaked and bathed in the last of Matt’s words and sweet aftermath of the storm we’ve just weathered, a cleansing and cathartic storm of emotions.

It takes an ocean not to break