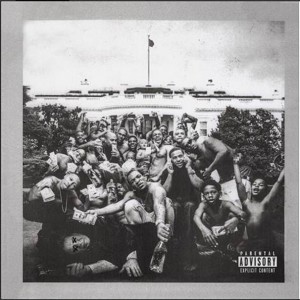 There have been a handful of moments throughout musical history when a record is released so important that it transcends genre, taste and loyalty, and simply becomes required listening. Kendrick Lamar last week served up one of those moments with the release of his 3rd full-length album, To Pimp a Butterfly.

With his 2011 debut Section.80, Lamar laid his cards on the table with a powerful album that dealt with social issues, drugs, sex and race, but also showcased his ability to sensitively discuss these topics with sharp lyrics, skilful flow and catchy hooks. He followed this up with 2011’s good kid, m.A.A.d. city, a concept album which proved Lamar was a remarkable storyteller and, while undeniably hip-hop in its sound, made no attempt to cater to the braggadocio and swagger that the bling-bling era of rap has all-too-long demanded. It was becoming apparent that Lamar was no flash-in-the-pan, and fans eagerly awaited his next release.

The album arrived a week ahead of schedule, a decision that wasn’t happily received by Lamar’s label boss at Top Dawg Entertainment. However, when it came, it was evident that we had something special on our hands. On To Pimp a Butterfly, one of those glorious moments has occurred when the right artist and the right production team have come together during exactly the right social climate to make something truly great. In Kendrick Lamar, we have a rapper dripping in confidence who flows like water over every beat on the record. And what beats they are. Lamar has stated that, ‘Every producer I’ve ever met was sending me stuff – but there was a one-in-a-million chance you could send us a beat that actually fit what we were doing’, and this is no wonder as nobody could have predicted the sound of this album. To Pimp a Butterfly pulls from jazz, soul, funk, boom-bap and classic hip-hop to create instrumentals that sound nothing like any rap being made today. The features list is long, classy and impressive, including Bilal, George Clinton, Snoop Dogg, Lalah Hathaway, Thundercat and Robert Grasper. Production comes from TDE in-house Sounwave, Flying Lotus, Boi-1da, Pharrell and more and, sonically, this album is dense, complex and beautiful, to the point that an instrumental version alone would be well worth a listen.

Luckily however, Lamar has provided lyrics to the soundscape and we find him angrier, more introspective and more socially-aware than ever before. After a year in which what it means to be black in America was examined more than it arguably has been since the civil rights movement, Kendrick Lamar arrived with an album that is defiantly and proudly black, even though his suggestion that ‘2015 niggas [are] tired of playing victim’ has angered a few within the black community. There are some beautiful lyrical moments here, whether when comparing the gang scene of his hometown Compton to Congress – ‘Ain’t nothin’ new but a flu of DemoCrips and ReBloodlicans/Red State versus a blue state which one you governin’ – on Hood Politics or on u, the dark counterpart to lead single i where Lamar examines how fame and success have changed him, in this case for the worse, even leading him to ‘Facetime instead of a hospital visit’ leading a friend to die before he found the time. It’s a tough listen, but nowhere does Lamar sound hungrier or more violently passionate than on Blacker the Berry, the Boi-1da produced Lalah Hathaway-featuring track, where Lamar continues the themes brought up on Kanye West’s New Slaves – ‘I mean it’s evident that I’m irrelevant to society/That’s what you’re telling me, penitentiary would only hire me’ – and pondering the hypocrisy of the 2014 post-Ferguson riots across America – ‘So why did I weep when Trayvon Martin was in the street?/When gang-banging make me kill a nigga blacker than me?/Hypocrite!’

But it’s on the 12-minute album closer Mortal Man that this whole album comes together, and everything that has gone before it makes sense. On a track inspired by and written on a trip that Lamar took to South Africa, he compares himself to Nelson Mandela, JFK, Moses, Jesse Jackson and Michael Jackson, and asks if ‘when shit hits the fan is you still a fan’ or will he end up being betrayed just as they were. The track closes with the full recital of a poem that has been restarted and added to throughout the album, before the revelation that this poem has, in fact, been written for and delivered to Tupac Shakur. This leads into an interview between Lamar and Shakur, cut from an un-released 1994 interview with a Swedish journalist, which ends up being a poignant discussion between the pair as Lamar seeks answers and clarity from his hero. In any other hands this would surely be tacky and glib, but the fact that it absolutely works in the context of this album is further proof, if more were needed, that in Kendrick Lamar we have one of the most exciting and important voices in music today. The comparisons between Lamar and OutKast’s Andre 3000 remain – in fact, there is an OutKast feel to a lot of this record – and when he produces music this enthralling, the worry is that he will go the same way and reduce his output dramatically. One can only hope that this isn’t the case but, when albums appear that are as important as this, you have to enjoy them for what they are. If it turned out one day that this was the last we ever heard of Kendrick Lamar, this writer for one would be able to make peace with it. This is the most important rap album of a generation.

Kendrick Lamar, To Pimp a Butterfly