It’s a little known secret that Buzz (King Buzzo) Osbourne keeps three session musicians up his baggy top – how else can the Melvins’ sound be explained? Crushingly riffing, monstrously large, ear-pummellingly loud; this is not the sound a three-piece makes. A packed and sold-out house was largely shocked into rigid awe; occasional onlookers writhed or shook their heads in pain. 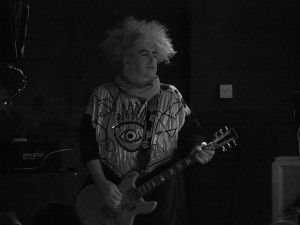 After a late start to allow footy obsessives to watch England bore Slovakia into a nil-nil draw, the band played an almost non-stop eighty minutes with scarcely a word, barring a withering: “How was the football?”; “How exciting” from Dale. Dale Crover is a long-term member of the band that likes to play rotating line-ups and band size. His drumming is astonishing – frantic, precise, furious and powerful. I counted more than a few drum solos. But then, this band isn’t afraid to mess with expectations. The set opens on discord, thrubs, bangs, scratchy guitar, feedback, shaking the air until it resolves into a song. 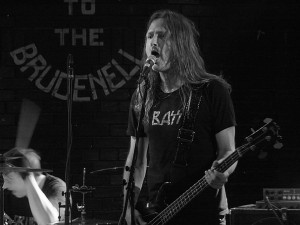 Steve McDonald from Redd Kross holds down the bass post for now (the band celebrated their changes recently with an album featuring six different bassists. Just as Dale wore a “drums” T-shirt, Steve has a “bass” one. He throws his guitar around, waving his hair and throwing his lanky body around. His bass solos are slow and full of poses. Meanwhile Buzzo is constantly assaulting his guitar, throwing off sparky little solos or just noises, full of invention. 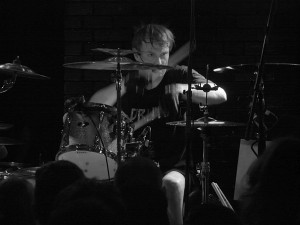 The Melvins covered their gamut of material, excepting, perhaps the very sludgiest moments of the back catalogue and I didn’t recognise one of the tunes. I didn’t care – I was happy to stand there, being shaken by the sound and thrilling, not just in the volume, but in the sound of three musicians, wonderfully amplified, playing together as one, whilst each distinct and clear. The set was rhythmically diverse, dropping into different grooves – some metallic, some grungy, some sludgy, some a mystic slow funk, some racing in a crunchy way – mind-melting. Unifying it was the scratchy guitar attack and manic hair of Sideshow Buzzo, the Muppet’s Beaker grown solid. 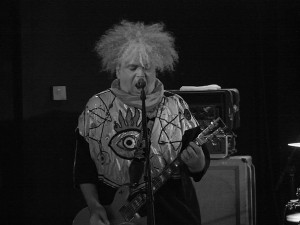 Once a band best known for influencing Nirvana, the Melvins now attract attention for ploughing their own relentless path for thirty years, never deviating from their hymns of heaviness and never seeking popularity except on their own terms. That’s why tonight saw people from Newcastle, Sheffield and other Northern towns schlepping over to Leeds to worship at the feet of the shock-headed monolith that is King Buzzo. 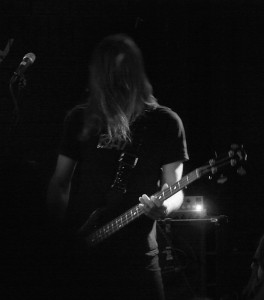 2 thoughts on “The Melvins – Tearing the walls off at The Brudenell, Leeds”