It’s hard to know if a gig you’ve seen is typical of the band. Some bands are famous for having “on” nights and “off” nights. Perhaps it was the packed venue (a large living room), performing in front of a huge glass window open to the street, or perhaps it was near the end of a long tour. Or maybe it was the recent signing to Sire Records, home of many legends. Whatever it was, this was pure fun – fantastic pop, touching songs and a non-stop stream of banter and self-deprecating jokes from Thomas Rylance, the front man. It was practically a comedy gig as Rylance took the P out of the band, the audience and, mostly, himself. An unassuming figure, blessed with a less than rock-star looks, he won the crowd over by force of personality and a stream of quality laughs. 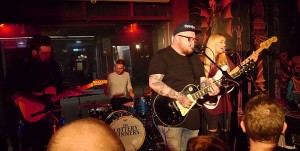 With the band reminding me of clever mainstream pop like The Beautiful South or Pulp and Rylance reminding me of Paul O’Grady working with Peter Kaye’s better moments, this was an hour of fun. Our Michael Moore lookalike has a stack of cracking pop songs – soppy mainstream sentiments but self-aware: “I know it’s a Whitney Houston chorus”, he says of I Will Always Love You. These lovely songs have great colour from the lead guitarist with excellent fills and runs. Meanwhile the bassist provides solid quality and the drummer, alternating between expressions of joy and mild irritation, keeps it all moving nicely. Songs are full of feeling, musically and lyrically, addressing all sorts of love lost and found. Rylance is clearly very proud of them and the band have seven years of slog behind them, polishing their work. 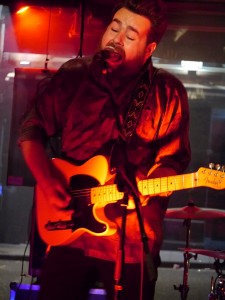 It takes some confidence to play cover versions and lay them alongside your own material but the band play It Must Be Love, following their support slot with Madness and There Is A Light That Never Goes Out, since Rylance has said that The Smiths are his idols. Cleverly, they move straight into their own song, There Is A Boy And He Never Goes Out. The rest of the band have exchanged knowing winks and chat as their front-man does a solo spot. Rylance is by now pushing their home burnt CDs on the merchandise table – “since my dad burnt 350 of these, I had to promise to advertise his DVDs. Anything you want, all the latest films, even (whisper) blueys. They call him Dirty Colin”. 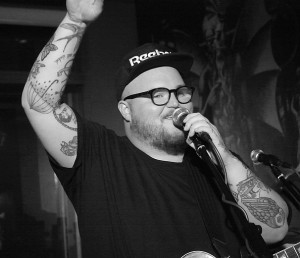 With songs like this, confidence and a special sort of Wigan humour, it can’t be too long before The Lottery Winners earn a place as beloved Northern songsters and their chirpy tunes blanket Radio 2. Roll on that day, they’ve earned it. 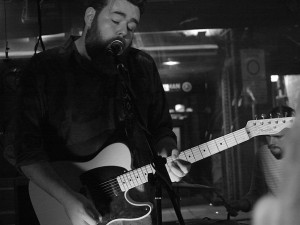 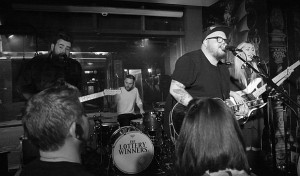