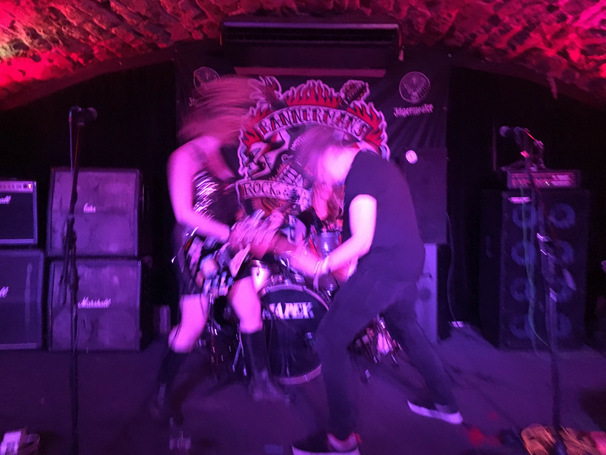 The Kut are a London all girl trio playing alternative rock on the grunge scene. I had a quick chat with them before their gig and afterwards had longer interviewing them. The girls are very passionate about their music and where they want to be in the music scene. They are looking to work with a bigger label, hopefully Criminal Records will make that happen.

It’s so refreshing to see how hard working these girls are. This is a massive tour they are doing with another 23 gigs after tonight.

Princess Maha has bleached yellow hair with overgrown roots. She was both feisty and gorgeous. Drummer Diana Bartmann, had bobbed length blonde hair, she was fierce. Bass guitarist Hannah Cooper had nothing but eyeliner on, but sported the best haircut, shaking it out on stage.

The lighting was purple and pinks making the girls look magical. Flashes of red and green would come down from the ceiling.

Princess Maha, with a beer, a water and her very in the now e-cig rocked out the first song. She moves from husky, to gnarly and sometimes soft, while firing out amazing riffs. She, along with bass guitarist Hannah, constantly jumps up and down the stage.

Second song Dma really got the crowd in full swing.  No Trace had an emo vibe.

The band encouraged people at the back of the gig to come closer. Princess Maha said ‘I can’t see you’, Hannah was like ‘We don’t bite!’ Princess piped in ‘much……unless we really like you’. The Kut are the nicest badass band. They then played a new track If Looks Could Kill. The crowd went into a frenzy.

Princess got everyone singing the chorus to Bad Man. They finished with Hollywood Rock And Roll. The crowd, putty in the band’s hands, didn’t want to leave. 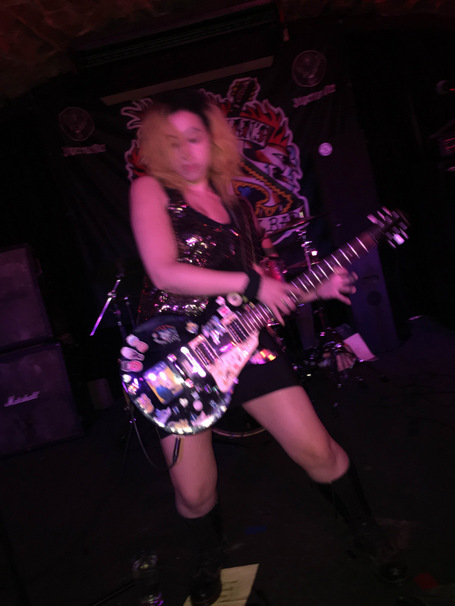 Their music isn’t everyone’s cup of tea but as I watched there was not a soul in the audience that could keep still. From young ones blasting out moves and head banging to middle aged fans stamping their feet.

These girls played new and old tracks and I’m positive they acquired new fans as a result.

After the gig I managed to get a bit of time talking to them.

That’s two nights played back to back in Scotland how do you compare the two?

“Both nights have been amazing for different reasons. In Glasgow we nearly blew the floor away some of our fans said. Tonight’s full set was amazing and was great conversing with our fans before and after”.

I’ve seen you’v been described as the bastard love child of Courtney Love and Marilyn Manson by Metal Hammer?

All three girls laugh together. Princess Maha remembers reading that in a copy of Metal Hammer that they picked up at a petrol station on their way to a gig. She says, “We opened it up and we were like woah that’s really cool as we love both of those bands. It was more the chaotic live shows that we didn’t understand. Some of us weren’t sure as it makes us sound a bit heavier than what we are”.

You were voted into the winning spots in the MTV brand new unsigned pool in 2014 tell me about that?

“That was honestly mind blowing because there was so many acts in it. We just asked everyone can you vote for us and support us. Then when it actually came to it and we were in the winning final it was a massive deal to us. It gave us the momentum to actually kick off something and get out there.”

You’ve played at such as Camden Rocks and Glastonbudget, what was the response you got?

“Camden Rocks was a really good festival. To be honest we were a bit too early on the bill considering we are from London but it was still amazing. Everyone surprised us by being out at 12 noon and it was busy. So it was great to know we could get an audience of fans to watch us early on. Glastonbudget was great as they’ve put us on there a couple of years now. Rebellion is the most recent one that we have done. I have to say that when we got to play I was looking around you know when you look around to see if you can recognise anyone. I could see it was all fans from different festivals we’ve played at Strummercamp, Glastonbudget, Camden Rocks all dotted together it was like woah so amazing and they were all connected in the same way. Hannah added they were all wearing The Kut tshirts. Princess was like oh yeah a lot were wearing our t shirts and we were running a little late. Apparently the people doing the stage were going up to people in The Kut t-shirts and asking are you in the band. They were like no no no we are just fans. Stage crew were like don’t worry they are on their way. We always go to our shows we were just a few minutes late for this one. People made cover stories from it as well saying oh yeah we’ve just seen them.”

From Poisonest in 2005, which later got deleted, to your latest Rock Paper Scissors has there been any musical changes?

“That’s great you know about that. Poisonest was an ep that we put out then deleted as we weren’t happy with how it sounded. It didn’t represent where we were at. It did sell all the copies but we didn’t wanna reprint it. Our thoughts were to revisit it later if we wanted too. We’ve definitely changed a lot from that time. Over the years we have changed our sound but it’s always had a similar feel. Some of those tracks we do still play.  Even I don’t own a copy of Poisonest.”

Okay girls I’m a hair designer to trade and today before your gig I was talking of you and saying how great your music is to a client’s son. He was like yeah I know them we follow each other on Twitter. I’ve to let you know his favourite song is Make Up.

“Make Up was a really emotional track for us. A lot of it was written about frustration in the music industry, so was Mario and a lot of others on that ep. I felt like I was pushing on something and just hitting my head on a brick wall. It had been about the previous couple of years where basically we were promised this whole Warner deal. We were waiting for them to sign us to be bigger, then they were like oh you’re inactive but we were like we were waiting on you to do something. We had an American manager at the time and he had shipped us out there. Next thing we thought we will wait and see what happens with the label and do recordings with our budget and have it in a way we would want to it. So we were hanging on. They were like yeah we really wanna see these girls live with their really strong sounds. And by the time we were chasing them again Warner said about us being inactive. So we had to start again. It really hit home and we thought well why are we sitting around waiting for this label deal. What’s so special that they can do that and we can’t? It’s actually just getting out there and being active. So that’s what we have been doing ever since.”

How do you prepare yourselves for a gig?

“We always eat loads of burgers like we did today.” Everyone giggles. Princess continues well it has been lately, “Although jumping around onstage I could feel that burger weighing me down.”

I’m like, “Oooffft another 23 burgers to go then girls?”

How did you all come together?

Princess knew the two girls with being at music college and another person that knows them and we all connected together through the course.

I know you girls use social media to your advantage. What do you think of free downloaded music?

Who writes the songs?

Princess Maha comes up with the magic.

Any family influences on your musical talent?

All three girls parents pushed piano on them all. Dianna was more influenced in the classical route she can play guitar too but always loved the drumming to pop/rock. Princess Maha was always made to sing in the family hotel and played several instruments, loving the guitar.

What are your dreams and goals? 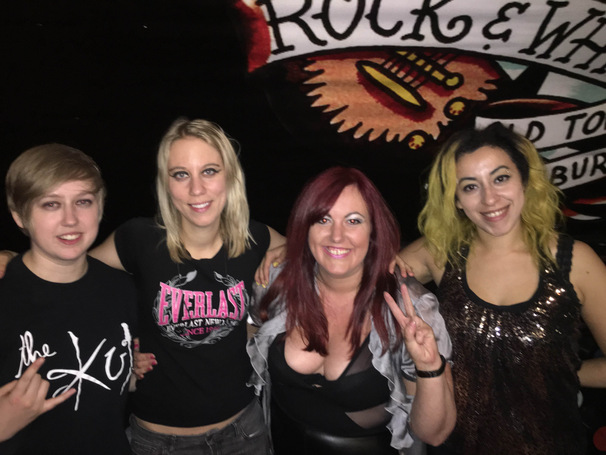