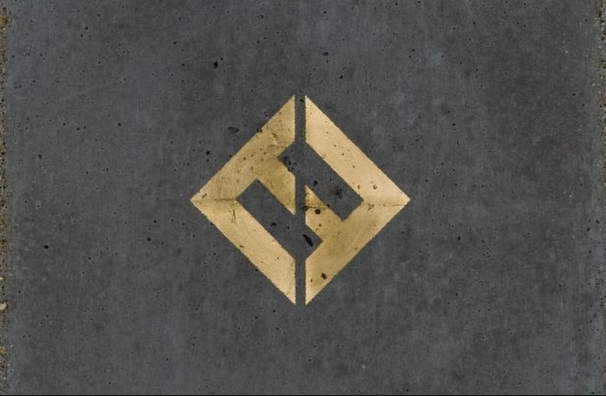 I was really hopeful about the Foo Fighters when they came into view in the summer of 1995, I thought any spin-off of Nirvana was worth a listen. And yet the name ‘Foo Fighters’ rang alarm bells. The name sounded a bit naff. Too comic, too straight forward, too empty. Its the kind of name I’d expect to appeal to a young child drugged on glucose and E-numbers. Their first single ‘This is a Call’ was OK, but it wasn’t rough, it wasn’t edgy, it didn’t take you to a special or new place, it was just well packaged, and felt a bit ironic. It ended up as high grade indie disco polyfilla. Over the years my mind has glazed over whenever I heard mention of the band. Having said this Dave Grohl seemed an affable man and I can’t help admire the sticking power of the band.

Its been twenty plus years now and Foo Fighters are still up there. Through this time they’ve barely registered with me musically (part of this is because I don’t get out much!), thought there was one moment, back in 2009, when I did sit up. I found the video to The Pretender, and for the first time I felt something sincere and vital. The Pretender is probably what I’d expect of a song called ‘This is a Call’ a call to arms so to speak. The video has a line full of military police lined up against the band. The line of police charge the band and whilst they’re in full march a red storm hits them and they wilt under its power. Very humanitarian, the red storm is very socialist, and it felt relevant to me given that it came a few years after a personal experience of having been kettled and therefore punished by the police for being at a gathering that wanted to make its views known about the UK’s corrupted financial system in 2007.  And yet are an internationally famous rock band really touting socialism? I don’t know, but it is in the financial interests of international rock stars who have untold wealth, some of which has been ferreted off into tax havens, that the military police are deployed. So The Pretender was the quintessence of fury at the capitalist-state-police hegemony, but how sincere were the band about the message, how much did they mean it, how much did they care?

The new album from Foo Fighters ‘Concrete and Gold’ kicks in at song two, ‘We Run’ is a rollocking galloping ride. Two tracks on and there’s an equally impressive energy in ‘The Sky is a Neighbourhood’. Grohl puts on a hoarse voice and he heaves out a rough old banging verse, with big ponderous drums and it all gets topped off with a choral chorus. I’m hearing the Pixies, that happens several times throughout the album. In the next track, ‘La Dee Da’ there’s plenty of heavy guitar, lots of industrial sounds wedded into the track and a variety of buzzing beat schemes, to keep your mind interested.

The thing about Foo Fighters is that I’ve never really been touched by Grohl’s lyrics, and that continued with this album. I can’t work out what Grohl is singing about, and my mind doesn’t even find itself trying. Sometimes I loose consciousness. Sometimes Grohl’s voice feels like some kind of distorted percussion instrument, the track an instrumental. In this way the Foos remind me of Black Rebel Motorcycle Club. Tonnes of songs, well crafted, but vocals smudged into a fuzzy rock sound, can you actually remember any of them? Do you care to remember any of them?

Midway through the album ‘Dirty Water’ appears, its very Stereolabby, with a repetitive chord structure, melancholic lyrics, harmonised sighing and flowering chorus. I really didn’t see that coming. Weird eh, but what I’m picking up is that with this album the band are determined to take different directions. It really is a chocolate box, the Foos being the chocolate, and then all kinds of hints and flavours embedded in the tracks. Aerosmith, Weezer, Cliff Richards and Elton John from the 70s, the Red Hot Chilli Peppers, Pixies of course, and ahem, Stereolab.

The thing is and the thing that always saves the day is that Grohl is the master of the explosive chorus. You always end up with this feeling like you’re running on razors. It’s difficult to dislike, difficult not to feel a bit lifted, elevated by that buzzy rock sound, and those nasal American rock cries, Grohl’s pained survivor, fighter voice. Even with ‘Dirty Water’ the Foo’s show their weakness for a rocking chorus, and this Stereolab like track mutates into something vaguely reminiscent of a MSTRKRFT blockbuster. If Grohl started off singing like Laetitia Sadier at the beginning he’s reverted to type by the end.

From the days of ‘This is a Call’ I felt that the Foos were determined to keep the spirit of grunge alive. But it has always been and continues to be a a neatly packaged and formulated grunge, one that is not interlaced with poetic genius, one that lacks the snarling snapping and the unpredictability. I’ve always kind of had this sneaking feeling that whilst Grohl was the drummer in Nirvana he’s the wrong person to be barking up the grunge tree, he’s not a looser, he’s always struck me as someone who’s doing OK who finds a way to overcome, maybe he should try a different avenue, and yet he consistently goes down angry avenue and painful park road. But then the Foos never have done raw grunge. They seem to be in the business of staging an operatic parody of grunge, perhaps given all the influences detectable, one could say a variety show parody, done on a grand scale. Foos write for stadiums, and fair play they fill them. Its always a pulsating rock sound. It’s so well packaged so well produced, it’s a quality experience. It always is. I want to love it, its so catchy, but I don’t really know what any of it means.

Surprisingly, and this album is one big surprise, the album slows down towards the end, as if the batteries are running out, the numbers are slower and the lung grating choruses give way to smoother more melodic attempts. We arrive at the last track, the slothful ‘Concrete and Gold’, which is like listening to the mournful reminiscence of a lumbering, a Brontosaurus, on its last legs.

Concrete and Gold by The Foo Fighters was released on September 15th, 2017.