After three years of no Trees, the festival finally came back better than ever last week. Winner of ‘Best Medium Festival’ at the UK Festival Awards 2018 and appreciated by everyone who’s ever been – from Kerrang! Magazine to Frank Turner, 2000Trees is a fantastic festival in every aspect. It’s in a beautiful part of the country, it was created by a group of friends and therefore has a wonderful sense of community, the food is amazing, but even more importantly: the lineup is always good.

Trying to find female artists on lineups of other festivals (let’s not name names today) has been a yearly struggle. This absolutely cannot be said for 2000Trees. Although amazing bands and artists of all gender identities performed this year, this is a highlight of some of the female and non-binary artists that rocked the festival.

Marisa and the Moths were one of the first bands to take on the Neu Stage on Thursday morning and set the bar really high for the rest of the day. Combining heavy sounds with beautiful melodies, the Reading rockers charmed the crowd with bangers such as How Did You Get So Weak? and got everyone ready for an incredible day of music.

This article wouldn’t be complete without Em Lodge, bassist of Delaire the Liar, who also plays bass for Bleak Soul. Both bands played on Thursday (on the Axiom and Forest stages) and they both did incredibly well. Delaire the Liar were one of the first bands of the weekend to give a big “Fuck You” to the Supreme Court of the US, the Conservative Party and Boris Johnson. This was a very common message during the festival, but the news about Boris Johnson retiring came out right after their set (at least, with below average festival phone service) so it just felt more powerful. Big shoutout to Em for not only playing two shows, but also doing an incredible job. Truly an icon! 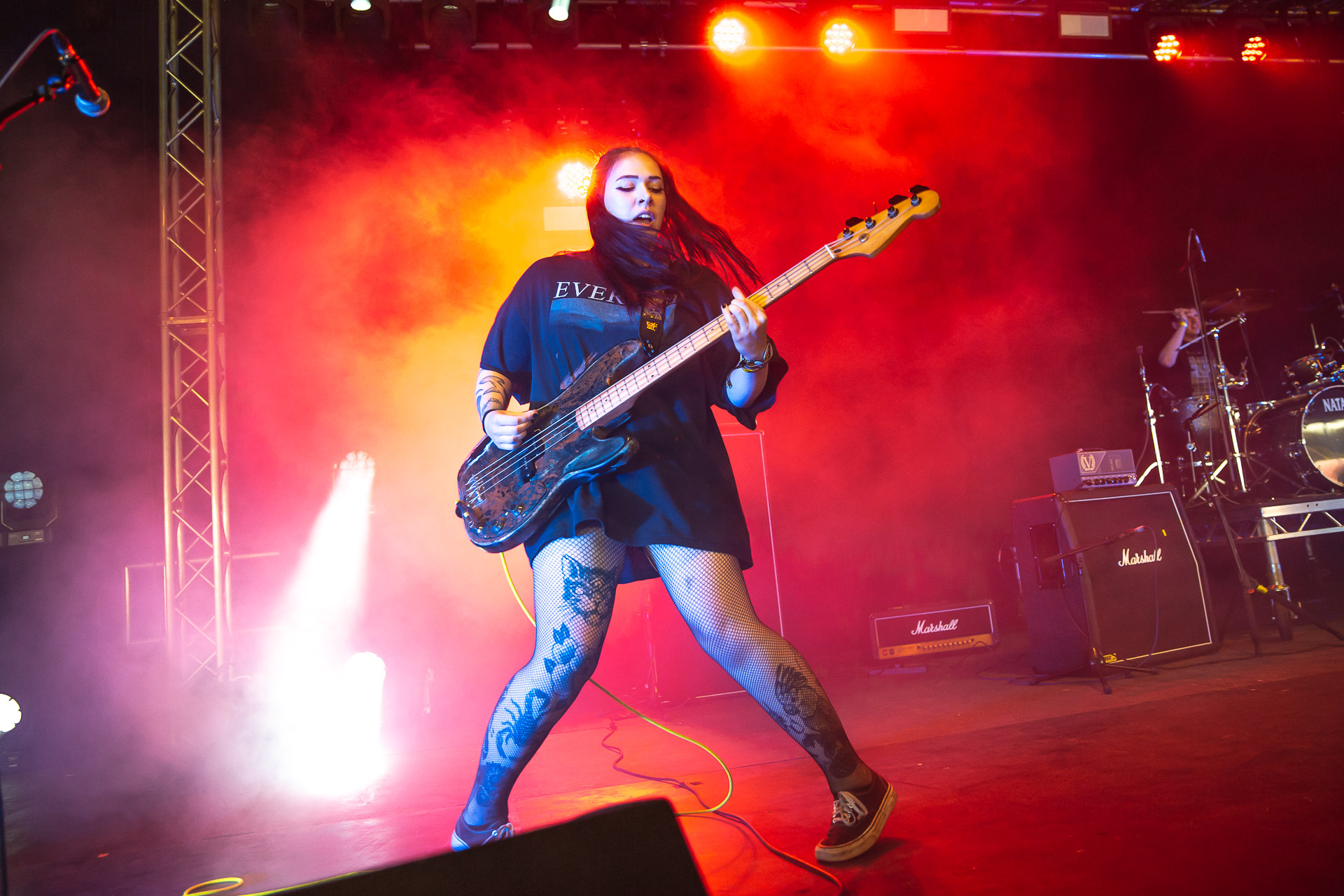 Manchester punks Witch Fever sadly couldn’t make it due to illness, but Cheerbleederz helped to deal with the sadness. They came on stage to play a show for the first time in 2 years and a half in adorable outfits: matching blue tops and clown hats have never looked better. “By coming here and watching us, you made us the happiest clowns in the circus,” they declared mid-set. If you’re into indie-punk songs with sad but relatable lyrics and fun melodies, they also announced that their album is coming out on 27th July – give it a listen when it’s out!

The perfect end to such an exciting day of music was Cassyette’s set. She’s one of the most exciting UK artists at the moment and her Neu Stage headline slot was totally deserved.

Welsh band James and the Cold Gun have been touring with Al Jones, who at first played bass for them but was playing guitar at 2000Trees. Although not officially in the band, she stole the show with her guitar skills and by being “the coolest person ever” according to the band’s guitarist James Biss. 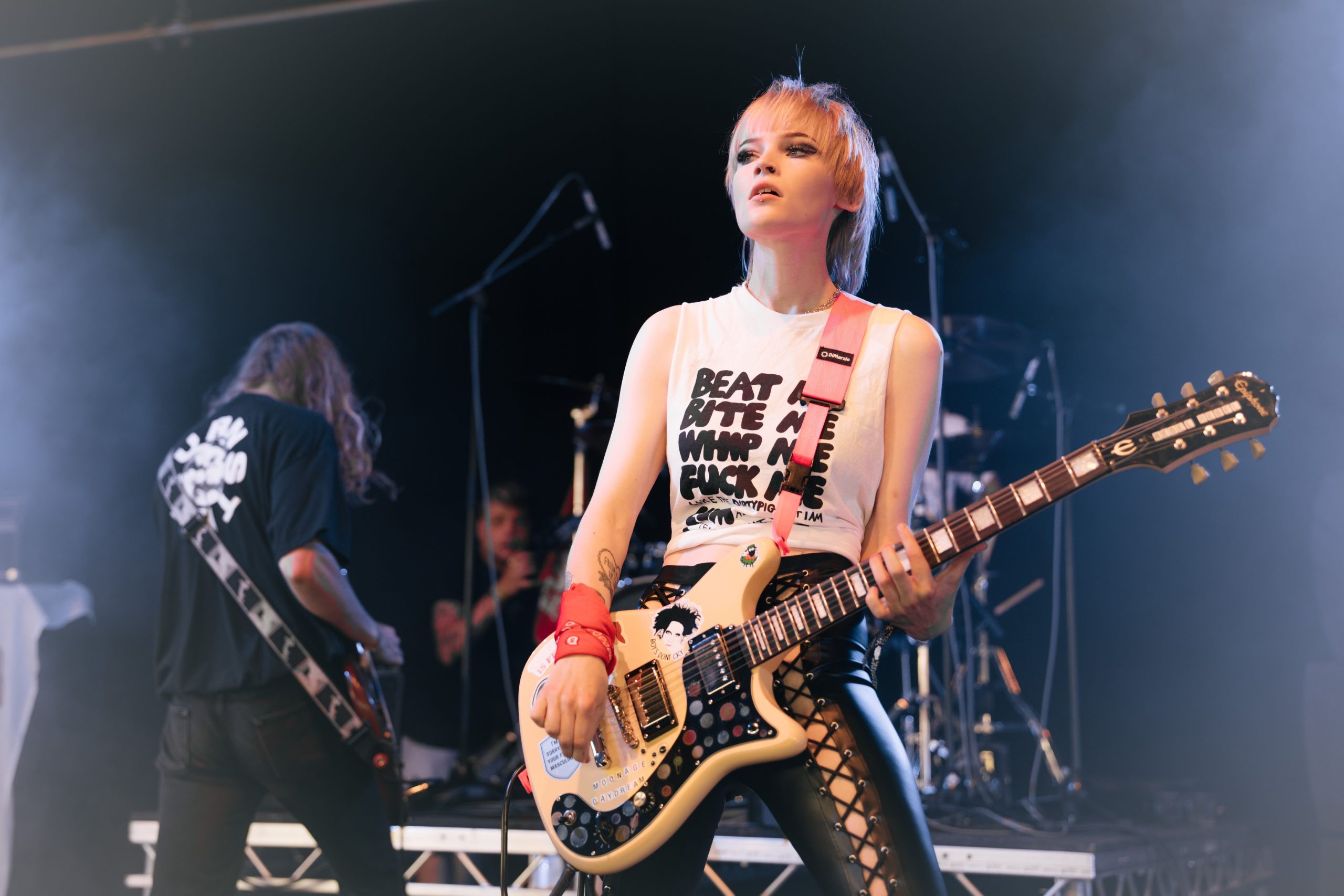 Petrol Girls were mind-blowingly good. Getting into the the Cave tent to watch them was impossible because it was so full, but people were still enjoying their set from outside. Frontwoman Ren gave a powerful speech about abortion before performing their track Baby, I Had An Abortion, informing the crowd that abortion isn’t actually completely legal in the UK and can only be done if doctors believe that it’s a safer option than continuing with the pregnancy. This situation is worse than it was in the USA before the Supreme Court’s recent decision, so Ren gave a shoutout to European organisation Abortion Without Borders, saying “we need to push for abortion to be fully decriminalised in the UK” because “abortion is self-care”. It was a very powerful speech, and it was great to see that no members of the crowd left after hearing it, which is what happened when US artist Halsey made a similar speech in Phoenix. That’s another wonderful thing about 2000Trees: the sensible people that attend the festival. 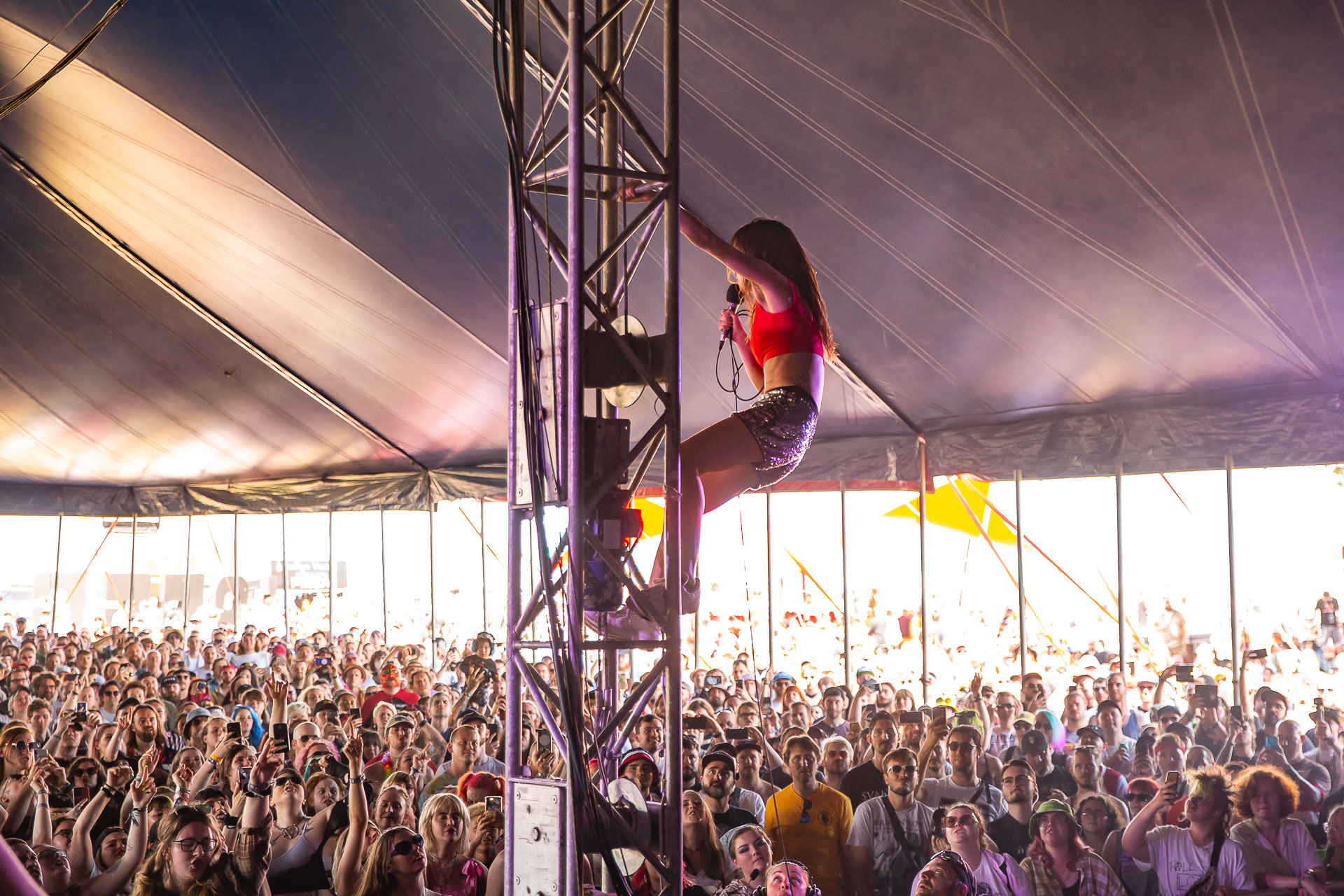 Saint Agnes rocked the main stage and towards the end of the night, Tokky Horror brought a big party to the Forest stage. They played a fun, sexy set that got everyone dancing.

Saturday’s lineup was full of female and non-binary artists, seeing them all was impossible. However, here are some that put on a great show:

Queer Irish band CheryM were a big highlight of the whole festival. They are talented, charismatic, and funny too; what more could you need at 11:30am on the last day of the festival? You heard it here first: they will be the biggest pop punk band around.

Lizzy Farrall‘s set was fun but what truly made it was the outfit change at the end. She performed most of her set in a white outfit, just to change into a black dress and lots of fake blood at the end. When they came back on stage, the entire vibe changed: she performed a heavier, sexier song to go with the look and it was incredible. 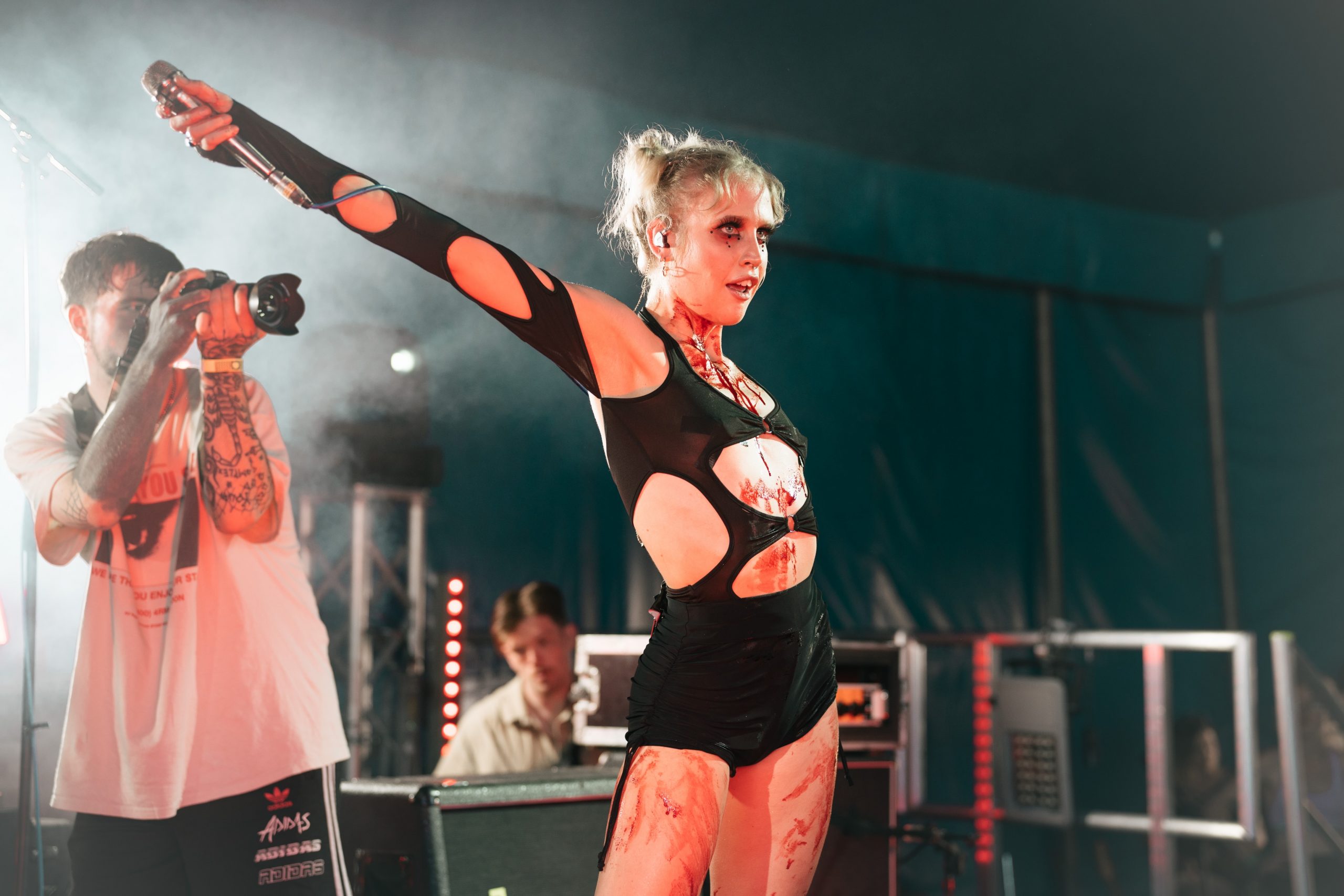 Gen and the Degenerates are also up there with the best bands that played over the weekend. Watching them somehow felt like watching the biggest band in the world and watching your best friends’ band at the same time: their talent is obvious, they make excellent punk music with great lyrics but they also made the audience feel at home. Perhaps performing comes natural to them, as it didn’t feel like they were trying hard to put on a show at any point. Ironically, that’s what made it a 10/10 performance.

Nova Twins playing the main stage was so well-deserved, but the sound sadly wasn’t the best. You could hear them – it just wasn’t as much of a party as it could have been. Nevertheless, the duo still put on an explosive performance, mixing their latest songs with some old bangers too. 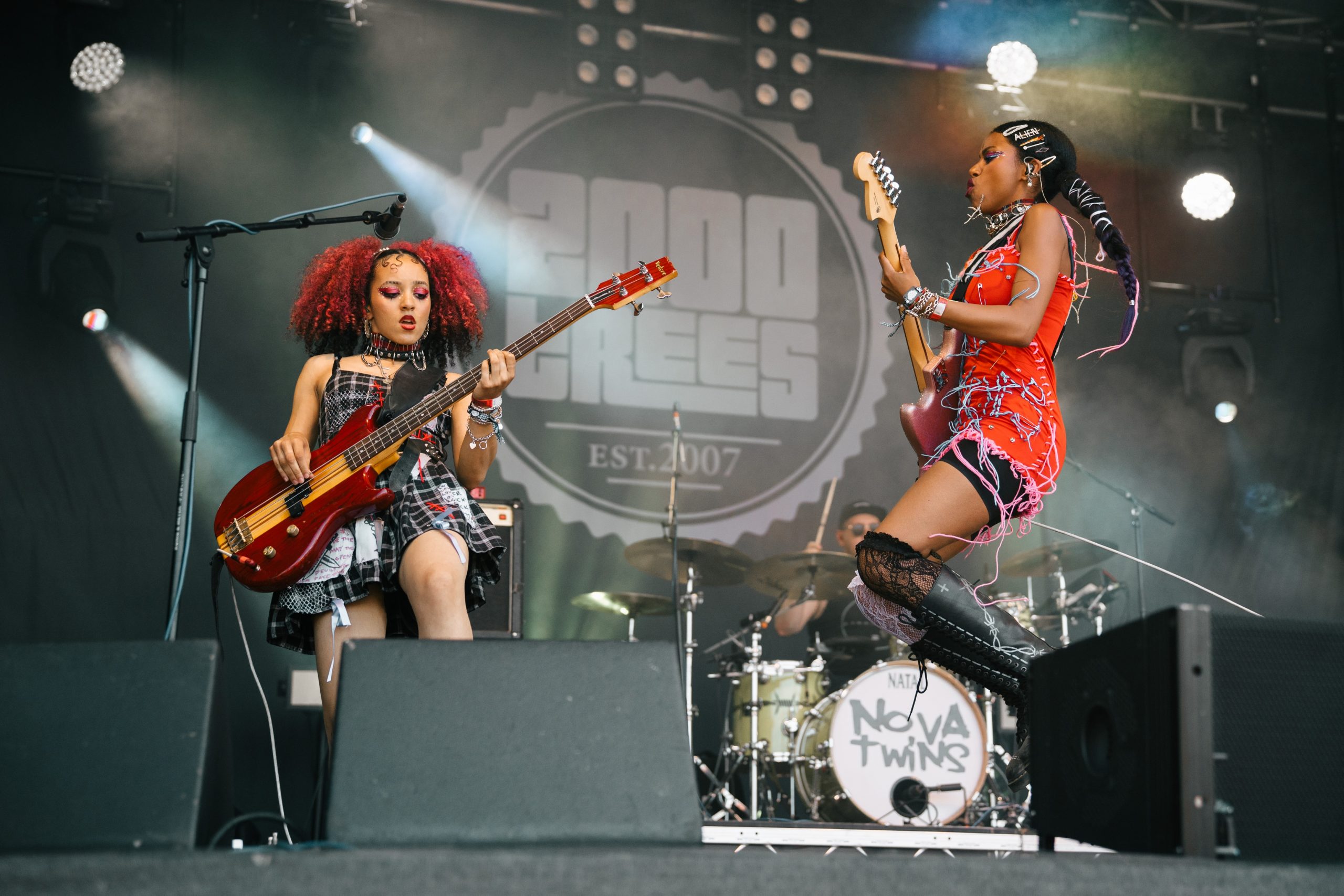 Sadly, The Regrettes and LibraLibra also ended up cancelling, so this review ends here. Many other artists and bands of all genders were worth watching, and if you missed out, don’t worry – there is no doubt that next year’s lineup will be just as good. Tickets for 2000Trees 2023 are already out on Dice, see you there.

You can check out all the bands mentioned in this playlist: https://open.spotify.com/playlist/1PUsYZ0dP5W2xGU0wve1YQ?si=9cbcb600d2b94a4a