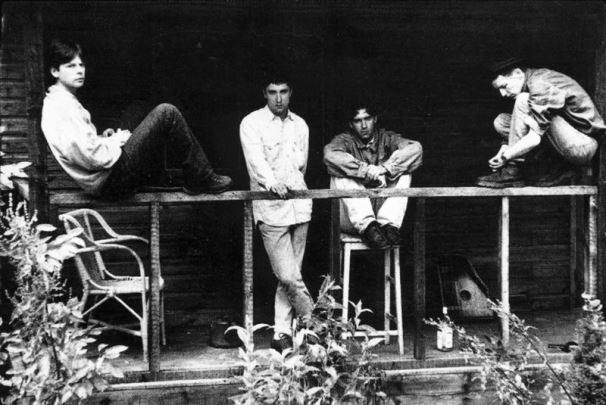 It’s the early 90s and The High are on the periphery of musical infamy, but are suddenly dropped after a disappointing second album. Now, ahead of their first big gig in 23 years, singer John Matthews chats to Ben Cook about why they never broke through, as well as their offbeat following in Japan.

So why are you reforming now?

For me, I wouldn’t say I was disillusioned, but- I just wanted to take a break. It just so happened that break ended up being a lot longer than I thought. If we’d been asked maybe 10 years ago I probably would have said no. But the guy who’s putting on gig was our original tour manager. He asked us to do it because he had a connection with us, so we looked at the line up and thought we could probably make a good addition to it.

Why aren’t the two other original members joining the reunion?

They both declined for different reasons. I’ve not actually spoken to either of them in years. Me and Andy didn’t really have contact with Si. Chris declined but sent Andy a really supportive email wishing us all the best so I sent him one saying thanks and that’s got us talking again, so even though we’re not all playing together it’s got us all back in touch.

Can you think of any reason why you weren’t as successful as similar bands at the time?

I’ve spent a bit of time pondering this, as I suppose you would. I wouldn’t say we felt hard done by, just maybe we were unlucky or there wasn’t enough room for us. With Madchester we were linked to a scene we didn’t feel we were a part of. Music industry advertising has to put everything in a box but they didn’t really have anywhere to put us. We weren’t going to create our own genre or scene so we just ended up in that one. Obviously there was a lot of bands coming out of Manchester so I suppose, being around at the same time, it seemed quite obvious to link us to that. But I think musically we were completely different. I don’t know whether people got what we were doing as much as other bands around at the time – bad luck might be one aspect of it but I don’t think that’s the main thing. It might sound cliché but I think we were sort of hidden somewhere amongst all the rest and just didn’t get the breaks. I don’t know if that’s a proper explanation.

So you don’t associate yourself with the Madchester scene?

I’m not saying I wouldn’t want to be associated with it, because its testament to the time and how many good bands that were coming out of Manchester. But I don’t think we really fitted into that musically. I definitely wouldn’t stand up and say we were part of the Madchester thing, because really we weren’t. We were just trying to do what we wanted to do, and not try and fit into anything – it was other people that wanted to put us in that box.

Did you know you had a following in Japan?

Funnily enough we did. When we were signed to London our A&R man used to send us envelopes of stuff labelled ‘John Matthew’s Japan High Stuff’. In one this girl had written and drawn some stuff saying how the album had affected her, and it was unbelievable the way she’d done it – like artwork. It was all very deep and very Japanese-y in a way – in depth and articulate. She sent me a book about Kyoto Gardens as well as some socks which she’d embroidered my name on! I’ve never worn them but I’ve still got them. I think if the band had gone to the next level then maybe we’d have gone and given it a go in Japan, I would’ve loved it.

Has the music industry lived up to what you expected?

That’s difficult. When we first started doing this and could see something was going to happen with it, to me it was all a great experience. But when we did the second album and got dropped… things like that are pretty tough to take. You can’t not take it personally when people don’t want to get behind your music. It was all a very exciting period and I was walking around with my head in the clouds thinking this was the greatest thing that ever happened, and it was, but things come to an end and I hadn’t anticipated that. I suppose I didn’t think it was going to be – I wouldn’t say cruel, but – as decisive as it was.

The High are playing Manchester’s Gigantic Indie All Dayer on the 23rd May.