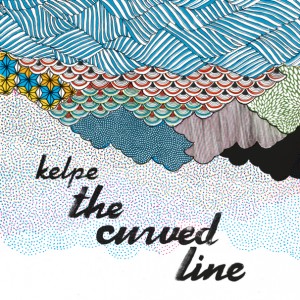 If you come across a musician who you learn was into skateboarding as a teenager, you might lazily assume that they play punk or hardcore. Well not Kel McKeown. He headed to his bedroom with a Commodore Amiga and a tape machine. And years later here we are. Recording under the name Kelpe, McKeown has been releasing beat heavy music for most of the century. ‘The Curved Line’ is his first release on his own label, Drut.

Anyone with even a vague knowledge of the output of Warp will be find themselves on familiar territory here. Much of the warmth and playfulness associated with Boards of Canada and Plaid are on display, particularly on ‘Drums For Special Effects’ and opener ‘Doubles Of Everything’. However, it’s on the tracks where unexpected and eccentric influences are found that are the most intriguing. McKeown’s love of the pioneering German sounds of the 70’s is evident on tracks like ‘Valerian’, which sounds like Harmonia leaving the studio to play Frisbee in the sun. The synth washes of ‘Canjealous’ hint at Tangerine Dream. ‘Sick Lickle Thing’ begins as a beat-heavy head nodder before the listener is confronted by jazzy drum breaks, a trick beloved of Four Tet.

With music in this genre, many expect experimentation. To be honest, there’s not much here that will challenge most listeners. That’s not to say there aren’t moments of weirdness, such as the near-garage tempo of ‘Red Caps Of Waves’ and the smiling, hissing synths of ‘Drums for Special Effects’. But accessibility can matter. It’s the reason that artists like Boards of Canada are beloved and imposing electronic acts like Autechre are more often respected than listened to. You’re more likely to stick on ‘Geogaddi’ on a long drive than, say, ‘Confield’. This is an album with many emotional moments, in a genre that can seem cold and clinical at times.

Like it’s cover art, ‘The Curved Line’ seems to be made up of random shapes and colourful patterns that fit together, somehow seamlessly. If Thom Yorke had released this album instead of ‘The Eraser’, you would have all shit your pants.

‘The Curved Line’ is out on Drut Recordings on August 28th

Kelpe will be playing at The Waiting Room, London on September 17th