Just look at that sleeve. You know what you’re going to find inside. And the name Claypool tells you it’s all about the bass (the bass, the bass) – but not the deep sound of, say, Jah Wobble. Claypool attacks his instrument, picks and hits chewy higher tones, often little niggling patterns like those he favours when playing in Primus. 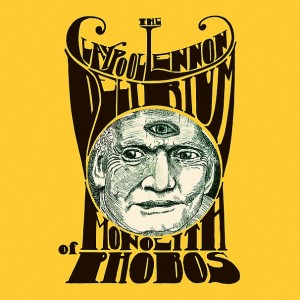 The few times I’ve seen him live he has favoured a well-drilled, tight, band, smartly dressed and all clad in pig masks. There’s a deep current of psychedelia in Les Claypool. Take the opener; The Monolith Of Phobos – as late-sixties psych as you get – all 2001: A Space Odyssey and that. Up next is a mini-suite about a cricket’s journey; a groovy and bouncy insistent fable with Farfisa organ and multiple layers. The song is virtuoso bass and silly voices.

A song about a peeking Tom highlights the Zappa flavours of Claypool and shows Sean Lennon is as warped as Claypool. “Sean is a musical mutant after my own heart,” said Claypool. “He definitely reflects his genetics–not just the sensibilities of his dad but also the abstract perspective and unique approach of his mother. It makes for a glorious freak stew.” Elsewhere Les speaks of Lennon as if he is the apprentice but, whatever the dynamics, the result is fun. Lennon’s guitar is more melodic than Claypool and his drumming makes a change – normally Claypool plays his own on disc.

There is a very British psychedelia feel to the songs. Leave aside Claypool’s in-yer-face bass and you practically have The Small Faces. Captain Lariat could almost be off Ogden’s Nut Gone Flake. There is a martial beat, serious vocals, alongside chunky bass. Lennon’s guitar is up front on the dark Ohmerica; “If we stop shopping, the terrorists win”. Oxycontin Girl is equally dark, a sing-song tale of heroin and prostitution. The low-key Bubble Burst (about childhood’s end) reminds me of Pink Floyd’s Obscured By Clouds before the album is bookended with an instrumental with distant choral effects, No Underwear In Space, a closer to the opening Monolith Of Phobos.

The whole is a strange concoction, fully flavoured of the psychedelic sixties, while wearing today’s aesthetics and the disciplined structures of Frank Zappa. Long live strangeness.