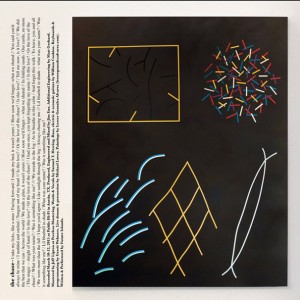 Chances are that if you are reading this, it’s likely that you were first introduced to Future Islands thanks to their now infamous appearance on The Late Show with David Letterman in March 2014. The landmark performance of single ‘Seasons (Waiting On You)’ went viral but its appeal was something that predated YouTube. The thrill of seeing a band announce themselves to the world with one iconic appearance on a television show. The Smiths on Top of the Pops, U2 playing at Live Aid, Nirvana on The Word. Sometimes the combination of an iconic appearance on television can do more for a band’s profile than a years worth of touring. And Future Islands certainly made their moment count. Pretty much unknown outside of the world of Pitchfork-reading music geeks, frontman Samuel T. Herring gave a performance full of broiling passion and a palpable ‘last chance saloon’ flavour. And why not? If not now, then when? Three albums and nearly 1000 shows into a career that hadn’t taken them off the toilet circuit of the United States, Future Islands first appearance on television created buzz for their then upcoming album and led to them playing at sold out venues in the UK and Europe.

Herring is the focus, there’s no question. As good a track as ‘Seasons’ is, it was ‘The Moves’ that were the talking point on Twitter and the blogosphere. One theory was that he was somehow holding the band prisoner, forcing them to back his club singer croon with synths and bass. Neil Diamond fronting Joy Division. The spirit of GG Allin lived on in the unexpected guttural roars. He lived the performance, miming the actions for the word ‘taste’, slapping his chest when singing about himself himself. You could tell by his wild eyes. He meant it, maaaan. Letterman loved it, and referenced the performance in subsequent shows. And Herring and Co. were off and running. Album ‘Singles’ was a success, appearing in the higher reaches of many end of year polls.

Coming full circle, the band’s first post-‘Singles’ release was launched via their second Letterman appearance. Musically, the track is more subdued than much of the material on ‘Singles’ but still has an intense smoulder, despite the intro sounding like a cross between early Depeche Mode and ‘Hazard’ by Richard Marx. Yeah I said it. Vocally and lyrically, there is a bruised, naked masculine vulnerability in Herring’s pleas. ‘I take my licks like a man’, he sings, half defiant, half beaten. ‘Is this love?/Or the love of the chase’. After four albums of heartbreak, Herring is still an old fashioned romantic. This Letterman performance was very similar to their breakthrough, Herring dancing in a near identical manner but this time seeming much more relaxed and confident. Without the shock of the new, it’s just as well the track holds up as a decent indie pop song. There are better tracks to be found in their back catalogue but ‘The Chase’ works as a release to keep the band fresh in minds and perhaps give a taste of what is to come in the future. The immediate future includes support slots for that other indie hip swinger who dabbles in the whole vulnerability thing, Morrissey. It’s a good fit.

‘The Chase’ b/w ‘Haunted By You’ is available on 7’ vinyl through 4AD on June 30th, available for download via iTunes now.

Future Islands seemingly never ending tour returns to the UK in September. Having twice now purchased tickets for their two previous Glasgow shows then subsequently had to sell them due to other commitments, I’m determined to make it this time….