It’s more than 15 years since I first heard the Bellrays on disc and live and, back then I played that CD twice a day for a long time. Loud, raucous and with a bad attitude, they combined (and still do) LA garage rock with the amazing soul voice of Lisa Kekaula. 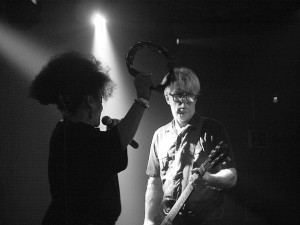 Now, in 2018, Lisa’s voice is still forceful and full of intent. Bob Vennum’s guitar is still messy but just right, played almost off-hand. A big shout for the great drums and the very into-it bassist but the core of the show has always been the Lisa’n’Bob double act. 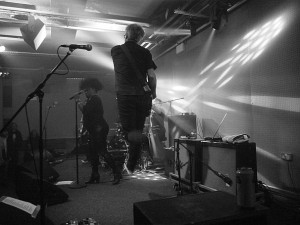 Starting off slowish with bluesy new material from the recent album, they gather momentum rapidly and Lisa’s stern warning that “this is a rock show” come true. Maximum velocity is reached and the gig thunders along, rarely pausing for breath. The garage rock intensity shows in the leaps that Bob takes and the way Lisa spins on her heel. 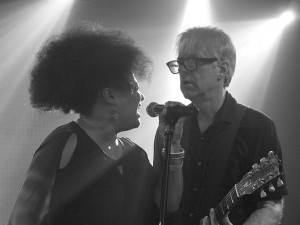 It isn’t all rocket speed. ‘Perfect’, off the new set, is extended to instrumental breakdowns and solos; as is the closer, ‘Black Lightning’. The latter sees Kekaula directing the guitar and bass in alternating leads at lightning speed. The feeling of the gig is intimate yet well polished–they’ve constructed a proper show with pace that sustains an hour and a half easily. 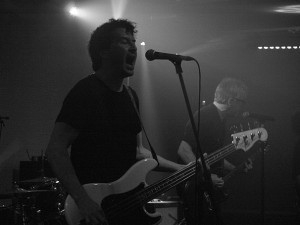 There is very little sound reinforcement, so the stage sound is the audience sound–very clear and very exciting, with the instruments positioned side to side. There’s the rich bass sound to the left–smiling madly and enjoying himself. Bob is to the right, squalling and picking articulate yet chunky solos. He regularly gets so excited that he jumps up and down before reverting to his lugubrious expression as Lisa stalks the stage. 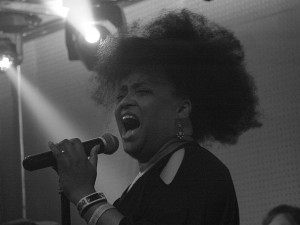 This band doesn’t tread water, there is almost nothing from their early career: we get the new album and a selection of relatively recent things. It’s a healthy attitude and quite possibly the reason the band continue to move people and feel inspired themselves. The gig tonight is inspired, a huge step up from the solid gig they did a couple of years ago at the same venue. There is something about the soul power meets electric guitar that wins hearts and feet.

Special mention has to go to the opening act: Fuzzy Vox. A Parisian trio, they channel the spirit of electric rock and roll perfectly. The frenetic guitarist, all energy and elbows, proves chatty and relaxed between songs. He jumps and does the splits as the shirtless drummer pounds skins and drips. Like the Bellrays, they too have a happy bassist and the crowd are impressed.

A band to watch.