There is some debate about who invented minimalism. Some name Terry Riley, some name La Monte Young but there is no question that the shape of modern music would be very different without Riley. Imagine modern film without Philip Glass or Michael Nyman, imagine almost any soundtrack without those microtonal shifts and recurring patterns. Imagine a world without Taverner or Gorecki. Quite an influence….

Not one to sit on his laurels, despite having created a new sound world with “In C”, with its formulas and cycles, Terry Riley has long moved on to other musical planets. Very recently a concert of his was described as be-bop Bach and his work with his son, Gyan Riley this year sounds fascinating.

In a select few dates, the two Rileys will play together across England.

Tickets on sale now via:
https://www.seetickets.com/tour/terry-riley 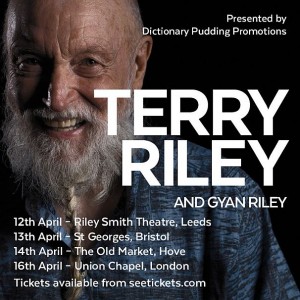