Susan Tedeschi and Derek Trucks are American jam-band royalty. Derek is the nephew of Butch Trucks, the recently deceased Allman Brothers Band drummer, and played with The Allman Brothers for many years. Tedeschi sang with The Other Ones, the band The Grateful Dead formed after Jerry Garcia died. Both of these are the Jam Band equivalent of being blessed by a whole swarm of deities.

That’s leaving aside their very considerable musical talents. Trucks is a master on the guitar, particularly on unusual scales and will drop into an Indian raga or an extended bout of guitar strangling at the drop of a hat. He has a taste for jazz and, with his own band, frequently plays covers of John Coltrane. Tedeschi is a great blues singer and has also worked with the Transatlantic Sessions on traditional themes. With a small clutch of studio albums and a double live under their belts, why is there another live album? Because they fly live; the interactions and atmosphere add another depth – these are far from the studio interpretations. 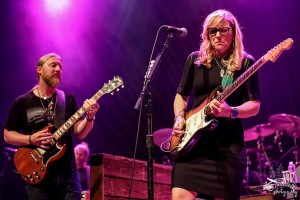 The jam band credentials are writ large here, with songs averaging out at eight minutes a piece. I don’t find any of them too long; the tune will be extrapolated with improvisation, guitar solos and added groove. The result is a huge fusion of funk, soul and jazz, with the weight of twelve musicians tempered by the incisive steel guitar of Derek Trucks. Tracks range from Funkadelic-style funkathons to Derek & The Dominoes slide guitar extravaganzas to Indian-style ragas to Philly soul to Motown stompers to wah-wah funk reminiscent of Miles Davis’ On The Corner. Leonard Cohen’s Bird On A Wire is taken slow and turned into a gospel song. The combination of smooth tunes with jazz-inflected funk-soul makes for a big and very listenable combination. 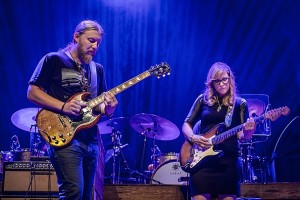 A double CD set, documenting September 8th, 2016 in Oakland, just over the bridge from San Francisco. It just so happens it was at the Fox Theater, beloved of Grateful Dead fans. There are two CDs and a DVD. Between them they cover the whole show but, amazingly, it didn’t all fit on two CDs and 6 songs are left off – mostly covers like Dylan songs, Miles Davis’ Bitches Brew, etc. I guess they want to focus on their originals and the result is great, with something for the feet and something for the lover of face-pulling guitar solos. Purists will note some slight re-ordering of the tracks but if you’re after a solid blast of music, rather than a simulacrum of the night itself, your time will be well-spent here.