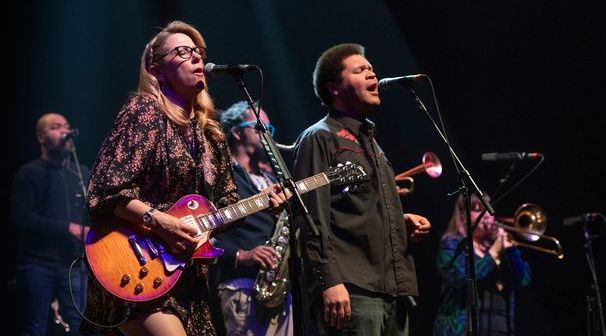 There’s not much to add about the concept behind this album beyond what we said in last month’s review:

We have here the second instalment of a four-album set from a warm, soulful, bluesy, jazzy band with amazing musicianship.

I was lucky enough to hear the Derek Trucks Band play, some years ago, and his guitar work was astonishing – particularly his showpiece; a twenty minute extemporisation on ‘My Favourite Things’, inspired by John Coltrane. Susan Tedeschi is his equal in having amazing guitar and a fantastic blues voice. They surround themselves with nearly a dozen top musicians and make blues-soul to melt you.

This continues the songs and music set around the Persian tale of Layla and Majnun, though I get focussed on the music and individual songs without getting a sense of this being an over-arching story. As with the last, it is 36 minutes long, since Trucks considers Axis: Bold As Love a model for the perfect length of an album and we’ll eventually end up with a tetralogy two hours and twenty-four minutes long, making for an outstanding evening in front of the hi-fi or smart speaker.

They squeeze seven songs in this time, from four to nine minutes long. There’s some punchy reggae sounding like late-period Bob Marley-era Wailers, some swamp blues, down and dirty. A nine minute jazzy excursion with Spanish sounding guitar (the Andalucian part, where the Moorish heritage is strong) and sweet vocals is like bathing in dark chocolate, then more blues with dobro and slide guitar. Gospel and ballads round out the package. It is notable that it isn’t all about the titular band leaders – songs are credited to up to three other band members, Tyler Greenwell, Gabe Dixon and Mike Mattison. You’ll hear up to three guitars in a piece, up to four percussionists, multiple vocalists, organ and brass yet it’s never crowded – though it is rich and warm.

This is an immersive sound and something capable of reaching all sorts of audiences; it is grown up music, outside genres and capable of winning attention from a wide spectrum of music-lovers.