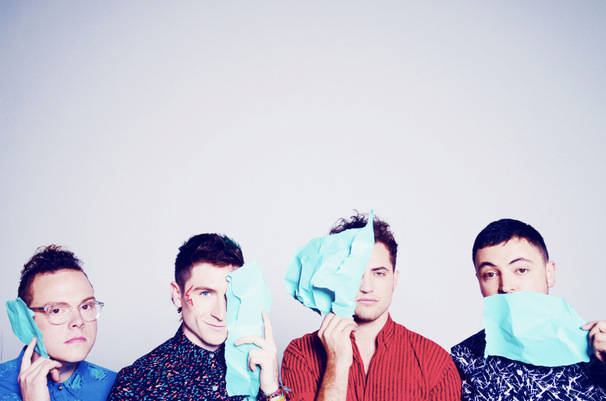 SO TALK WITH YOUR BODY!

I first heard of Walk the Moon at the start of this year, I was going through a pretty rough time, a friend from the States put a song on and said “SHUT UP AND DANCE WITH ME”, so I did, and I’ve been hooked since. They’ve worked so hard to actually get somewhere, it’s now really paying off. Such soaring melodies that take me back, probably back to the eighties. I can’t write this and not mention “Anna Sun” from their album titled simply “WALK THE MOON” (they are not keen on anything other than WALK THE MOON) just check it out, if you haven’t already that is.

The full album, it’s just so uplifting for me. I struggle to find a song that I don’t actually like, you know how on some albums there’s usually at least a couple to skip past, well for me I can listen to Talking is Hard all the way through, every single time. It’s not perfect, but it’s a big improvement after recently catching up on their previous work.

I won’t bore you with my opinion on every song, but I will with a few standouts ill start with the opener,

“Different Colours” defines the humanistic nature of the music these boys produce. A very solid opening track and doing a stellar job at supporting the LGBT communities. A potential single I feel. They take this serious and it shows in both the lyrics and their voices.

“Sidekick” feels like quite an experimental song, but I enjoy it. Stick this track on, and ask your her/him to “Carpe Diem” with you all day long. Such a sweet little love song, and so upbeat.

“Shut up and dance” this is the single, and an anthem of the summer that’s gotten them noticed over here in the UK, I cannot listen to this and not sing along or move my body, I don’t think it’s possible. It’s an addictive, pop-rock song. I dare you to try and sit still when it’s on.

“Avalanche” “one glance and the avalanche drops, one look and my heartbeat stops” These lyrics…. Are just far too cute. Nicholas Petricca’s melodic vocals fit so well with this song. The first time I heard it hit me with a bang, after “Shut up and dance” this is my most played track from the album.

Overall, WALK THE MOON’s Talking is hard is incredibly good and for happy times…, offering up a nice mix of electro-pop and, retro styled indie rock. With a couple of exceptions most notably (“we are the kids”) but Walk the Moon are good at what they do and deliver a confident and exciting style that I’m sure will have the masses as pleased as I am, given time. The guys have put so much into this album and they deserve the credit they’re due. Talking Is Hard is the perfect gift for summer. The album is out now!

Check out the forthcoming tour and find out where to buy the album here: http://www.walkthemoonband.com/