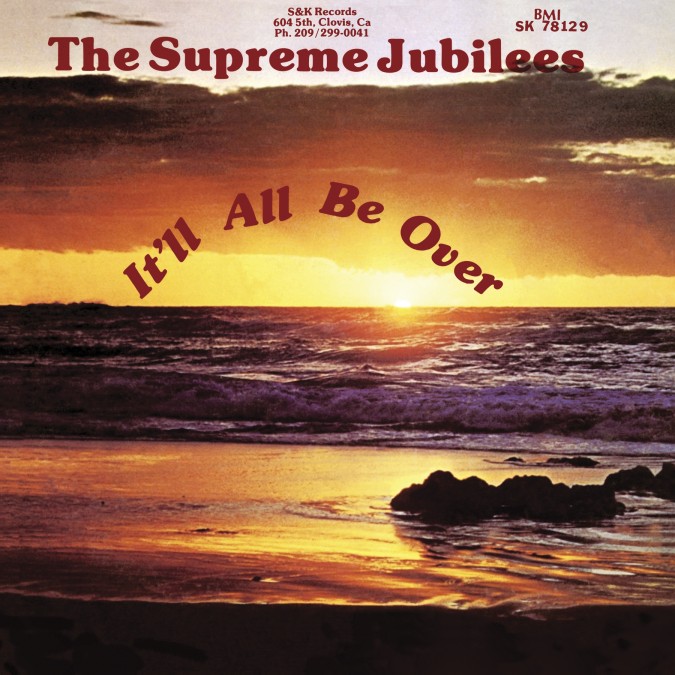 Does talk of Jesus make you come out in hives? If so, you’re missing something special. In recent years, increasing attention has been given to so-called rare gospel. Away from the glare and pizzazz of mainstream media, Christian artists and groups were making music filled with the Holy Ghost, influenced as much by Melvin, Mayfield and Brown as they were by the desire to spread the word. Labels such as Tomkin’s Square, Soul Jazz and Numero have all been releasing comps of mesmerising gospel music and premier league archivist label, Light in the Attic, has joined the congregation, digging out the whole albums. Their latest release by The Supreme Jubilees is the most recent coin in the offering plate.

Coming from the Witness Jesus Christ Church in Fresno, CA, in 1978, The Supreme Jubilees were formed from two families; the Kingsbys and the Sanders. Adding guitarist, Larry Price, the band developed their sound in church before taking it on the road. The album was, as is so often the case, an opportunity to raise capital while away from home. The recording process was a bumpy road, struggling to find an engineer that would reflect their desire to be ‘real heavy at the bottom end’. Nonetheless, 500 copies of the completed album were pressed and sold at concerts up and down the West Coast. Sadly, pressures of touring, alongside jobs, families and daily grind ensured that ‘It’ll All Be Over’ was a fitting title to their first and last LP.

The nine tracks on the album could be said to cover three bases; traditional gospel, disco, and slow grooves. The first of these is found on ‘I am on the Lord’s Side’ and features the typical call and response vocals and upbeat rhythm that has been the mainstay of gospel music from the 30s onwards, evoking holy roller churches and/or James Brown in the Blues Brothers depending on your point of reference. It’s fine, but there are finer specimens out there for those prepared to dig a little (Sam Cooke’s Soul Stirrers, for example, or The Five Blind Boys of Mississippi). Nonetheless, the verdict is good but not essential – it never catches the sweaty depths of emotion required to properly carry the listener into ecstasy.

Second, three tracks attempt to appeal to the disco scene. Again, it is not that these tracks are bad, so much, as that they are disco-by-rote rather than by feeling. Much like ‘Lord’s Side’ above, it retains too much control, too much contrivance. ‘Got a Right’ and ‘Stop Today’ both recall George McCrae’s brand of Floridian Disco, although the second is marginally funkier.

It is the third approach that is by far the most successful, consisting of five of the nine tracks present. Offering a sacred alternative to The Spinners, or Teddy Pendergrass, The Supreme Jubilees relax and spread out a little, letting the spirit move them. On ‘Thank You Lord’, lead vocalist Dave Kingsby digs deep over a steady groove, while Price’s guitar, phased and wah-wah’ed to perfection recalls Curtis Mayfield. Worth the price of admission alone, the title track ‘It’ll All Be Over’ is gorgeous. Driven by a slow electric piano riff that brings to mind jazz keyboardist Bob James, the lazy vocals evoke powerfully the pacific sunset depicted on the cover. The refrain washes over the listener, comforting us – it’s all going to be alright.

In all, Light in the Attic have done us a service in bringing this album to our attention. While not every track is killer, it shows the depth and soul that these bands, toiling away in obscurity, offered. At its best, it offers a beautiful, and dare I say it, sensual spirituality than even this tired, grumpy, old atheist can’t resist.