What does a reader want from a review? A detailed note-by-note comparison with the recordings and previous gigs, or the opposite extreme, the sensations of a neophyte? It’s the latter tonight and the sensations are amused, thrilled, puzzled and impressed. 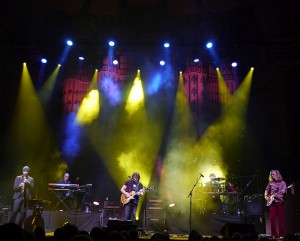 I don’t really like Prog, or so I tell myself. The corner of my record collection that houses The Grateful Dead, Zappa, Phish, Umphreys McGee and Pink Floyd tell another story. Prog is twiddly, pretentious and it shows off – which is what this gig does, and it was great. It showed off and impressed with sound, light and precise control. Pretentious, yes, and hitting the goals it aims at. 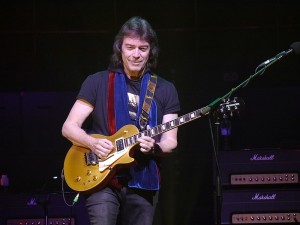 Held in the fabulously Victorian Leeds Town Hall, backed by a huge organ and flanked by inspirational quotes (“Labor omnia vincit”), the band was faced with a full hall of grey hair. At half a century old, I was finally nearly the youngest audience member and, from the reactions, the crowd were mostly there to hear the music of a band Hackett left nearly forty years ago. 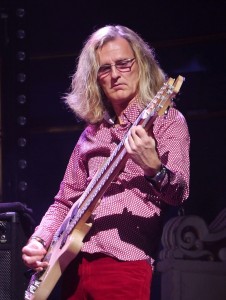 It must be Prog when a gig opens with a vaguely Eastern intro and moves into a tune containing a flute. Steve Hackett looks confident and relaxed to be centre stage, focussed on his guitar. Head down, he concentrates and pours out liquid, lyric lines, reaching for the sustain bar on his Fernandes guitar frequently. Expressions of pleasure or mild anguish pass across his face. Into the second song and we have wolf howls – one off his recent album clearly. Moving on into Every Day, he introduces the band and explains the first set of the evening is his: “Solo stuff. So-called solo stuff, ‘cos a ton of bands helped me put it together.” Moving on, we wonder at the midi treatments to his guitar and chorus effects. Before long it is time for some acoustic guitar; “Jacuzzi”, being supported by his younger brother on another flute. Two flautists in one band – that’s proper Prog. The second from last song of this set becomes a jamming flight of fancy on the back of a soprano sax and precedes the closer, dating from the time when rock musicians fancied themselves as composers, mixing maximum rock heaviosity with classical allusions and through-composition. With eighty minutes under his belt yet less than ten songs played and time flying past, it is time for a break. 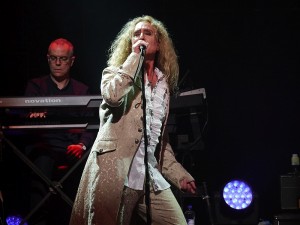 On the band’s return to the stage, it is time for music from the half a dozen Genesis albums Hackett contributed to. However happy the crowd was before the break, this is the stuff that gets the big reception. It’s a cover band but, given Hackett’s thirty extra years of experience and modern amplification, it probably sounds better than Genesis did at the time. Songs from Duke, Invisible Touch and so on are mercifully absent and the spotlight is on the theatrical, complex, sometimes story-led, early material, glorious in its silliness and requiring a surrender to the mad invention (and the sweet guitar of course). 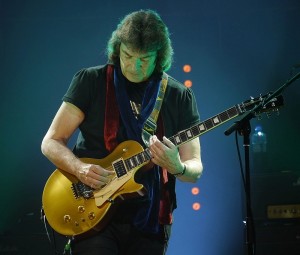 The drum sound is impressively full and deep, while the keyboards drop in vintage sounds. Wonder of wonder, they have a Peter Gabriel sound-a-like in Nad. Going for a Steven Tyler at the court of Louis XIV look, the Sun King impressionist makes a sound that, if you close your eyes, is a passable version of what Gabriel would sound like, thirty-five years on. Go, Nad!  The bassist, one of The Flower Kings, in red loon pants, straps on a double-necked beauty and alternates bass and rhythm, Songs go on for ages but speed past, time flies, solos are indulged and small historic details are briefly fleshed out by the gentle voice of Hackett. A mere eighty more minutes later, it is time to go home, but not before the Prog-tastic treat of a drum solo in the encore. 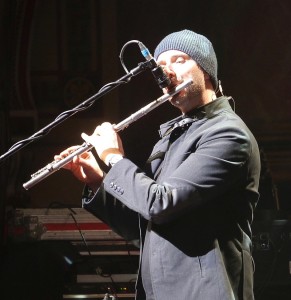 I was worried about the prospect of tedium in the series of ten-minute-long songs from a cover band but took the risk and, as I’d hoped, the magic of hearing music live, played by experts, made the evening an immersive experience, one where disbelief was suspended and musical fantasies indulged. That’s the thing with gigs – give them a go and the barriers come crashing down. 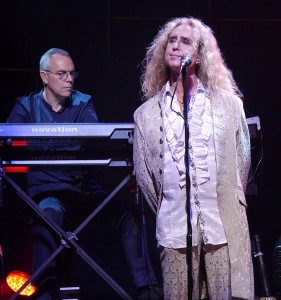 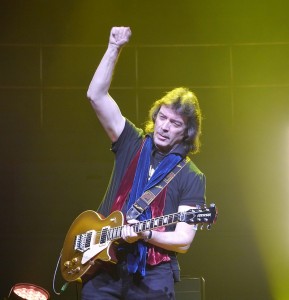