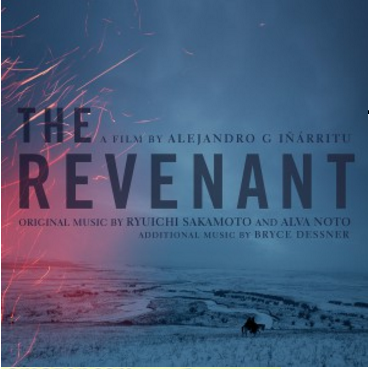 Ok, let’s be honest, there was no way this was going to be bad. Look at who’s involved; Ryuichi Sakamoto, Keyboard play for YMO, avant garde electronic magician and occasional film composer (The Revenant being his second effort with director Alejandro Iñárritu following Babel in 2006), Alva Noto, a frequent collaborator with Sakamoto and esteemed electronic producer in his own right and Bryce Dessner, a classically trained guitarist and multi-instrumentalist known for his work in The National and his soirees into soundtrack work and more classical means of composition.

Anyway, if you know the three individuals this work sounds as you might expect, long low-pitched string chords often used as a drone with a melody played over the top of it. “Goodbye To Hawk” captures the desolate landscapes shown in the film as well as the loneliness experienced by Hugh Glass. Sakamoto and Noto’s fondness for strange and alarming glitchy noisiness also shine through during tracks such as “First Dream” which features an odd plucked sound repeated throughout and ends with a long feedback solo. “Glass And Buffalo Water Travel” is underlain by the sound of stone moving against stone. Sakamoto also pays attention to detail in between the sounds most notably in “Second Dream” where he uses fluttering and hissing noises between harmonics, to create a large atmosphere, both calm and chaotic. The same effect is achieved in “Killing Hawk” where the sudden inclusion of violin strings frantically plucked creates a sudden danger in an otherwise slow and dark mood.

The three composers make much more use of traditional stringed instruments, and make great use of the wide dynamic range, often sweeping from quiet subtle sections to overwhelmingly breathtaking crescendos as in “Church Dream”. The tracks also have a woody tone to them, in order to encapsulate the rural, mountainous surroundings of Montana and South Dakota, both of which were featured in the film.

Overall Sakamoto, Noto and Dessner do well to create a broad, epic atmosphere that compliments the rest of the film excellently, and by itself, it could stand up as a great classical ambient album, but I’m not sure whether that’s high praise or the most insulting thing I could possibly say about a soundtrack.